Black Soldiers in the Civil War

In early June 1864, Private Sylvester Ray of the 2d U.S. Colored Cavalry was recommended for trial because he refused to accept pay inferior to that of white soldiers.

First Lieutenant Edwin Hughes of the 2d U.S. Colored Cavalry, recorded Private Ray as stating, ". . . none of us will sign again for seven dollars a month. . . ." 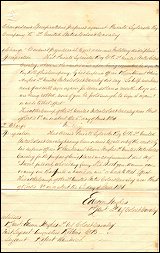 Later that month, Congress granted equal pay to the U.S. Colored troops and made the action retroactive. This increase in pay is indicated on Private Ray's Detatchment Muster Roll.