Black Soldiers in the Civil War

On July 22, 1864, Private Wilson Wood of the 6th U.S. Colored Heavy Artillery was captured by Confederate forces and held in a prison camp. 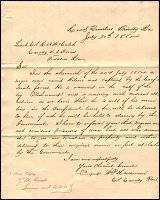 In responding to this letter, Brig. Gen. J.M. Brayman explained, "When the United States made negroes soldiers it assured towards them the same obligations as were due to any others who might wear its uniform and bear its flag." 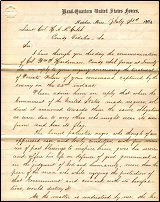