WASHINGTON, March 8, 2019 — Crafted from previously unseen 70mm film footage and more than 11,000 hours of uncatalogued audio recordings, a new documentary transports moviegoers to the heart of NASA’s most celebrated mission—Apollo 11, the one that first put men on the Moon and forever made Neil Armstrong and Buzz Aldrin into American icons. 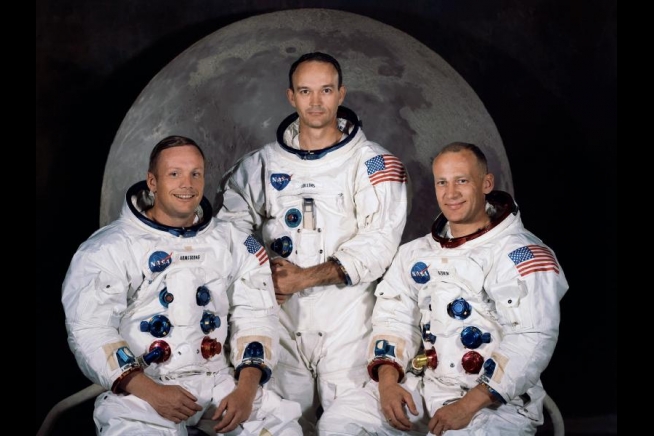 Newly digitized footage discovered at the National Archives and Records Administration plays a major role in the new documentary that allows viewers to experience the perspectives of the astronauts, the Mission Control team, and the millions of spectators on the ground. The film showcases the days and hours in 1969 when American astronauts took “a giant leap for mankind” into the future.

A digitization partnership agreement between the National Archives and a New York–based independent production company resulted in a film that has garnered enthusiastic praise nationwide and ensured the preservation and continued access of the records.

Archivist of the United States David S. Ferriero was a special guest at an advance IMAX screening of the film.

“Kudos to Dan Rooney and our team at the National Archives for locating, identifying, and sharing this astounding footage,” Ferriero said. “Their contributions to the Apollo 11 documentary underscore the importance of our mission. By preserving and making accessible these film reels, they have given the world an unprecedented and breathtaking glimpse of this historic milestone."

Ann Cummings, National Archives Research Services Director, explained that agency employees in the Motion Picture, Sound, and Video Branch and the Motion Picture Preservation Lab, as well as staff in various other offices across the agency, played a critical role in enabling the access and digitization of these previously unseen holdings.

“I am so proud of the many Research Services staff who were part of the incredible team that contributed to preserving, digitizing, and providing access to the holdings showcased in Apollo 11,” Cummings said. “The project truly was a team effort. I commend everyone who worked so hard to preserve and digitize these unique film holdings.”

“We had been working with the filmmakers and researchers for almost a full year before the formal partnership agreement was signed,” Rooney said. “National Archives staff had been assisting their research, and we agreed to several meetings to discuss their project, their goals, and their proposals to apply state-of-the-art motion picture scanning techniques to NASA archival materials.

“As our conversations evolved, we learned of their experience working with large format film materials. We also learned about their setup at the New York City post-production facility, where they had access to high quality scanners capable of handling nearly every gauge of film ever created, up to and including 70mm,” he said.

Rooney went on to explain that the group had put together meaningful proposals and had very well developed ideas.

“At that point, there was a collective light bulb that went off in everyone’s head that this project could be a major opportunity for us to preserve, digitize, and make available many of the 70mm film holdings, which exist in a variety of specialized formats. Many of these holdings have long been discussed, but have remained out of our reach in terms of cost and the technology to achieve meaningful reformatting. So, it really turned into a 70mm preservation and digitization project for the National Archives,” said Rooney.

Work is anticipated to continue on the project to preserve these 70mm film holdings of the National Archives throughout 2019.

The movie debuted exclusively in IMAX theaters on March 1, 2019, and will begin showing in theaters across the nation on March 8, 2019.