WASHINGTON, April 5, 2018 — The National Archives will open a special exhibit this week dedicated to former First Lady Elizabeth Anne “Betty” Ford. The exhibit will include rarely seen objects, documents, and photographs that highlight Betty Ford’s courage and candor when speaking publicly about her own personal battle with breast cancer. 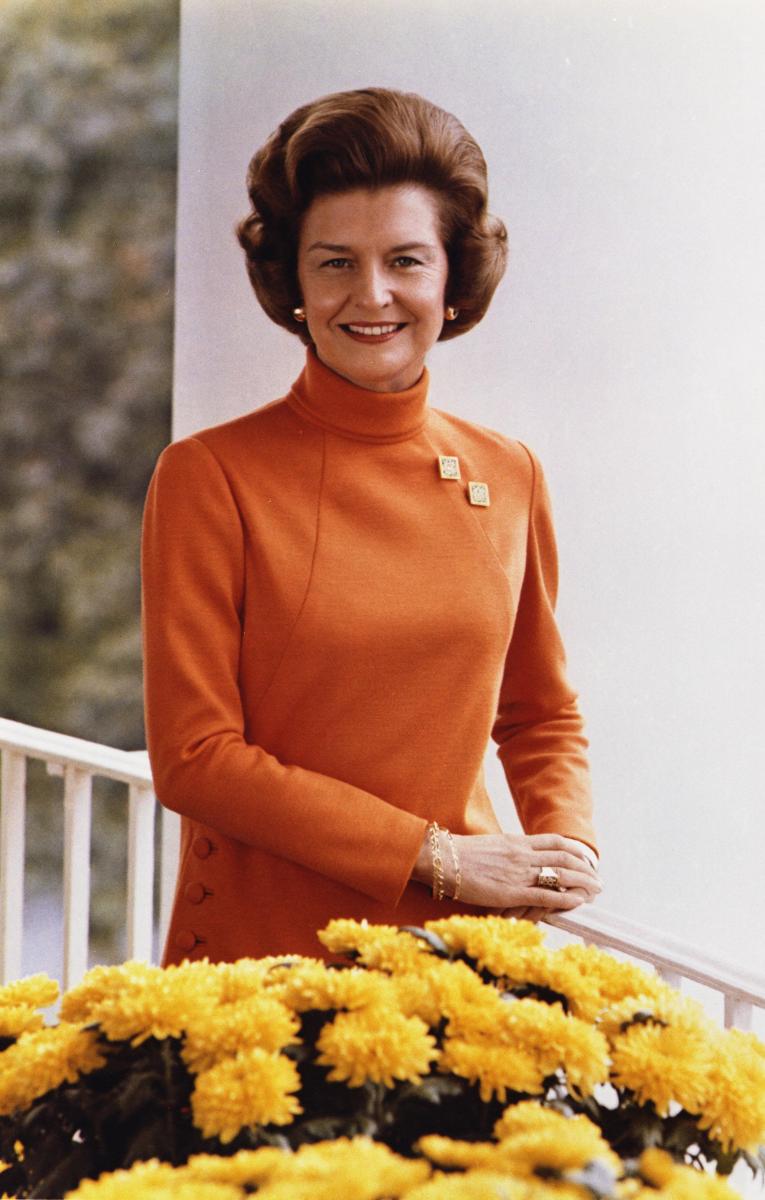 On display in the Public Vaults Gallery at the National Archives Museum, “Betty Ford: A Champion for Breast Cancer Awareness” celebrates the 100th anniversary of her birth, which was on April 8, 1918.

“Betty Ford’s success in using her position as First Lady as a platform to raise cancer awareness was a significant step in fostering an open discussion about such an important health matter for the American public,” said exhibits information specialist Corinne Porter, curator of the exhibit.

Just a little more than a month after she became the First Lady, Ford was diagnosed with breast cancer. On September 26, 1974, doctors discovered a lump in her breast during a routine medical examination. She underwent a mastectomy just two days later.

Ford purposefully raised public awareness of screening and treatment options while reassuring women already suffering from similar ordeals with the disease. At this time, women were not openly talking about breast cancer and First Ladies, in particular, hadn't previously been open about their personal health problems. Ford was credited by many for saving the lives of countless American women over the coming decades.

“Today cancer awareness and advocacy campaigns are important, but also common place in the public sphere, so it’s hard to appreciate just how radical it was for the First Lady to speak publicly about her cancer diagnosis and treatment at that time,” Porter said.

As record numbers of women began receiving breast examinations—many for the first time—the incidence of breast cancer diagnoses in the United States rose by 15 percent. In recognition of her advocacy efforts, Betty Ford received the American Cancer Society's “Communicator of Hope” Award in December 1976. The National Archives exhibit will include Ford’s speech cards with her handwritten edits from that event.

Exhibit visitors can view letters and cards from children and adults sharing words of encouragement and their own personal battles with cancer. Ford received more than 50,000 pieces of mail during her ordeal.

“The outpouring of public support for the First Lady was massive,” Porter explained. “What I love most about the correspondence is the impact that the First Lady’s efforts had on the lives of individual Americans.”

First Lady Betty Ford dances on the Cabinet Room table on the day before departing the White House upon the inauguration of President Jimmy Carter, January 19, 1977. (Photo courtesy of Gerald R. Ford Library)

Porter told of one particularly moving letter in the exhibit written by a Mrs. Stroud who felt encouraged to conduct a self-examination following the news of the First Lady’s cancer diagnosis and found a malignant lump in her own breast.

“Thanks to her early cancer detection the treatment was pretty minimal, but she tells Betty Ford that it could have been a very different story had she waited till her next check-up,” Porter said.

The display also includes a heartfelt letter written by Betty’s husband, President Gerald R. Ford, expressing his and their children’s love and support while she was undergoing treatment in the hospital.

A special collection of photographs of the First Lady are featured in the display as well as an award she received from the National Association of Practical Nurse Education and Service honoring her for “outstanding courage and for furthering public understanding regarding the importance of early detection and treatment as a means of combating cancer.”

The exhibition—part of the Betty Ford Centennial Celebration—opens at 10 am on April 6, 2018, at the National Archives Museum in Washington, DC, and continues through April 4, 2019. The display will be open daily from 10 am to 5:30pm.

In conjunction with the exhibit opening, the National Archives will host a screening of the 2009 PBS documentary that profiles Betty Ford, her time in the White House, her advocacy for equal rights, and the founding of the Betty Ford Center in California. The program, Betty Ford: The Real Deal, will be held April 6, 2018, at noon. Reservations are free and recommended.

The Ford Museum will offer free admission on April 8, 2018, from noon until 5 pm to celebrate Ford’s centennial. In addition, they will open a new exhibit, “In Step with Betty Ford: In Celebration of Her Centennial,” on April 10, 2018, through January 6, 2019.

Special events will include the sold out “First Ladies Luncheon—The Centennial Birthday of First Lady Betty Ford” on April 11, 2018, at noon, and a lecture, First Ladies and American Women: In Politics and at Home on April 26, 2018, at 7 pm. Additional programs are scheduled for September 2018 at the museum.

The celebration will continue on social media as well. On April 6, 2018, the National Archives will celebrate Betty Ford’s lifelong love of dancing with an Archives Hashtag Party on Twitter and Instagram. Cultural organizations will share their dance-related collections using the tag #ArchivesDanceParty. Over 560 galleries, libraries, archives, and museums have joined the National Archives to share their collections for #ArchivesHashtagParty. 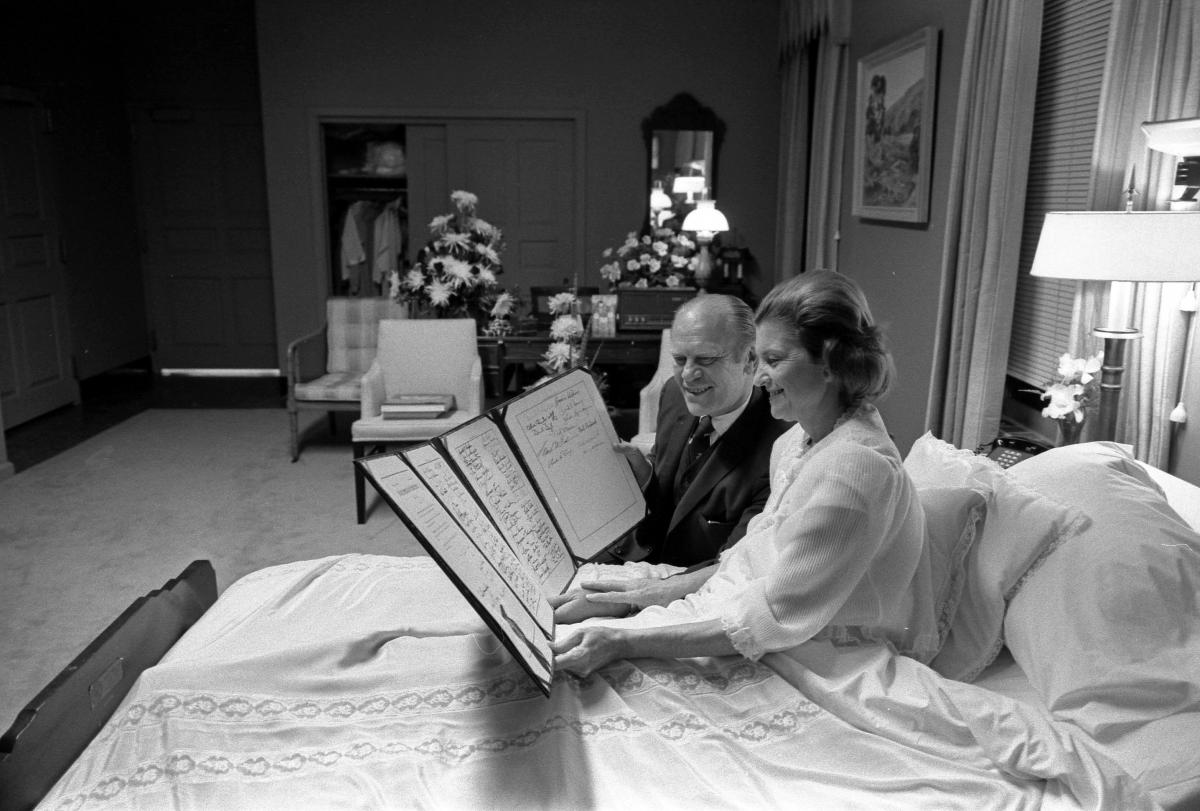 The 100th anniversary of the birth of First Lady Betty Ford is celebrated with special programming, including new exhibits and a video at the National Archives in Washington, DC, and the Gerald R. Ford Presidential Library and Museum in Grand Rapids, Michigan.

In 2018, the National Archives celebrates the 100th anniversary of the birth of Elizabeth Anne "Betty" Ford, see our special page for more information.