When the convoy arrived in San Francisco on September 6, 1919, the U.S. Army Motor Transport Corps had established a world’s record in long-distance heavy motor transport. The "truck train" was launched to test the challenges involved in moving an army across the continent under wartime conditions.

For one of the officers, a 28-year-old Army lieutenant colonel assigned as an observer for the War Department, the transcontinental trek made a life-long impression. Lt. Col. Dwight D. Eisenhower observed firsthand the difficulties of long-distance road travel, and these early experiences influenced his later decisions as President concerning the need for an interstate highway system.

The need for improvement was apparent to him, as he wrote in a November 1919 report to the Chief of the Motor Transport Corps.

“It seemed that there was a great deal of sentiment for the improving of highways, and, from the standpoint of promoting this sentiment, the trip was an undoubted success,” Eisenhower said. 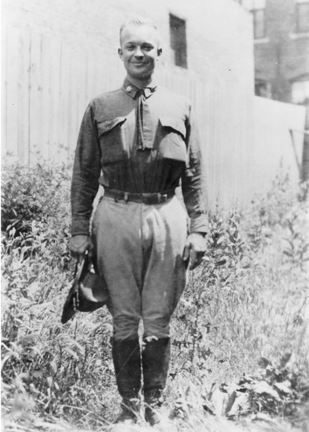 On this centennial of the Transcontinental Motor Convoy, the National Archives and the Dwight D. Eisenhower Library look back at the hardships and accomplishments of the coast-to-coast expedition.

Decades after completing the trek, Eisenhower wrote about the beginning of the trip, noting that, at the start, they, “were not sure it could be accomplished at all. Nothing of the sort had ever been attempted.” When they reached the Pacific coast, they had overcome adversities of terrain and weather and raised awareness of the state of the nation’s roads.

A section of the new exhibit space in the recently renovated Eisenhower Library in Abilene, KS, tells the story of the convoy, and a Prologue article describes the connection between Eisenhower’s experiences in 1919 and his later support for the interstate highway system.

Find GIFs of the motor convoy in a story on the National Archives Giphy channel or watch the full historic film footage on our YouTube channel.