WASHINGTON, December 17, 2018 — “What is the difference between a bookkeeper in New York City’s garment district and a Supreme Court Justice?” The Honorable Ruth Bader Ginsburg, Associate Justice of the Supreme Court of the United States, asked a group gathered for a naturalization ceremony in the National Archives Rotunda in Washington, DC. “One generation. My own life bears witness.” 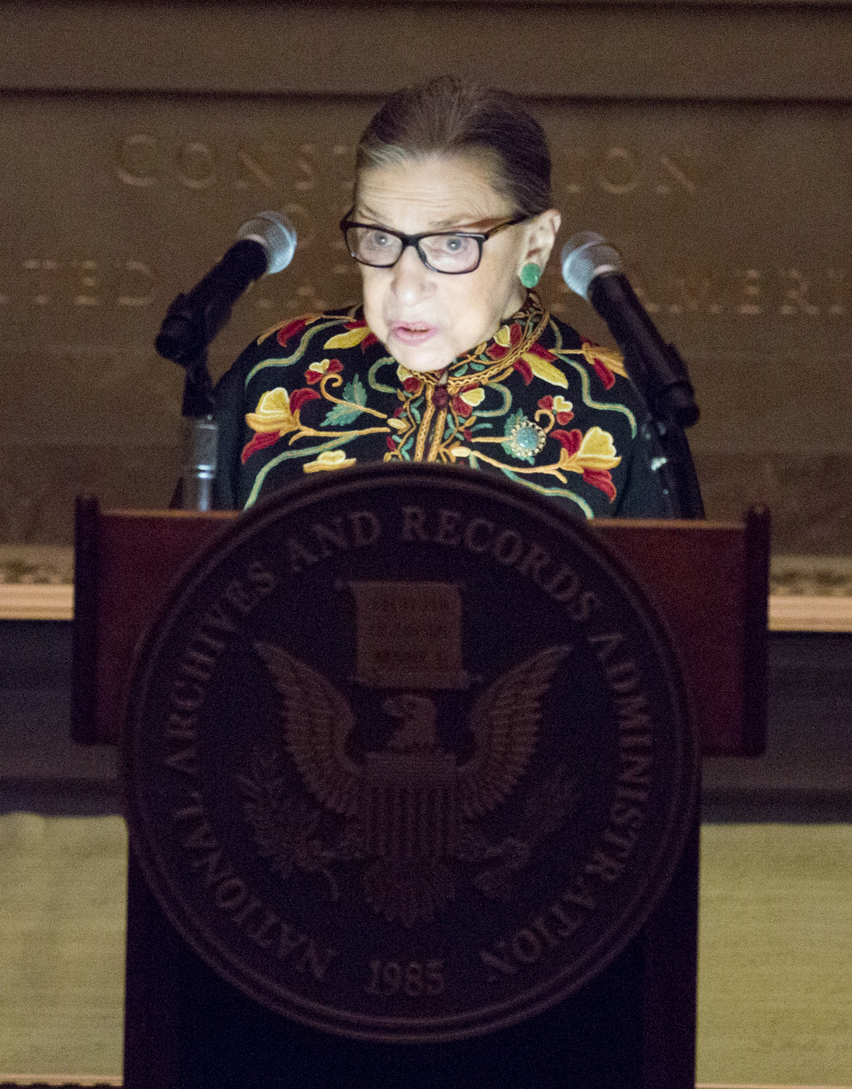 The Honorable Ruth Bader Ginsburg addressed 31 newly naturalized citizens at the National Archives in Washington, DC, on the 227th anniversary of the Bill of Rights, December 14, 2018. (National Archives photo by Kitty Kouwenhoven)

Ginsburg addressed 31 of America’s newest citizens, their family members, and guests. She received a standing ovation and cheering applause. Those new naturalized United States citizens had just taken the oath of allegiance on Bill of Rights Day, December 14, 2018—the 227th anniversary of the document.

Ginsburg welcomed the new Americans just steps away from the nation’s founding documents: the Declaration of Independence, the Constitution, and the Bill of Rights, collectively known as the Charters of Freedom.

“Today, you join more than 20 million current citizens born in other lands who chose, as you have, to make the United States of America their home,” Ginsburg said. “We are a nation made strong by people like you: People who traveled long distances, overcame great obstacles, and made tremendous sacrifices—all to provide a better life for themselves and their families.”

Ginsburg spoke of her own father, who arrived in the U.S. from Odessa, Russia, at the age of 14, speaking no English, and of her mother, born just four months after her parents arrived from Austria by ship at Ellis Island.

“As testament to our nation’s promise, the daughter and granddaughter of immigrants sits on the highest court in the land,” Ginsburg said. “In America, land of opportunity, that prospect is within the realm of the achievable.” 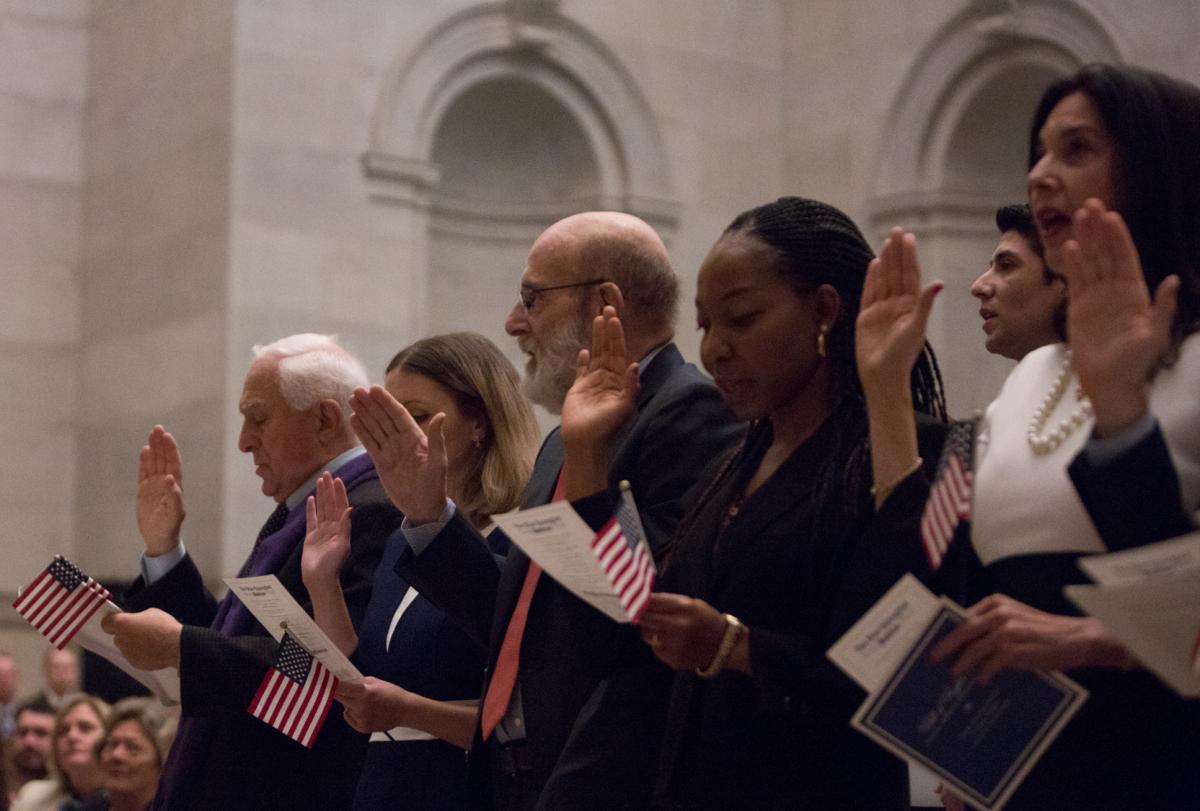 Thirty one new citizens take the oath of allegiance during a naturalization ceremony at the National Archives in Washington, DC, on December 14, 2018. (National Archives photo by Jeff Reed)

Archivist of the United States David S. Ferriero welcomed the new citizens and explained the historical significance of each of the documents in the Rotunda. He also shared with them his own family’s heritage of immigration and how he’d used records at the National Archives to trace his own heritage.

“Many Americans have stories like mine,” Ferriero said. “And now you, our newly naturalized citizens, will have your own journey to share.

“We have over 15 billion pages of records here at the National Archives,” he continued. “Becoming American citizens makes you part of the National Archives, too. Your naturalization records will be part of our holdings. And someday your descendants will search our records to discover your history.”

L. Francis Cissna, Director of U.S. Citizenship and Immigration Services (USCIS), lauded the group for their commitment on the long road to becoming naturalized citizens and urged them to become active in that citizenship.

“Upon taking the oath of allegiance, you have joined a nation of citizens, both naturalized and native-born, who are united by a belief in the rights that are described and guaranteed by the Declaration, the Constitution, and the Bill of Rights,” Cissna said. 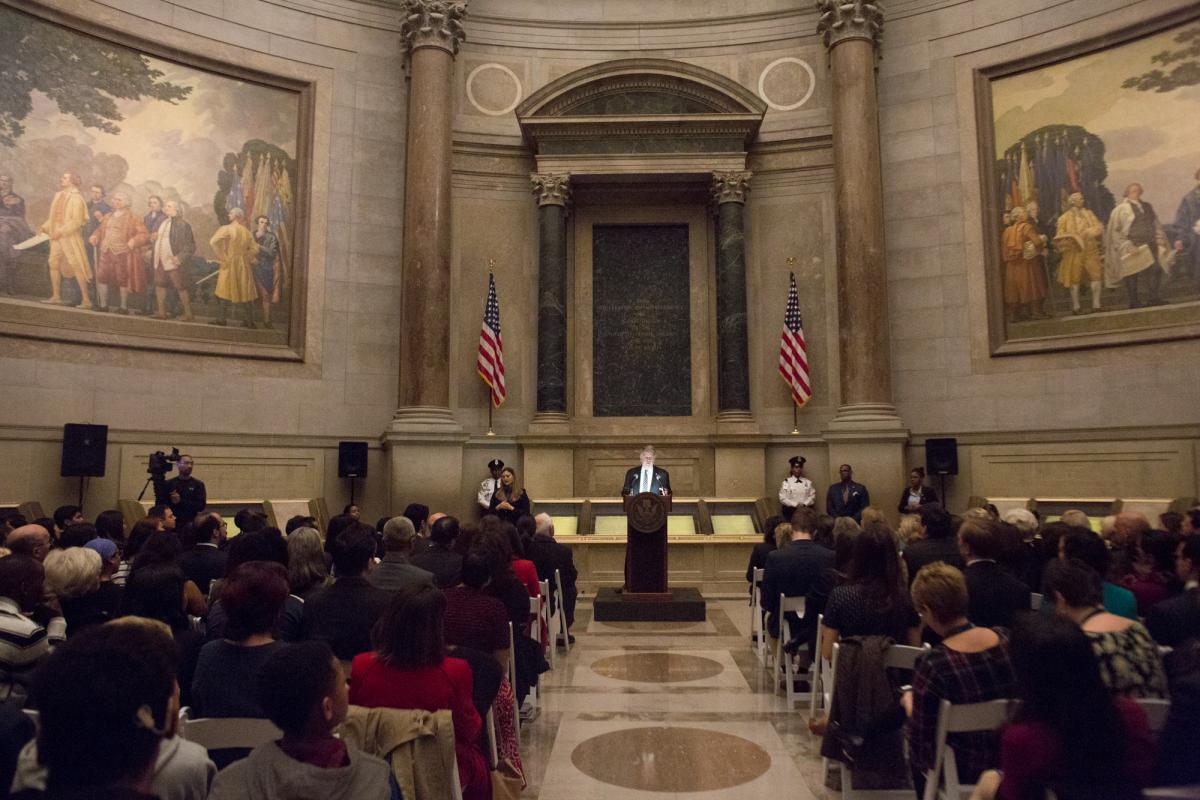 Archivist of the United States David S. Ferriero welcomes 31 new citizens and their guests during the naturalization ceremony held at the National Archives in Washington, DC, on December 14, 2018. (National Archives photo by Kitty Kouwenhoven)

“You now have a vested interest to ensure the well-being and success of your country,” Cissna added. “As you build your lives, I ask that you use your talents to give back to your community through civic participation, service, and active and committed citizenship.”

The Honorable Beryl A. Howell, Chief Judge, U.S. District Court for the District of Columbia, administered the oath of citizenship during the opening portion of the ceremony. Later, in her closing remarks, Howell praised the new Americans for their hard work and commitment to becoming Americans.

“People come to America for many different reasons,“ Howell said, “Some leave the countries of their birth because of war, or to escape difficult situations, but all who come here do aspire to build better lives for themselves and their children. America truly is the great melting pot. We are truly enriched and better for it.”

Ketan Gada, a native of India, was one of the 31 new citizens who took the oath.

“Just to be in this Rotunda, in the National Archives with all of the founding documents, that in and of itself is such an honor,” Gada said. “But then to have Ruth Bader Ginsburg come out and speak to us, it was such a privilege.”

He explained that he had been preparing and working toward American citizenship over the past 17 years, and he had recently studied the history of Bill of Rights and the other founding documents of the nation in preparation for the final step in becoming a U.S. citizen. 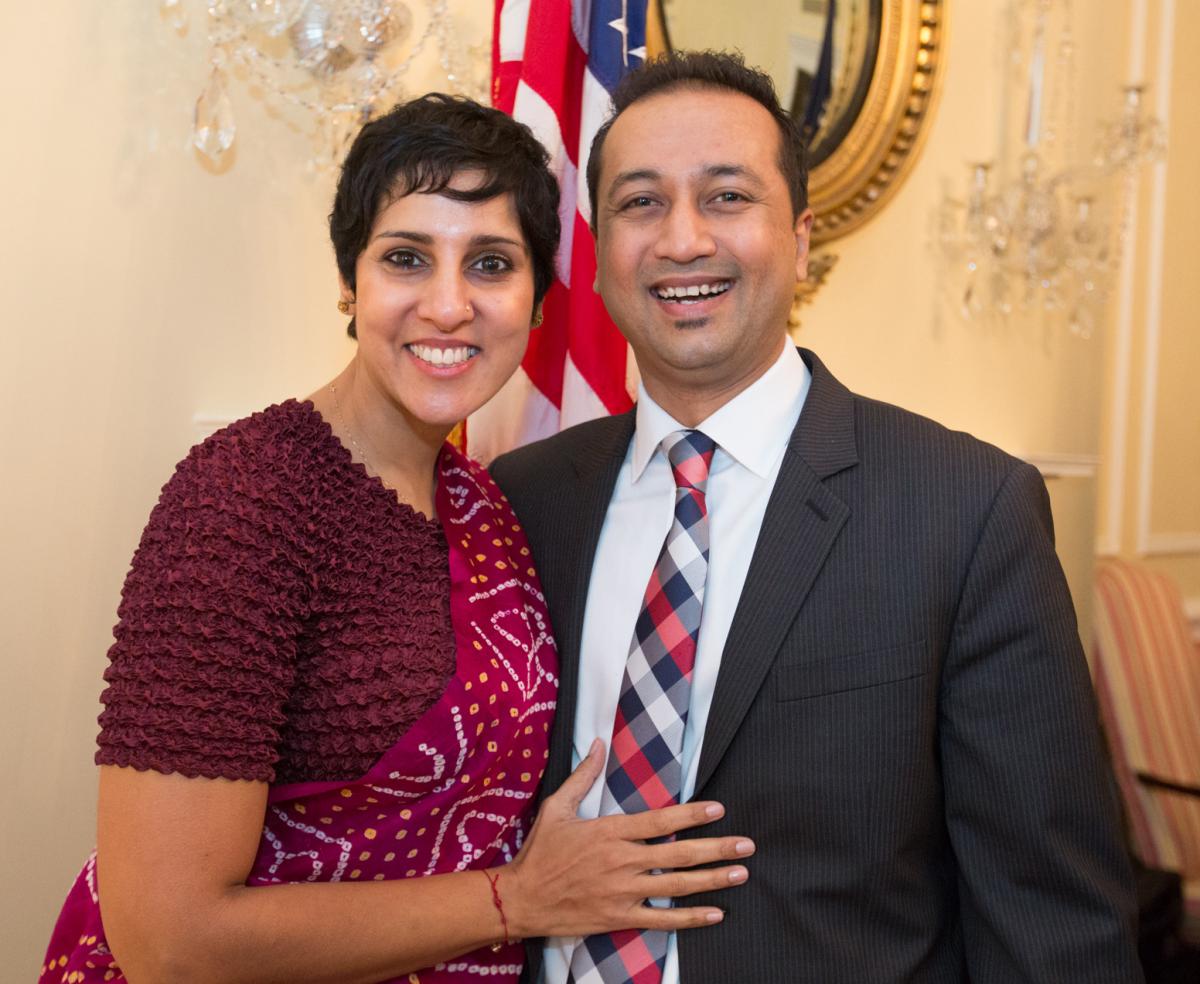 Ketan Gada (right), a native of India, celebrates with his wife. Gada was one of the 31 new citizens sworn in at the Naturalization Ceremony at the National Archives in Washington, DC, on December 14, 2018. (National Archives photo by Jeff Reed)

“Near the end of this journey, I had to go through all the U.S. history again,” Gada said. “So that was really fresh in my mind. It was such an honor and privilege to officially become a citizen in this building near those records on this very special day. It was all amazing!”

The ceremony also include students from Hardy Middle School in Washington, DC, who recited the Preamble to the U.S. Constitution

This year marks the 227th anniversary of the ratification of the Bill of Rights. Bill of Rights Day commemorates the ratification of the first 10 amendments to the U.S. Constitution on December 15, 1791. In President Franklin D. Roosevelt’s 1941 proclamation, he asked that December 15 be “set apart as a day of mobilization for freedom and for human rights, a day of remembrance of the democratic and peaceful action by which these rights were gained, a day of reassessment of their present meaning and their living worth.”

For 227 years, this landmark document has guaranteed our freedoms of religion, speech, the press, assembly, and the right to petition the Government for redress of grievances.