WASHINGTON, August 23, 2018 — The National Archives’ strategic plan is a major step toward 21st-century records management, the Deputy Archivist of the United States said last week during a major conference of archival professionals.

Debra Steidel Wall joined other senior leaders from the National Archives and Records Administration (NARA) to detail the agency’s digital goals during an August 17 panel discussion at the joint annual meeting of the Society of American Archivists, the Council of State Archivists, and the National Association of Government Archives and Records Administrators held August 12–18 in Washington, DC. 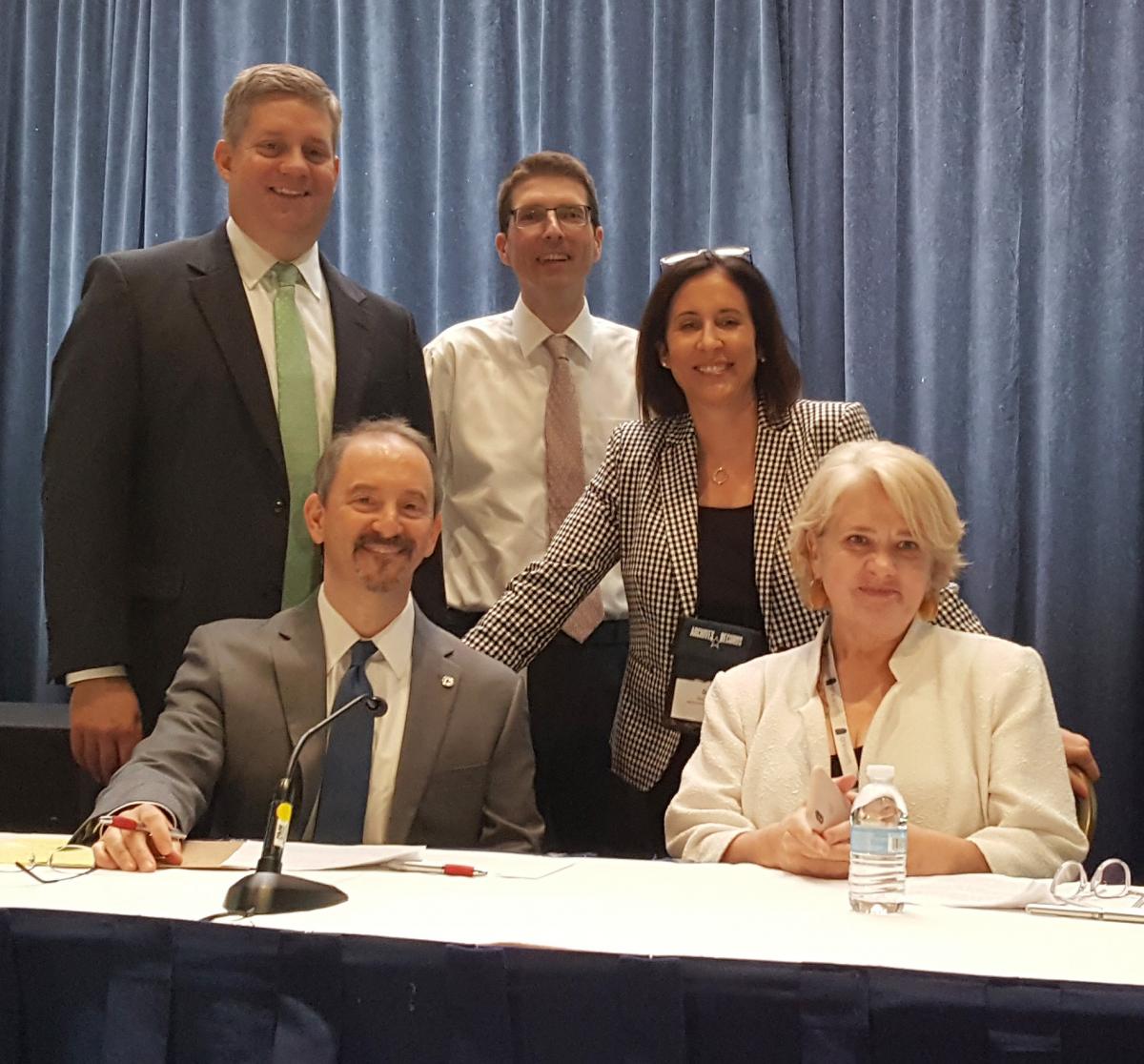 Wall shared the agency’s four strategic goals: make access happen, connect with customers, maximize NARA’s value to the nation, and build our future through our people.

“One particularly bold initiative . . . we’ve set is that we will no longer take records in paper form after December 31, 2022,” Wall said. “Although that goal sounds dramatic and is going to be a major milestone for us, it’s really part of a long evolution at the National Archives. We started our first electronic records program 50 years ago, and we’ve been taking a series of steps over the last decade or more to help Federal agencies transition to fully electronic recordkeeping.”

With additional goals of advancing electronic recordkeeping for all government agencies and digitizing 500 million pages of the collection, Wall called the strategic plan a major step toward modernizing records management.

“We think our strategic plan respects our traditions as archivists and our responsibilities,” she said. “[It] also helps the Federal Government take its modern recordkeeping responsibilities very seriously for the benefit of government transparency, not just for today, but for well into the future.”

Bosanko outlined how the National Archives’ strategic goals are influencing government reform as a whole.

“When we first put the draft out, and even when we finalized it, a lot of agencies absolutely viewed the goal as ‘our’ strategic plan,” Bosanko said. “This perspective changed with the release of the government reform plan [by the administration], and that goal is now the mission imperative to be able to transition to a fully electronic government. Suddenly there was a bit of a shift for agencies that realized it wasn’t just NARA putting a marker out there, but rather something bigger.”

Bosanko also addressed how the National Archives plans to bring the electronic records management workforce into the 21st century by creating career development programs to support the transition to electronic records within the agency as well as throughout the entire Federal Government.

“In the spirit of transparency, we are also committed to shar[ing] what we have learned beyond the National Archives,” he said. “This is us driving change throughout the executive branch and beyond.”

“This is very much about creating a modern archives, but it’s also about the Archives doing its part to create a modern and responsive government,” Cheatham said. He added that this new approach will improve the Federal Government’s responsiveness to citizens while reducing costs.

Brewer shared how NARA is proactively providing guidance now on how Federal agencies can best meet the new electronic records management (ERM) requirements of the future.

“Our objective is help agencies make the transition to modernizing electronic recordkeeping across the government,” Brewer said. “Traditionally we’ve been very good at telling agencies what to do—we have regulations; we have NARA bulletins; we have FAQs. It’s been a focus of our office to develop products that are more practical, that will allow agencies to do implementation better.”

Brewer shared that the agency recently held its first “industry day” to share best practices with other Federal agencies as well as plans to continue training and preparative measures.

“Becoming a digital archives is simply keeping up with public expectations for digital transparency,” Wright said. “It’s not a luxury to have a digital presence anymore. In this century, who we are digitally is our identity to the world.”

“Getting the descriptions into a centralized access catalog was an important first step toward transparency,” Wright added. “At least people can find out what we have available even if they can’t immediately see it online. NARA currently has over 50 million digital copies available in the catalog. But when you put it in the context of the 12 billion textual records that we have in the Archives, it’s just the tip of the iceberg.”

Wright explained the agency’s strategy to develop multiple pathways for digitization, such as use of digitization labs, working with partners, and crowdsourcing.

“One of the most exciting developments to me is that we are asking agencies not only to provide their records in digital form so that we don’t keep adding to the massive amount of paper records to be digitized, but that we’re also asking for catalog-ready metadata . . . so our archival staff can spend more time working on deeper archival issues,” Wright said. “The more we can automate the process of receiving records from agencies and provide access to those records to the public, the more efficiently we can meet our users’ ever-rising expectations.”

The panel discussion was just one session during the conference. Twenty-four National Archives employees shared their archival expertise in 15 sessions at the event. In addition, the director of a Presidential Library administered by the National Archives—Meredith Evans—assumed the top leadership position in SAA for 2018 through 2019.