The holdings help tell the tragic history of the British ship Titanic, which sank on its maiden voyage in the Atlantic Ocean after colliding with an iceberg off the coast of Newfoundland. More than 1,500 of the approximately 2,223 passengers perished that fateful night on April 15, 1912.

The National Archives holds many Titanic-related items, including Senate investigation records, documents pertaining to the ship’s passengers for limited liability suits, and congressional resolutions. Many of these records tell the story of the survivors from their accounts that were transcribed in court documents. “

Loans of such artifacts offer the public a window on history that is unique and helps gain a better understanding of the actual events,” said National Archives senior registrar James Zeender.

Examples include claims filed in Federal court by many survivors and the testimony of Joseph Bruce Ismay, an English businessman who served as chairman and managing director of the White Star Line, which owned the Titanic. Ismay accompanied the ship on its maiden voyage and served as the highest-ranking White Star official to survive its sinking. Controversy surrounded Ismay and his role in the Titanic's history. A transcript of Ismay's testimony is among the records of U.S. District Courts.

Zeender explained that, although dated April 6, 1914, Ismay’s testimony transports readers back to the moments before the Titanic struck the iceberg on April 15, 1912. When Ismay was asked if there was any wind that night, the transcripts say that he responded, "I really do not remember. I only remember it as being a very beautiful fine night." The National Archives online catalog offers Ismay’s full transcript.

Zeender also noted that the exhibit helps visitors gain a greater appreciation of the passengers aboard the ill-fated ship. Comparing the loss claims of a surviving wealthy first-class passenger on the upper deck to a poor one far below in steerage allows for valuable insight into the era’s social classes, the lives of the individual passengers on board the ship, and the impact of loss they sustained when the ship sunk with their belongings, he said. Claims from both are found in the National Archives holdings and are included in the exhibit.

“These records add a more human connection to such a tragic accident,” Zeender added.

The curatorial staff at the Reagan Library designed, developed, found, and sourced the objects, wrote the catalog, and created the custom cases and effects of the original exhibition—“Titanic at the Reagan Library.” The exhibit ran from May 27, 2017, to January 7, 2018. Partner facilities, including three other Presidential Libraries and the National Archives at New York, which holds an extensive collection of Titanic-related materials, played key roles in supplying material as well.

The exhibit combined authentic artifacts to tell the stories of the people who were aboard the ship. It reunited hundreds of Titanic articles—many of which have not been together since the ship’s cataclysmic night in 1912—with material and artifacts related to the 1985 discovery of the shipwreck. Items from the 1997 blockbuster movie Titanic are also included in the exhibit and help examine the ship’s role as an icon in popular culture, as well as helping to reveal additional details to tell the story of the tragedy.

Artifacts include a deck chair from the ship—one of only eight known to exist—and documents in the form of claims from survivors, including the well-known Margarette Brown, also known as “The Unsinkable Molly Brown,” alongside movie set props and costumes from the various films that have been made about the tragedy.

Reagan Library supervisory curator Randle Swan explained the connection of the Titanic tragedy to the Reagan Library, noting that explorers located the shipwreck in 1985, during the Reagan Presidency, as part of a U.S. Navy sponsored secret and classified mission to map and survey the wreck site of a previously lost U.S. nuclear submarine.

Swan said the wreckage quickly became a often visited dive site for many different companies and explorers trying to capitalize on this piece of history. To protect the site from salvagers and preserve it for generations, President Reagan issued the 1986 RMS Titanic Memorial Act to designate the wreck as an international maritime memorial.

Swan said the success of the original exhibit prompted the library to share it with an even wider audience through the National Geographic Society.

“The original exhibit at the library was the most popular exhibition in library history with approximately 400,000 visiting it,” he said. He added that “the exhibit set attendance records for single day attendance and for weekly attendance.”

For the exhibit, the Reagan Library partnered with Dr. Robert Ballard, John Lehman, Nils Ronald Thunman, the United States Navy, and the Woods Hole Oceanographic Institute; James Cameron and his production company, Lightstorm Entertainment; FOX Entertainment; Cedar Bay Entertainment; and other public and private collectors of historic Titanic material from all over the world. The Ronald Reagan Presidential Foundation and Institute provided financial support for the original exhibit. 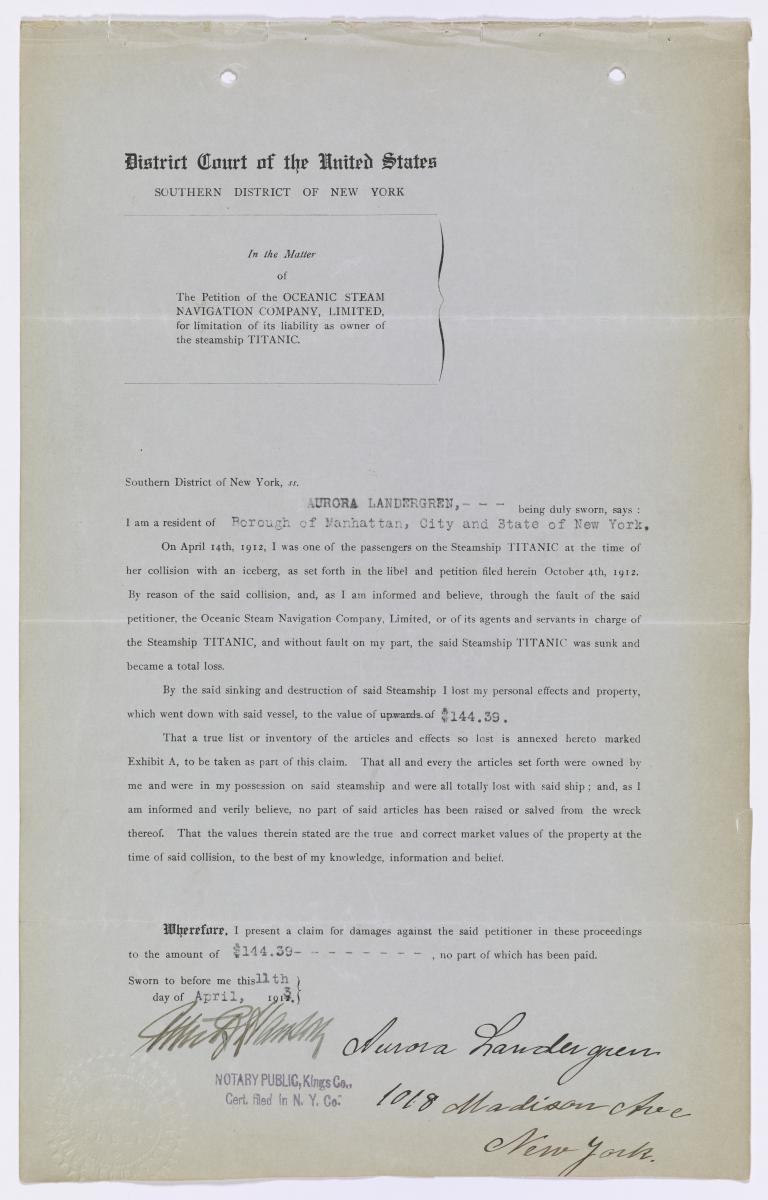 A claim filed in U.S. District Court by a passenger assigned to a lower berth aboard the sunken ship Titanic. Comparison of the claims highlights the differences between the classes or status of its passengers. 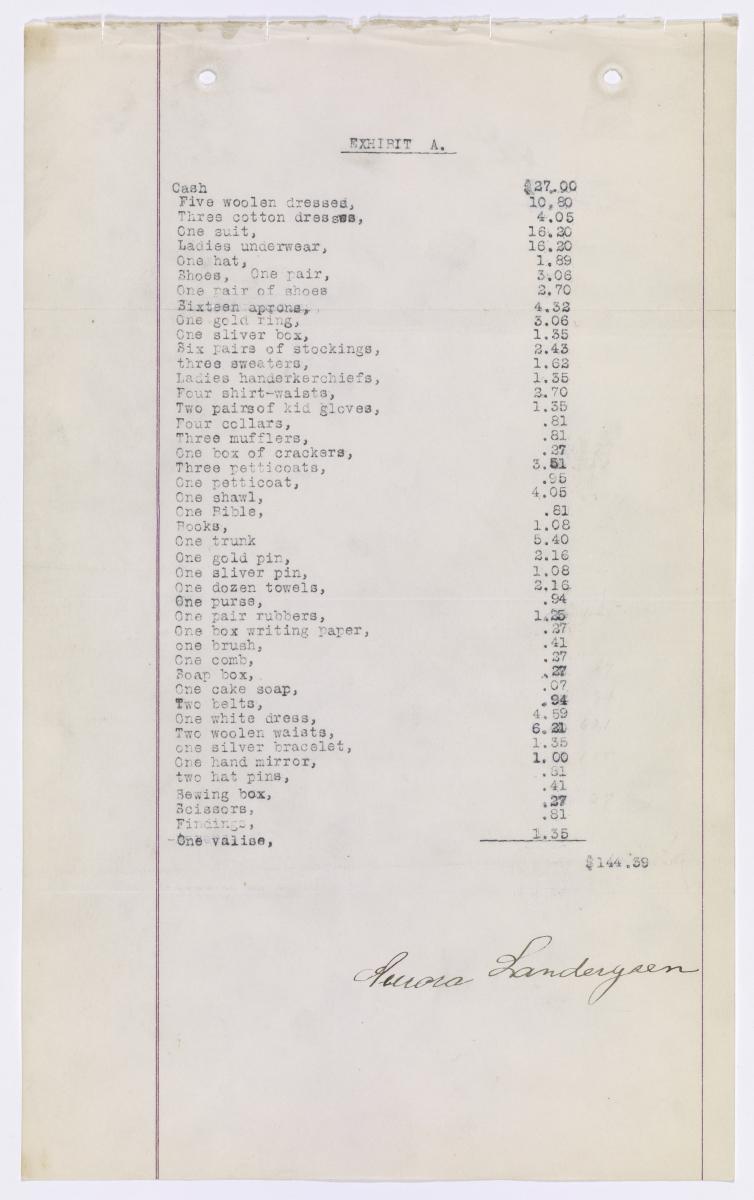 The U.S. District Court claim filed by Aurora Landergren, a passenger on the ill-fated Titanic from a lower berth, lists her possessions lost when the ship sunk. 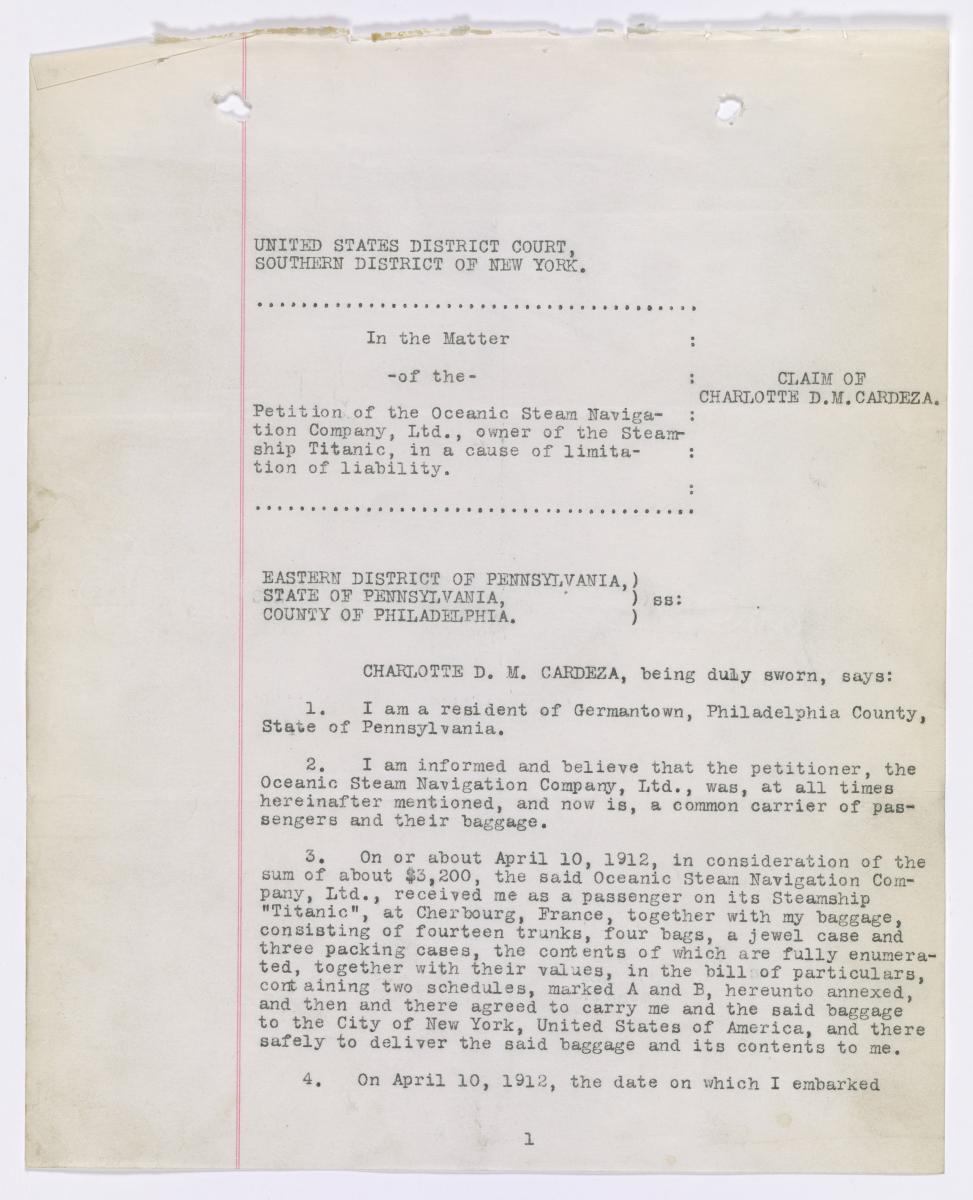 A claim filed in U.S. District Court by a passenger assigned to an upper berth aboard the sunken ship Titanic. Comparison of the claims highlights the differences between the classes or status of its passengers. 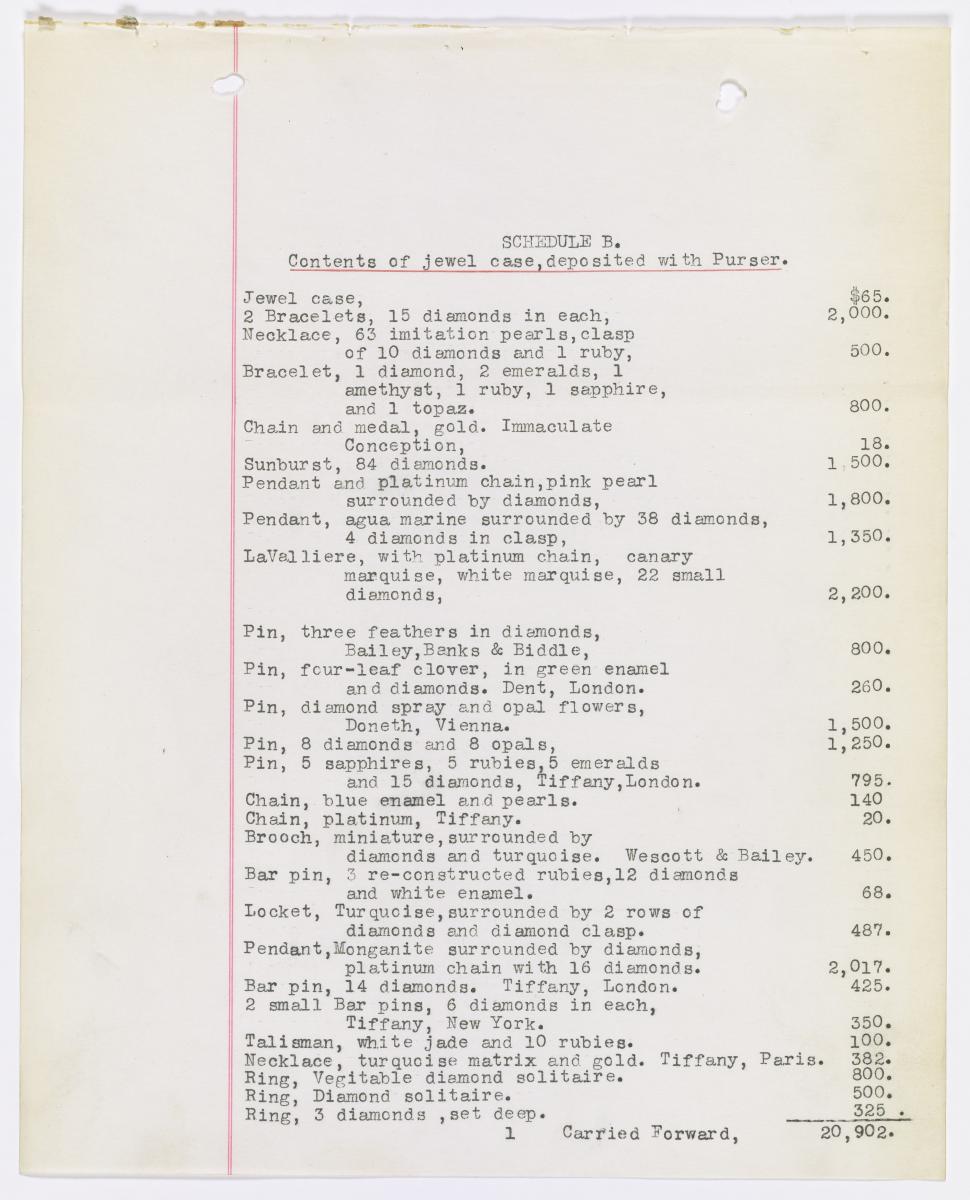 The U.S. District Court claim filed by Charlotte Cardeza, a passenger on the ill-fated Titanic from an upper berth, lists her possessions lost when the ship sunk.