WASHINGTON, December 5, 2019 – It’s a timeless question: are we alone in the universe? The United States Air Force sought to answer that question through the scientific analysis of 12,618 reports of unidentified flying objects (UFOs) investigated under three successive projects headquartered at Wright-Patterson Air Force Base in Dayton, OH. These included Project Sign, beginning in December 1947 and ending in February 1949; Project Grudge, a scaled-down continuation of Sign that ended in August 1949; and Project Blue Book, from March 1952 to December 1969—the longest-running iteration of the Air Force’s investigation of UFO sightings. 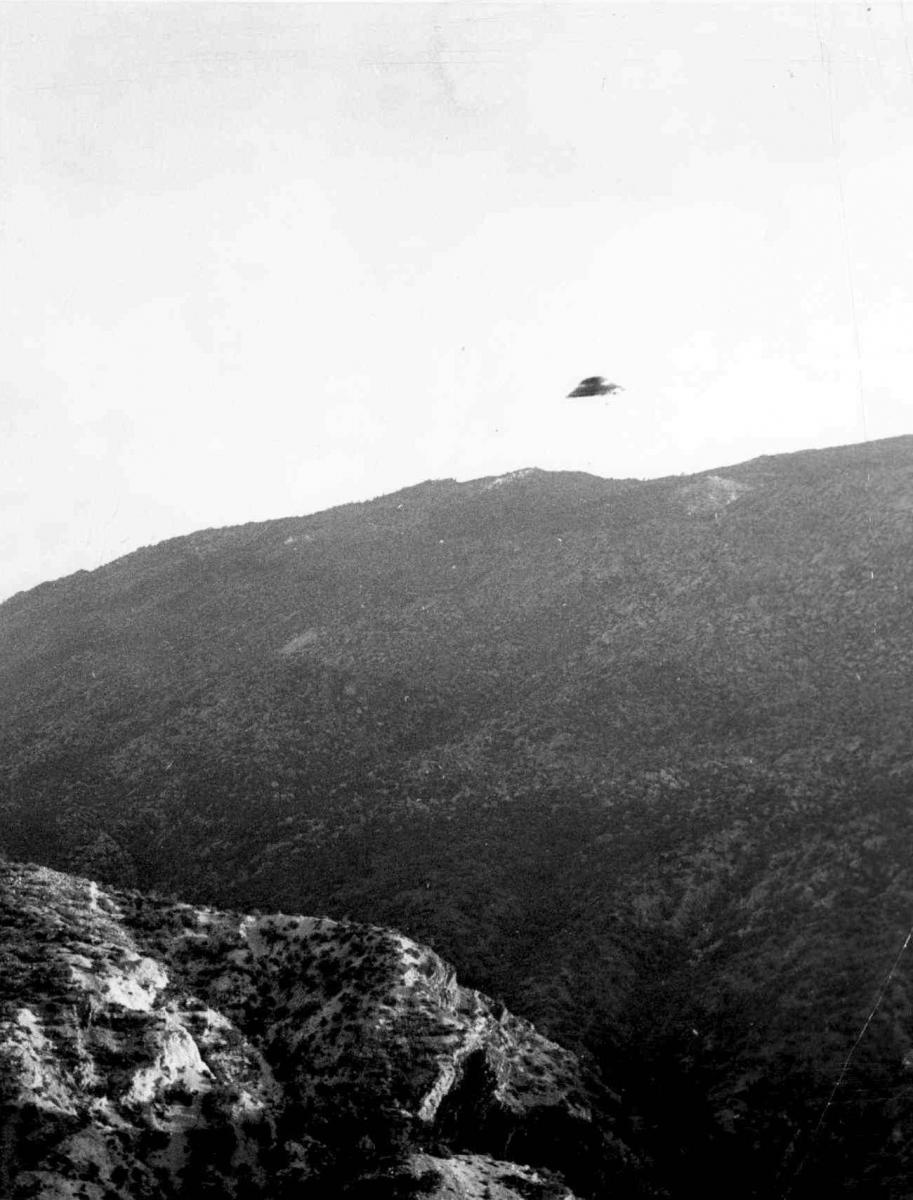 This photo, from the featured document display, is from a report of a UFO sighting in Riverside, California on November 23, 1951. (National Archives, Records of Headquarters U.S. Air Force [Air Staff])

The seminal event that launched modern “UFO hysteria” in the United States occurred on June 24, 1947, in the skies over Washington State. While searching for a downed United States Marine Corps transport plane thought to have crashed on the southwest side of Mount Rainier, private pilot Kenneth Arnold reported that he had observed nine UFOs flying at approximately 1,700 miles per hour. During a subsequent interview with members of the media, Arnold described the objects as “appearing like saucers skipping on water.” News reports shortened the term to "flying saucers," which then became a popular term for UFOs.

The flood of UFO reports in the months following Arnold’s reported sighting caused the Air Force Chief of Staff to order the establishment of a project “to collect, collate, evaluate, and distribute within the government all information concerning sightings which could be construed as of concern to national security” on December 30, 1947. This project, codenamed Sign, evaluated 243 reported UFO sightings. However, the results were inconclusive, as stated in the February 1949 report: “No definite and conclusive evidence is yet available that would prove or disprove the existence of these unidentified objects as real aircraft of unknown and unconventional configuration.”

According to the Air Force, Project Blue Book ultimately concluded that:

The Air Force retired its records concerning investigations of UFOs and transferred them into the custody of the National Archives in 1975. However, as archivist Joseph Gillette explained in a three-part series of Pieces of History blog posts concerning Project Blue Book, in taking custody of the investigation files from the Air Force, the National Archives also inherited responsibility for protecting personally identifiable information contained therein.

After an extensive interagency partnership between the two entities to redact personally identifiable information from Blue Book case files concluded in the spring of 1976, the collection was made available for public research.

The files held by the National Archives contain the information the Air Force gathered about specific UFO sightings. Each case file relates to one sighting or to a group of closely related sightings. The files contain reports from UFO observers, correspondence between these observers and the Air Force, newspaper and magazine clippings, and reports of analysis of photographs and physical evidence. 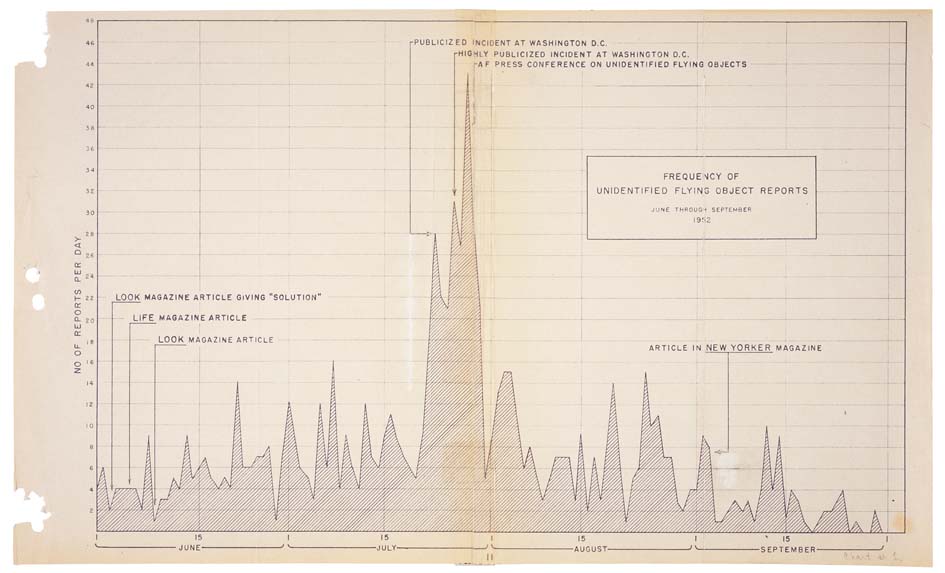 The display at the National Archives Museum includes this chart, Appendix I to Project Blue Book Status Report No. 8, which shows the frequency of unidentified flying object (UFO) reports in June, July, August, and September 1952. (National Archives Identifier 595542) 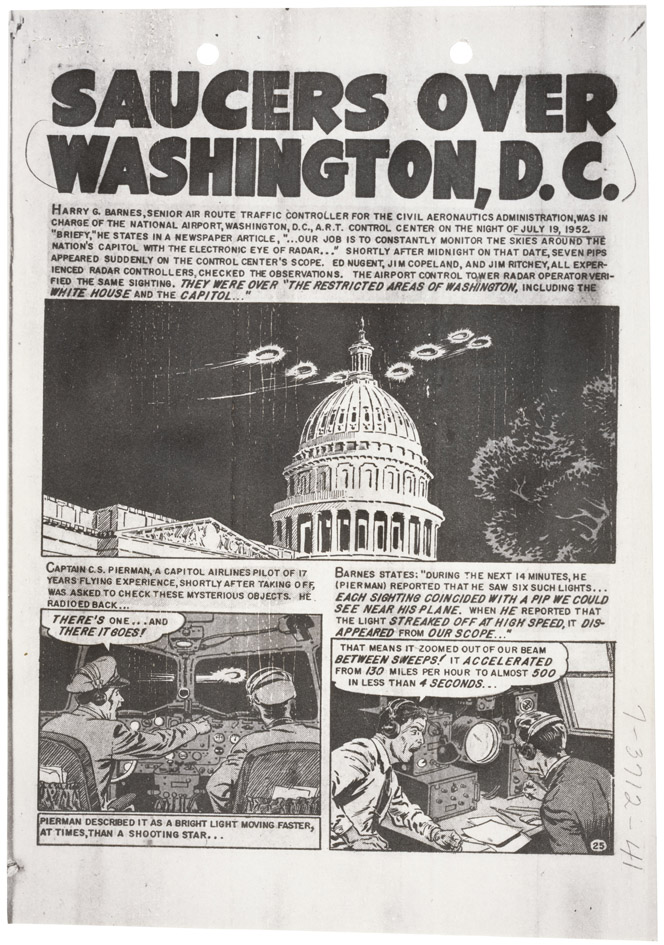 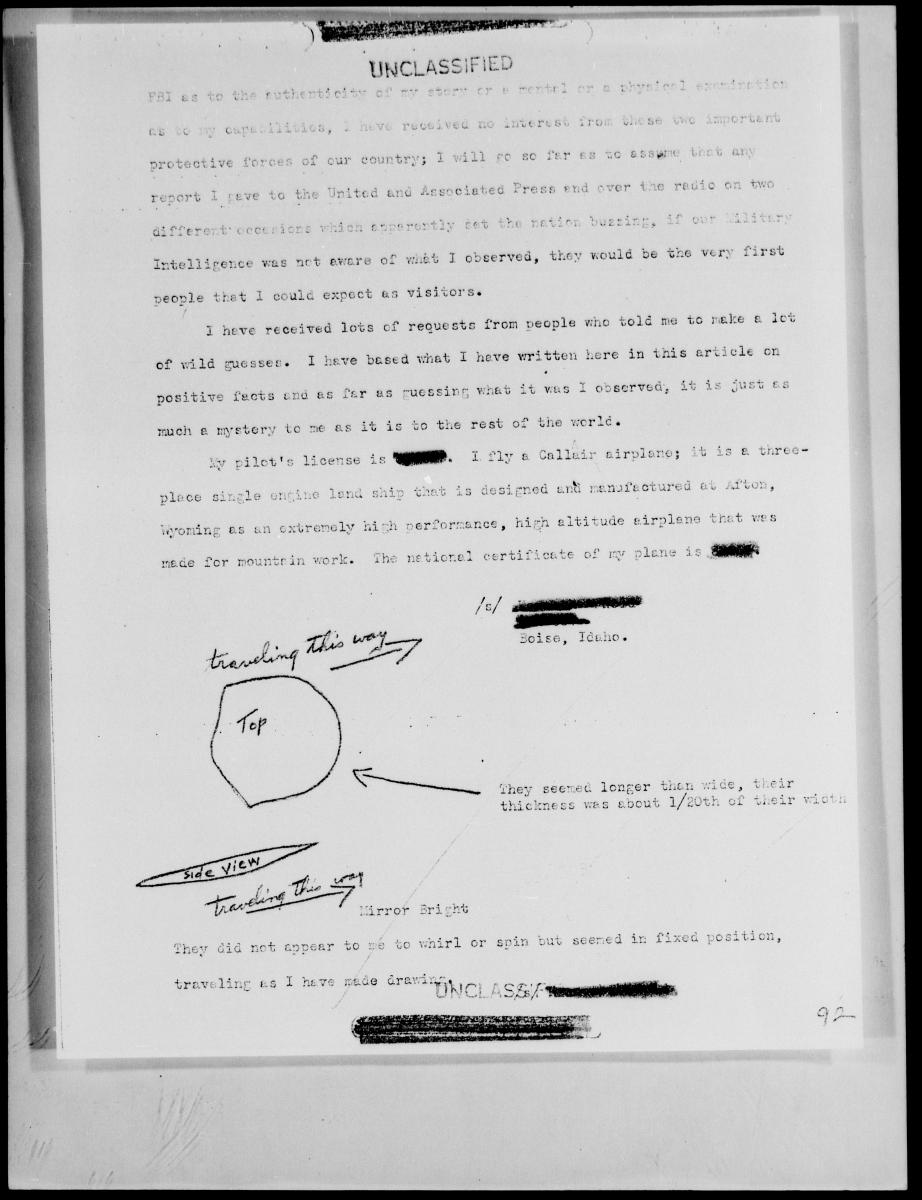 A page from the June 24, 1947 UFO sighting reported by Kenneth Arnold to the Air Force. (National Archives Identifier 28929152)