WASHINGTON, April 18, 2019 — For just a couple of hours last evening after closing to the public, the National Archives Museum in Washington, DC, was the scene of a couple dozen clue-gathering, mystery-solving, puzzle-decoding adult sleuths. 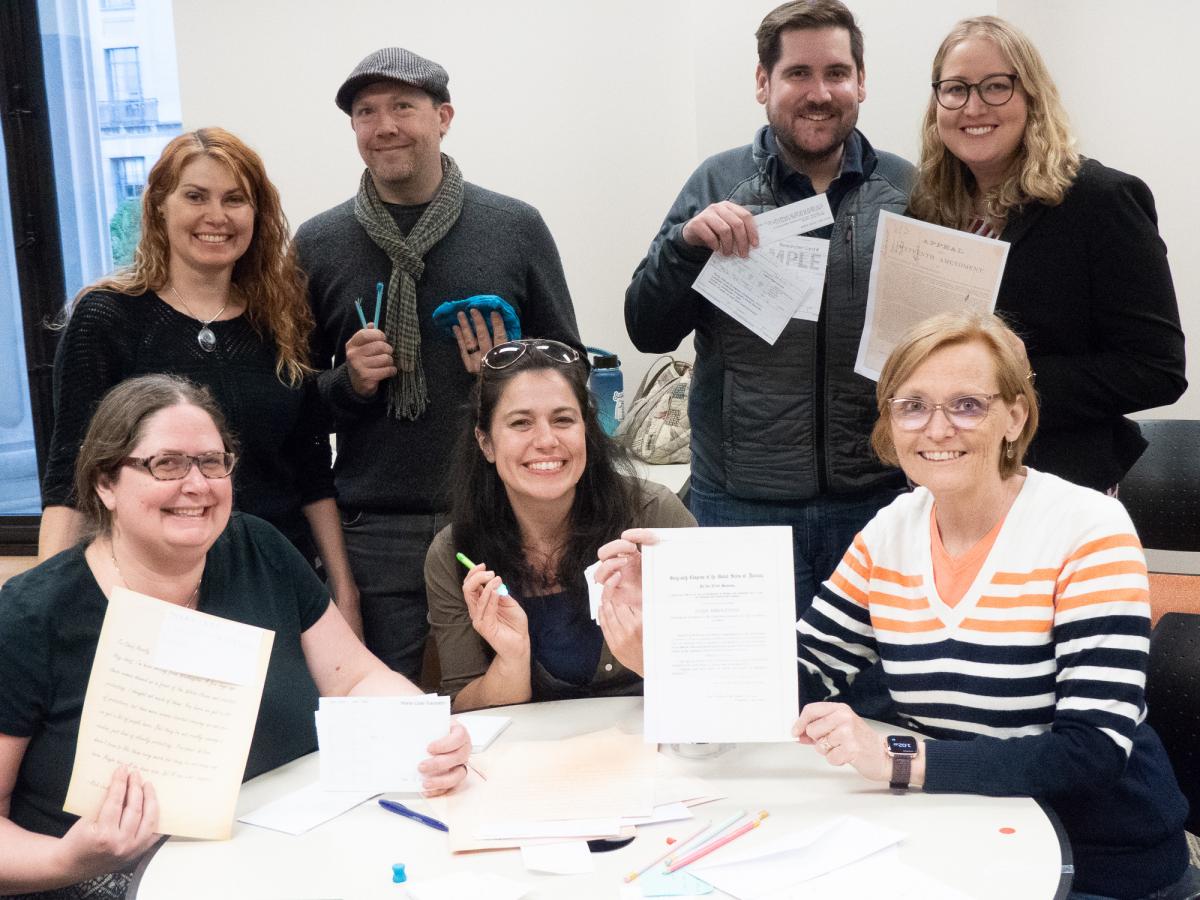 Dubbed an “Escape Room Hands-On Workshop,” the educational event gathered 26 participants in the Boeing Learning Center for a briefing on the games and puzzles they would be attempting to solve.They then broke off into teams of six or seven and set off to one of four rooms to learn about their “missions.” The teams had approximately 45 minutes to solve each puzzle, rotating through two rooms over the course of the two-hour event.

“To commemorate the upcoming 100th anniversary of the 19th Amendment,” Kraft said, “students from Montgomery College's Gaming and Simulation Program have designed and created this series of ‘escape room-inspired’ hands-on games that explore voting rights.”

The college students created four different puzzles or games using National Archives documents they found in the online catalog or on DocsTeach as their foundation, each connecting to voting rights in some way. For example, one game had participants solving a mystery involving ballots stolen from women exercising their right to vote. Another had teams searching for pieces of a missing document related to the 19th Amendment. Yet another focused on the Greensboro Four incident at a lunch counter in Greensboro, NC. 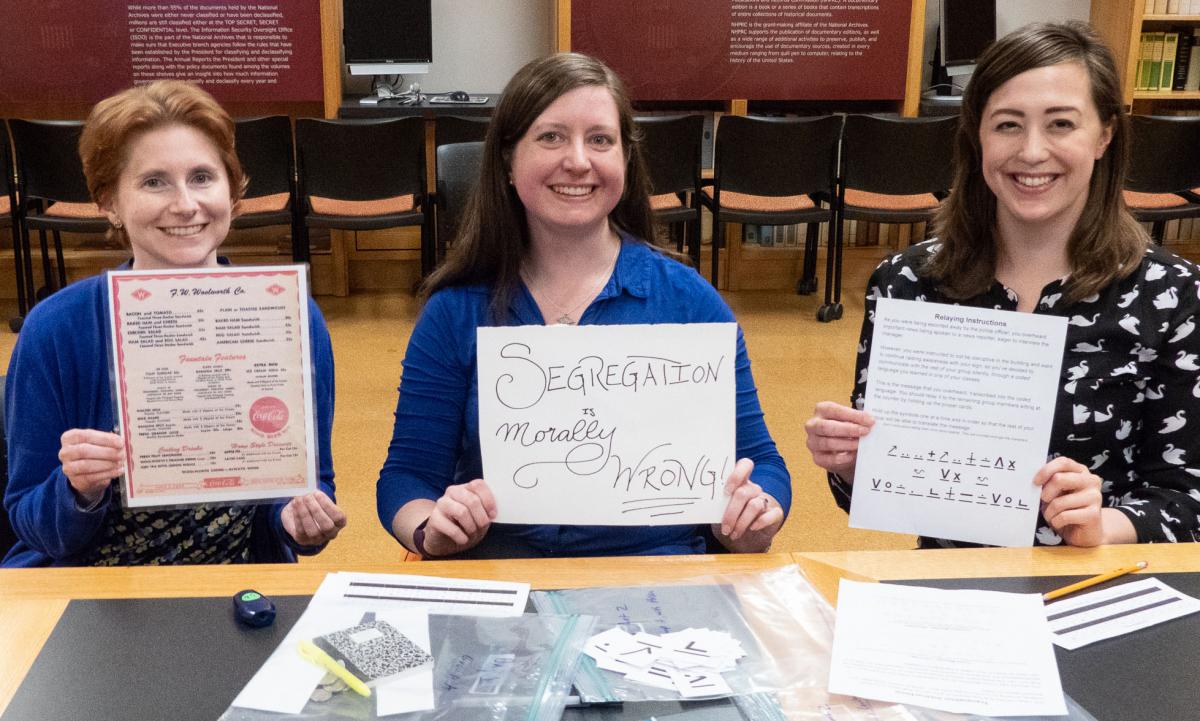 Montgomery College student Alex Eggleton portrayed a lawyer involved in the fight for the 19th Amendment for one of the games. Eggleton explained that he was able to apply what he has learned about game creation through his involvement in the project, but also “felt so much more informed about the fight for the 19th Amendment through this experience.”

“Just reading about some of the situations of the women going through the suffrage movement,” Eggleton said, “their experiences were really intense, so it felt right to pursue that gripping imagery and this piece of history for our game.”

As participants gathered in each of the four rooms, the students immersed the participants in their game experience by reenacting key scenarios, sharing prerecorded videos and “sets,” offering clues, and monitoring game play. The participants joined together, interacting and sharing ideas in order to solve each puzzle.

Sarina Katz, a participant and “alumni” of the National Archives escape room workshops, said she came back for this event after enjoying the first one a few years ago and wanting to bring friends along to share the experience this time. 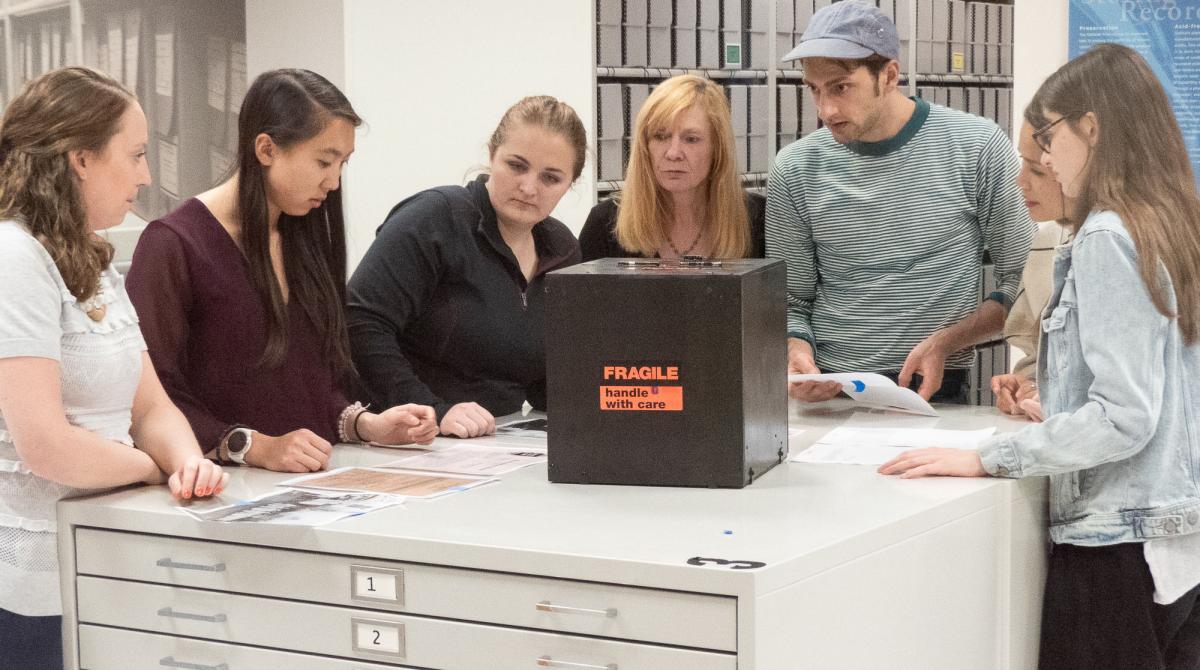 A team at the recent "escape room inspired" educational event at the National Archives studies clues to solve the mystery they have been asked to solve. (National Archives photo by Amber Kraft)

One of the goals of the education team is to introduce visitors to the many kinds of records held at the National Archives, Kraft said.

“The hands-on adult workshop series uses new and unusual ways to share more about the work of the agency,” Kraft said. “Many of our participants are first-timers to the museum, so it’s a fantastic way to show them all that the Archives has to offer.”

“The Archives' puzzle programs successfully connect students and adults to the museum’s exhibits and material culture, fostering lively conversation,” she added. “Fun, hands-on events have been a tremendous success with our participants over the past few years. We were excited to be able to offer a new ‘escape room–like experience’ to connect with our exciting new Rightfully Hers exhibit.”

The ‘escape room–inspired’ workshop is just one of the many education and public programs the National Archives’ will present in celebration of the centennial of the 19th Amendment. A new exhibit, Rightfully Hers: American Women and the Vote, will be the cornerstone of the agency’s centennial celebration of the historic amendment, which extended the right to vote to women. It opens on May 10, 2019, at the museum.

The escape rooms and puzzle programs started in 2016 with an escape room event highlighting National Park Service (NPS) records held at the National Archives for NPS’s centennial. Kraft said that program was “a huge hit with a waiting list to fill it three or four more times.”

The education team offered it again that summer, and continued success encouraged them to develop new puzzle-based programs for adults and middle school students as well over the next few years. And back by popular demand: the “National Park Service Escape Room! Hands-on Adult Workshop” will be offered three times this summer. The updated experience will be held  in the Boeing Learning Center in the National Archives Building in Washington, DC, from 6 p.m. to 8 p.m. on June 5, July 24, and August 7.

Registration is limited and is likely to fill up fast. Watch the National Archives online Calendar of Events for registration links to the next “escape room” or other adult educational workshop.