WASHINGTON, March 28, 2018 — Last week, a team of civilian explorers discovered the USS Juneau, which was lost during World War II, near the Solomon Islands. In 1942, torpedoes from a Japanese submarine split the light-cruiser in half, sinking it almost immediately in the Pacific Ocean. More than 600 sailors died that day, including perhaps the most well-known case of siblings lost during the war.

Five brothers from Waterloo, Iowa—Albert, Francis, George, Joseph, and Madison Sullivan—all served as shipmates on the USS Juneau. Normal protocol during wartime required siblings be assigned to different units to prevent one family from having to endure such a hardship should tragedy strike. But the Sullivans insisted that they serve together and requested special permission to do so from the Secretary of the Navy. Tragically, all five brothers were killed in action when their ship sank on November 13, 1942.

The National Archives maintains the service records of U.S. military personnel, including the five Sullivan brothers and their shipmates who perished that day. Those same records allow future generations to learn and understand their story of patriotism and sacrifice, decades after the tragedy.

“There are numerous records at the National Archives that help tell the story of the USS Juneau and the Sullivan brothers,” said archivist Nathaniel Patch of the National Archives at College Park. Patch, who works daily with naval files, explained that “by using a combination of associated files, such as action reports, war damage reports, casualty files, and sometimes even deck logs, researchers can gather records that, when combined, tell a more complete story.”

In fact, sorting through files from several record groups turned up much information on the fate of the USS Juneau and the Sullivan brothers. Included among the files were several newspaper clippings telling of the tragic loss of the Navy ship and the crew, casualty reports, survivors’ accounts, official memorandums, and even letters—including the handwritten letter Mrs. Sullivan sent to the Bureau of Naval Personnel inquiring about her sons’ status upon hearing of rumors that tragedy had struck their ship.

The National Archives also maintains the personal letter that President Franklin D. Roosevelt returned to Mrs. Sullivan expressing his, and the nation's, sorrow.

For the United States, the Sullivan brothers became the ultimate symbol of heroic sacrifice during World War II.

The family’s tragedy was captured in a 1944 movie, The Fighting Sullivans, which chronicled the brothers’ childhood, their family life in Iowa, their loyalty to one another, and their decision to join the military together to fight for the United States’ cause in World War II.

Sadly, there are many stories of lost and missing brothers as evidenced by our records. In fact 23 sets of brothers were killed on the USS Arizona during the attack on Pearl Harbor. 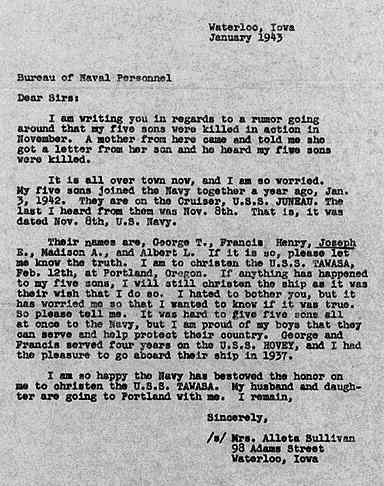 A transcript of the letter sent by the Sullivan brothers' mother to President Franklin D. Roosevelt inquiring about the rumored status of her sons and the USS Juneau during World War II. (US National Archives) 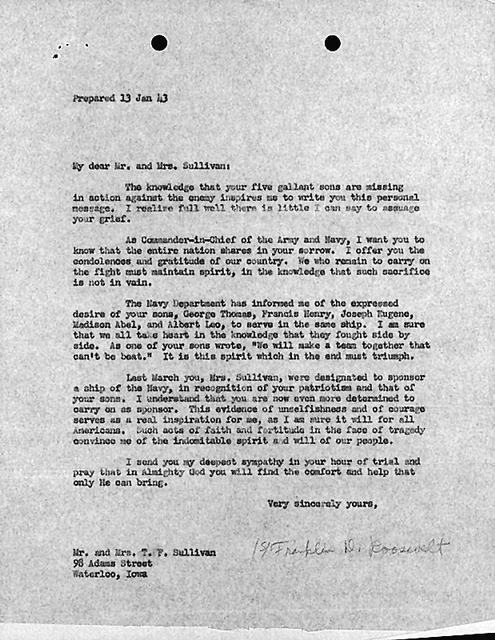 President Franklin D. Roosevelt wrote a personal letter to Mr. and Mrs.Thomas Sullivan of Waterloo, Iowa, expressing his sorrow for the loss of their five sons on the USS Juneau. (From the President’s personal file 8293, Roosevelt Presidential Library) 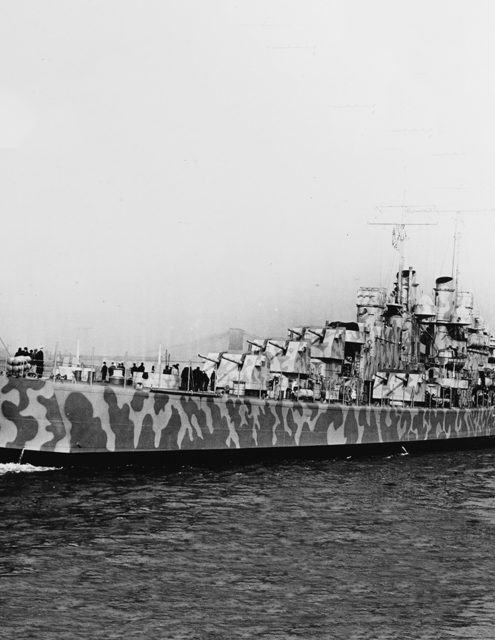 The USS Juneau sits in the New York Harbor on February 11, 1942, prior to service in the Third Battle of Savo Island, off the coast of Guadalcanal where Japanese torpedoes sank it to the bottom of the Pacific during World War II. (US National Archives) 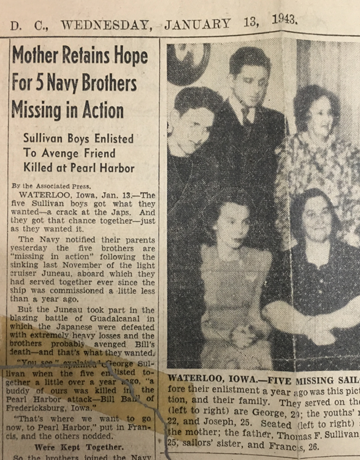 On January 13, 1942, The Washington Post told the story of the Sullivan brothers, who were then listed as "missing in action" after their ship sank in the Pacific Ocean during World War II on November 13, 1942. (U.S. National Archives) 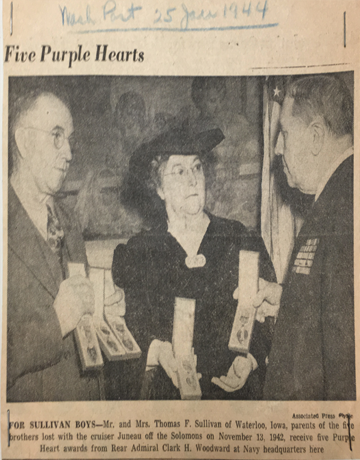 A photograph ran in the Washington Post on June 25, 1944, of Mr. and Mrs. Thomas Sullivan of Iowa receiving five purple hearts for their five sons who perished in the sinking of the USS Juneau on November 13, 1942. (U.S. National Archives

Since the tragic loss of the Sullivan brothers, the U.S. military has revised its policy on allowing siblings to serve under the same command.

The National Archives at St. Louis holds the individual civilian and military records of millions of Americans who served the U.S. Government as members of its civil and military services over the past 150 years.

Military veterans can access their own personal service records online or through the National Archives’ National Personnel Records Center (NPRC) in St. Louis, Missouri. Additional information on the process of obtaining military records, required documents, and other important information can be found on the National Archives website. The NPRC is the central repository of personnel-related records for both the military and civil services of the United States Government.

Mrs. Alleta Sullivan, mother of the five Sullivan brothers from Waterloo, Iowa, who served together on the USS Juneau, penned this letter to President Franklin D. Roosevelt inquiring about their rumored status during World War II. (US National Archives) 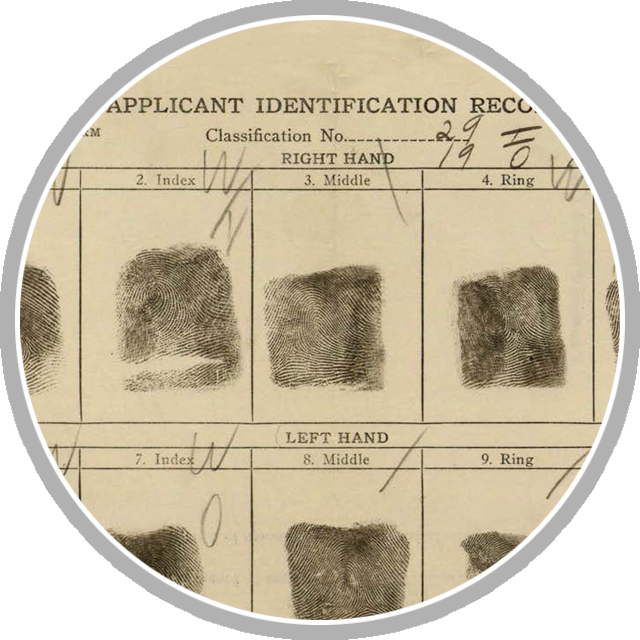 Military records of the Sullivan brothers 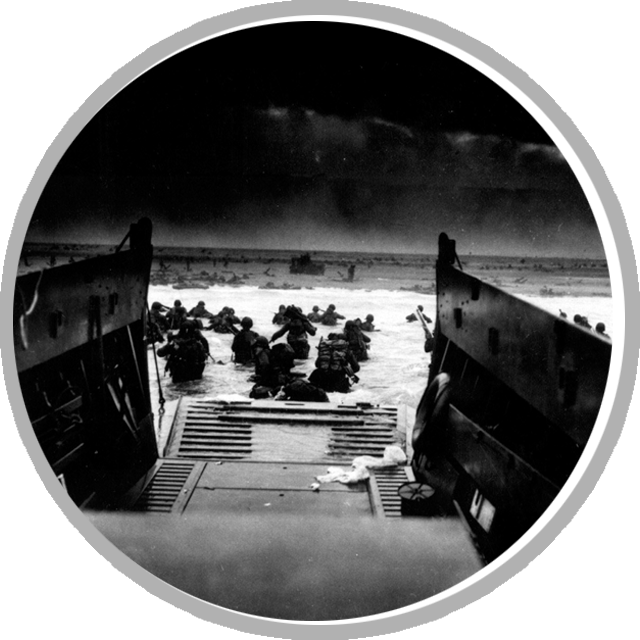 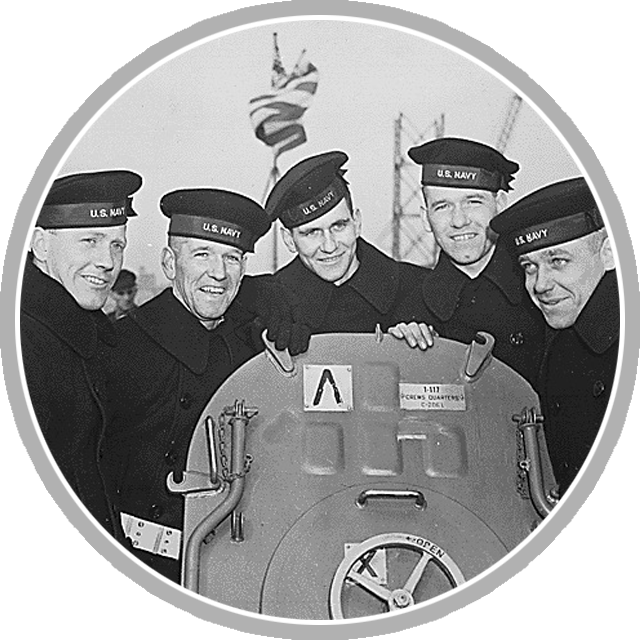