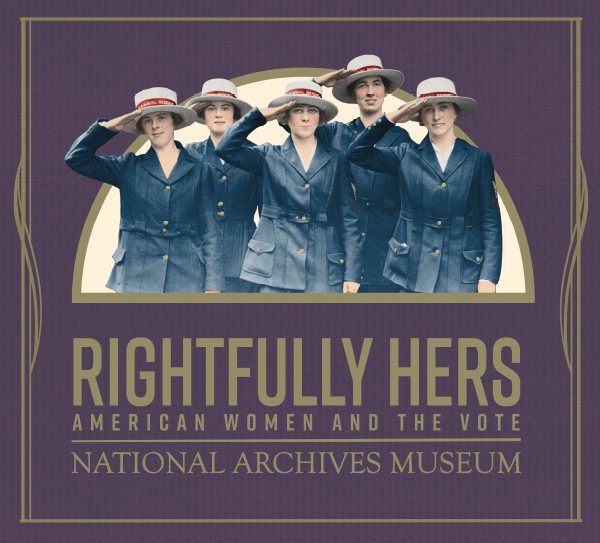 WASHINGTON, April 17, 2019 — This May, the National Archives will unveil a new major exhibit to mark the centennial anniversary of the 19th Amendment and its impact on our nation’s history. Rightfully Hers: American Women and the Vote will be the cornerstone of the agency’s celebration of the historic amendment. In addition, throughout the centennial observance, the National Archives will present a range of public programs and education programs and engage the public through social media.

Deputy Archivist of the United States Debra Steidel Wall said that the exhibit commemorates the 100th anniversary of the 19th Amendment “by looking beyond suffrage parades and protests to the often-overlooked story behind the landmark moment in American history.”

“This fuller retelling of the struggle for women’s voting rights uses the agency’s records to illustrate the dynamic involvement of American women across the spectrum of race, ethnicity, and class to reveal what it really took to win the vote for one half of the people,” Wall added.

Wall, a member of the Women’s Suffrage Centennial Commission, reflected on the importance of the 19th Amendment in her blog post, “Rightfully Hers: American Women and the Vote” on the blog of the Archivist of the United States.

“One of the special things about working in an archives is the opportunity to see original records in the course of your work,” Wall wrote. “Recently, I had the chance to view the original 19th Amendment. I reflected on how this unassuming-looking document, many messy decades in the making, empowered millions of women to step closer to equality in all aspects of American life, and, how the records we hold at the National Archives reflect that journey.”

The Rightfully Hers exhibit will be complemented by a traveling exhibit called One Half of the People: Advancing Equality for Women; pop-up exhibits for schools and other venues; a range of public programs and education programs; an active social media campaign; and robust digital engagement activities on our websites and other platforms.

The National Archives will also host a range of public programs and education programs centered on the 19th Amendment and powerful women and their roles in our nation and its history. Two recently held events—about feminism and a former First Lady—are the first in a series of scheduled programs that will highlight the roles of influential women in our nation’s history.

In an author lecture held at the National Archives on March 26, 2019, Katherine M. Marino shared her book, Feminism for the Americas, which chronicles the dawn of the global movement for feminism and women’s rights in the first decades of the 20th century. Marino’s book introduced a cast of remarkable Pan-American women who drove a transnational movement that advocated women’s suffrage, equal pay, maternity rights, and broader self-determination. These efforts led to the enshrinement of women’s rights in the United Nations Charter and the framework for international human rights. To view the entire program, see Feminism for the Americas: The Making of an International Human Rights Movement.

Then on May 5, 2019, the National Archives invited journalist and author Susan Page to share her new biography of the former First Lady Barbara Pierce Bush, one of the most storied women in American political history. Page, the Washington Bureau Chief of USA Today, traced Barbara Bush’s life from growing up in Rye, New York, to becoming America’s First Lady. Page’s book, The Matriarch, sheds new light on the political powerhouse, Bush family matriarch, former First Lady, and celebrated public servant. The author shared that while Barbara Bush’s own political beliefs sometimes differed from her husband’s, she nevertheless became an astute political campaign strategist, helping him to gain the nomination and win the White House. To view the entire program, see The Matriarch: Barbara Bush and the Making of an American Dynasty by Susan Page.

For a full list of future scheduled events, see the National Archives Calendar of Events. Related planned programs coming this month include a Voting Rights Escape Room for Adults, a forum titled For Colored Girls Who Have Considered Politics, and an author talk about Sandra Day O’Connor, An American Life.