Finding an Elephant at the National Archives

WASHINGTON, April 16, 2019 — The National Archives and Records Administration is home to more than 15 billion pages of documents. From the Charters of Freedom—the Declaration of Independence, the Bill of Rights, and the U.S. Constitution—to the records of military veterans who have served our nation, the National Archives preserves and provides access to the nation’s important documents. 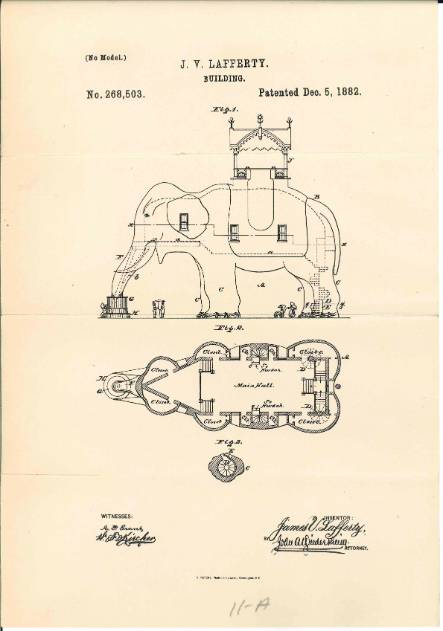 One of those collections of records includes patents that inventors have submitted to the United States Patent and Trademark Office to stake their claim on their inventions.

Robert Beebe, an archivist at the National Archives in Kansas City, recently told that the agency holds roughly 4,100,000 patents in total.

“Patents cover everything from an ancestry game to the Zamboni,” Beebe said. “But did you know that there’s even a patent for a larger-than-life elephant structure in the collection?”

Beebe recently shared this “very unique patent” that he discovered among the millions of U.S. patent records in the National Archives. And in honor of #SaveTheElephantDay on April 16, National Archives News thought today was the perfect day to share this special patent.

“I came across this patent in a book that I was reading about unusual patents,” Beebe said.

Beebe said his interest was piqued, so he began searching and found the original patent in the agency’s collection.

“It is certainly the only elephant-shaped building patent that I know of,” Beebe added. “Patents for buildings are not all that common, particularly in the Patent Case Files series. You might expect to see more in the Design Patent Case Files, where unique design of existing ideas are patented. It was also very fun to see an actual replication of that building that exists.”

Beebe explained that engineer and inventor James V. Lafferty, Jr., from Philadelphia, Pennsylvania, submitted the patent for the elephant structure on June 3, 1882. The patent documentation included a drawing of the side elevation of the building and explanations for how the building would be designed, constructed, and utilized—from the legs and the trunk to the howdah, which sits atop the structure. A howdah is a seat for riding on the back of an elephant or camel, typically with a canopy, that can carry two or more people.

Lafferty’s patent explained that the structure would include “apartments” that are “well-ventilated and lit” and that the legs would act as support structures. The patent further states “the body is properly floored...furnished with windows, doors, etc., and in the legs are stairs…for access from the ground.” Lafferty even explained that the trunk could “connect to a sewer or other conduit” and “the howdah, which completing the semblance of a bedecked elephant, acts as the observatory of the building.”  Lafferty’s patent—No. 268,503—was granted on December 5, 1882.

After finding the patent among Archives records, Beebe set out to learn more about this different structure.

“I uncovered that there were actually two other elephants built,” Beebe continued, “but ‘Lucy,’ as she’s come to be called, is the only surviving example of this patent. The pachyderm structure even has her own dedicated website.”

Lucy the Elephant sits along a beach in Josephine Harron Park in Margate, New Jersey. Listed on the National Park Registry of Historical Landmarks, she is six stories high and has a spiral staircase inside so visitors can tour the rare structure. A National Archives video found in the agency's holdings about the New Jersey coast, By the Sea. Seeing Atlantic City, 1919, contains rare footage of "Lucy" during that era.

“The patent case files document the innovation and creativity of people over the years 1836 to 1978,” Beebe said. “You can see trends in innovation change over time as new technology is created. You just never know what creative things you’ll find in our patent holdings.”