WASHINGTON, March 30, 2017 - As the National Archives and Records Administration commemorates the 150th anniversary of the purchase of Alaska from Russia on March 30, 1867, the agency’s facility at College Park is hosting an exhibition of panoramic images taken in the territory during the early parts of the 20th century.

How those images were discovered and brought to the public is a tale of archival detective work and dedicated preservation efforts.

When the National Archives preservation team embarked on reformatting and duplicating approximately 52,000 original nitrate-based negatives onto film, little was known about the 1910-1932 U.S. Geological Survey (USGS) images. It was assumed that they could have been taken by topographers and surveyors to collect data in order to map the Alaskan territory.

For the preservation team, however, the purpose of the photos did not matter. Their mission was the same: preserve our nation’s documents, images, and videos.

Thanks to one team member’s curiosity, dedication, intrepid research, and photography skills,  some treasures were found hidden among those previously unseen images of the vast Alaskan landscape. A Preservation Project and a Discovery

Richard Schneider, a special projects management and program analyst, joined the preservation effort in 2008, one year after the National Archives took custody of the USGS images. The project involved nitrate film, which can be highly combustible, if not stored correctly, and which could pose safety concerns, if not handled precisely.  Originals were kept in fire-proof metal containers in a refrigerated room and monitored to minimize the risk of internal combustion or danger to staff.

“Surprisingly most of these negatives were actually in fairly good condition,” Schneider said. “They showed minimal damage, which was likely due to water exposure, not nitrate deterioration. When unsleeved negatives get wet and then dry out, they can stick together. As a result, hundreds of images were unable to be duplicated.”

However, thousands of other images were still viable.  Schneider’s original role in the project was to organize the images for duplication. He employed systematic methods, ensuring the images were aligned in the same direction, with the sky at the top, mountains on the bottom, and emulsions were facing down.

It was through this systematic organization of the images that he noticed the same mountain in two different places on two different images. That caused him to examine the images side by side and then align them with each other.

“Much to my surprise, the images aligned to create some incredible 360-degree views of the Alaskan territory,” Schneider said. “It was like having pieces of a puzzle, and when I put the pieces together, they formed a beautiful panorama.”

Schneider said this was his “aha moment” during his preservation work.

“That made the project truly blossom for me,” Schneider said. “It was the discovery that, mixed in with the data-capture photographs, were these aesthetic gems that captured worklife in the Alaskan wilderness, photography and surveying techniques, and many noteworthy towns and geological formations.”

Schneider noted that he began scanning images, about 120 in all, himself as time permitted.

“I chose those images that I personally found visually appealing and stored them on my computer for possible later use,” he said. “I had diamonds in the rough on my computer. Every so often, I would look at them. When I discovered that several photos could be put together to form a panorama, it was a great surprise. It kept me going.”

Schneider said he hooked up several of the 5-inch by 12-inch negatives together. He said his discovery also sparked his curiosity about the original purpose of the images themselves.

“At the start of the project, nobody truly knew the purpose of the films and photos,” Schneider said.

“What I found out from some independent research on them was that the visually uninteresting photos were actually what the photographers sought to capture,” he said. “These images, taken from 1910 to 1932, were used for data gathering—for mapping the Alaskan territory. And there was a lot of area to cover.”

Through further investigative research, Schneider discovered James W. Bagley’s original publication—USGS Bulletin 657, The Use of the Panoramic Camera in Topographic Surveying (1917)—which outlined the purpose of the original photographs. Topographers, including James W. Bagley (right) are photographed in Alaska while shooting panoramas of the Alaska territory for data collection and mapping. (RG 57, Records of the USGS)

“Bulletin 657 explained how Bagley, a topographer who was relatively unknown outside the USGS, used a panoramic camera to capture images of the Alaskan countryside versus the tried and true method of relying on the sole use of the plane table and alidade,” Schneider said.

“Most of the data gathering work was done in the field throughout the continental United States. Using a plane table and alidade, the topographers would draw out the topography, capturing geologic features integral to map-making, on site,” he said. “In Alaska, with the use of panoramic photos, topographers could now capture the images of much more expansive areas then take them back to their offices in Washington, DC, for analysis, allowing for more time, more precision of mapping, more detailed maps, and less time required in the field.”

Schneider noted that this was an innovative approach to data collection and mapping.

“They would set up predetermined stations from scouting parties, take photos, and move on,” he said. “They had to process and shoot the film in the field, verify that they got what they wanted as it wasn’t simple to go back to these areas, and then print the photos back in DC.”

The investigation also uncovered another piece of the puzzle.

“The topographers often shot test rolls in the field; Most of the test photos were scenic shots or group shots,” he said.  “Those photographs ultimately formed the most visually interesting and aesthetically pleasing photographs.”  These were the photos Schneider had discovered during the National Archives’ duplication project.

Research Uncovers a Back Story

Schneider’s initial research on the origination of the photographs prompted him to continue learning about Bagley,  uncovering another very interesting part of the story.

Schneider added that “Flying itself was relatively new, and Bagley actually thought of taking photos from the sky to help the war effort.”

Bagley retired from the Army as a Lt. Colonel and went on to become a lecturer at the Institute for Geographical Exploration at Harvard University, authoring books on aerial surveying and aerial photography. Schneider said he truly felt a connection to Bagley and his life’s work.

“I‘m sure with further exploration I could find Bagley’s military service records, field notes, and other documents in the National Archives' holdings to paint an even more detailed picture. Perhaps this story is not over just yet….to be continued…” Schneider noted.

“The Long View exhibit was a sampling of panoramic photographs from still pictures that also included a sampling of holdings from the National Archives’ cartographic records,” he said. 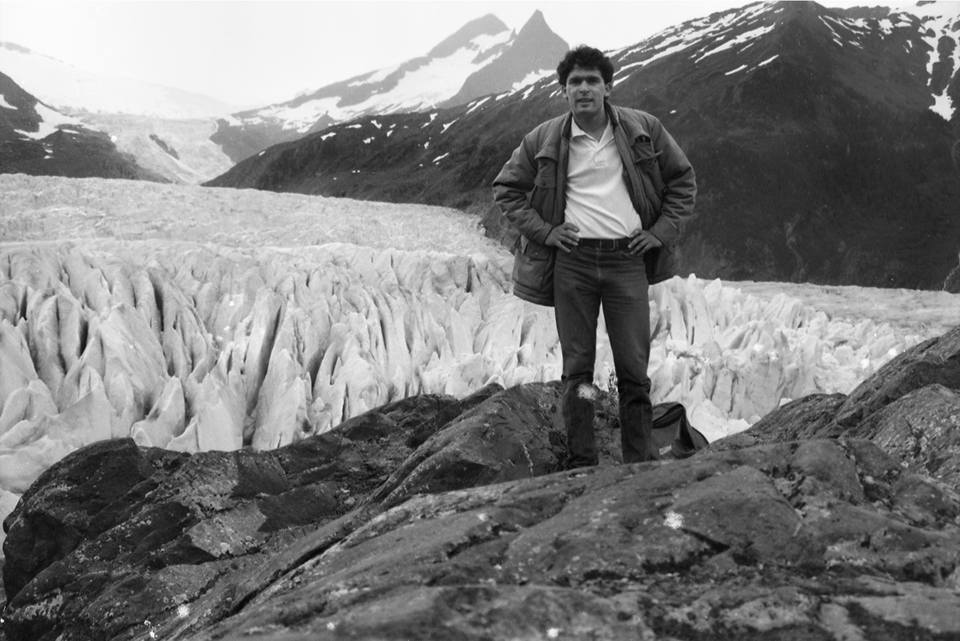 Richard Schneider’s love for Alaska started when he took on the job of cruise ship photographer in 1985.

Schneider has an abiding interest in geography, photography—specifically panoramas—and  Alaska itself.  He remembers his affinity for geography started in the 5th grade when he drew a large map of Earth on a classroom bulletin board.

Fast forward to 1985, Schneider took on a job as a ship’s photographer on the Sun Princess, a cruise ship made famous by the television show, “The Love Boat.”  In May 1985, he began the Alaska touring season, traveling from Vancouver to southeast Alaska, some of the same ports captured in the panoramic photos he was now responsible for helping to preserve and duplicate.

“The project had a huge personal connection for me. My professional experiences in Alaska allowed me to see and photograph the beautiful Alaskan countryside,” he said. “While I was there, I developed an affinity for panoramic photos, which I had studied only briefly in my college career. I discovered a local artist, who I became great friends with, who helped to develop my love for panoramic photos, and who helped to develop my skills in panoramic photography. Alaska has some of the most beautiful scenery on this Earth.”

“This preservation effort was significant. We helped to preserve information that may not have ever been known prior to this project. And in the process, we found some treasures,” Schneider said. Duplicates are in the National Archives’ still picture holdings and the preservation project complete.

Eight years in the making, Schneider crafted an exhibit based on the preservation project to share his research and work.  Titled Hidden Treasure: Panoramas of the Alaskan Frontier, the exhibit debuted on December 23, 2016, and is on indefinite display at the National Archives at College Park, Maryland.

The Hidden Treasure exhibit dramatically depicts the beauty of Alaska, using the extraordinary USGS images—a sampling of more than 6,000 panoramic photographs from the collection. All of the photos in Hidden Treasure were scanned from the original negatives and many were digitally combined into long panoramas that encompassed up to a 360-degree view.  The Hidden Treasure display features 36 framed panoramas, eight panoramas incorporated into information panels, and seven maps of the Alaska Territory from the National Archives’ cartography holdings.

Schneider concludes that he “found great satisfaction in connecting our photo records to other documents. That’s what is so amazing about the National Archives’ holdings...we have so many things that connect to paint a more thorough picture of a place, event or even a person. It’s what makes National Archives’ holdings so special and often, so invaluable and unique.”

Hidden Treasure exhibit curator Richard Schneider will discuss the historic panoramic photographs of the Alaska Territory between 1910 and 1932, from the National Archives’ extensive Still Pictures holdings. The panoramas are on display at the National Archives, College Park, Maryland.

150th Anniversary of the Alaska Purchase

In 1866 the Russian government offered to sell the territory of Alaska to the United States. Secretary of State William H. Seward, enthusiastic about the prospects of American expansion, negotiated the deal for the Americans. Edouard de Stoeckl, Russian minister to the United States, negotiated for the Russians.  On March 30, 1867, the two parties agreed that the United States would pay Russia $7.2 million for the territory of Alaska. For less than 2 cents per acre, the United States acquired nearly 600,000 square miles.  Opponents of the Alaska Purchase persisted in calling it “Seward’s Folly,” “Seward’s Icebox,” and “Polar Bear Garden” until 1896, when the great Klondike Gold Strike convinced even the harshest critics that Alaska was a valuable addition to American territory. The check for $7.2 million was made payable to Russian Minister to the United States, Edouard de Stoeckl, who negotiated the deal for the Russians. Czar Alexander II signed the Treaty of Cession, which formally concluded the agreement for the purchase of Alaska from Russia.

The United States paid Russia $7.2 million to purchase Alaska with this check.

Panoramic Photographs of the National Archives

Today's Document for the National Archives: The Purchase of Alaska