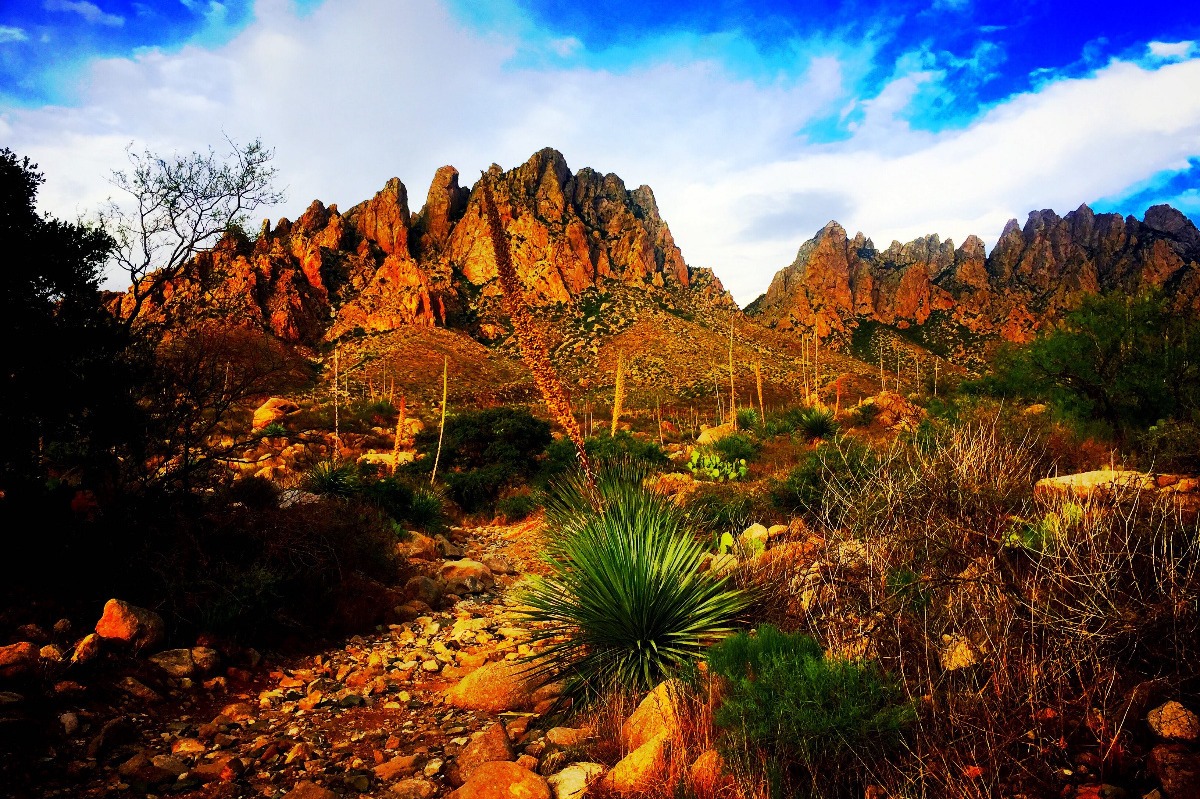 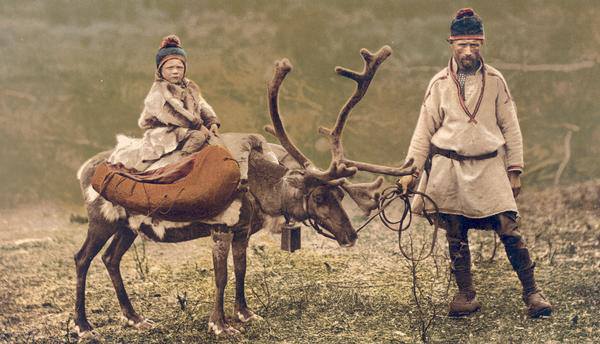 An NHPRC grant to the Alaska Library Network in Anchorage went to support a project to digitize 54,200 documents related to the history of Alaska that are maintained in the collections of six repositories located in the eastern United States. The collections to be digitizes include : The American Museum of Natural History Jesup Exhibition Collection and George Thornton Emmons ethnographic papers on the Tlingit, Haida, Athabaskan, Inupiat, Yupik, and other Alaskan Native cultures; the Northwest Coast Trade Records and the Francis Dana Papers at the Massachusetts Historical Society; the Nicholson Whaling Collection held by the Providence Public Library; the State Archives of North Carolina collection on Captain James Iredell Waddell and the CSS Shenandoah; the Sheldon Jackson Papers and Alaska Mission Files of the Presbyterian Historical Society; and additional papers of Sheldon Jackson located at the Princeton Theological Seminary.

This 1898 photograph of the introduction of domestic reindeer in Alaska is from the Presbyterian Historical Society's Sheldon Jackson Collection. Jackson (1834-1909) founded churches and missions throughout the West and Alaska. He was named U.S. General Agent for Education in Alaska in 1885. This collection includes Sheldon Jackson's journals, correspondence, and photographs relating to Jackson's work for the Board of National Missions in the West until 1877 and then in Alaska, and his personal mission to make the Presbyterian Church and U.S. government aware of problems in Alaska.

You can see more fabulous images and digitized documents at https://digital.history.pcusa.org/.../islandora:sheldon... 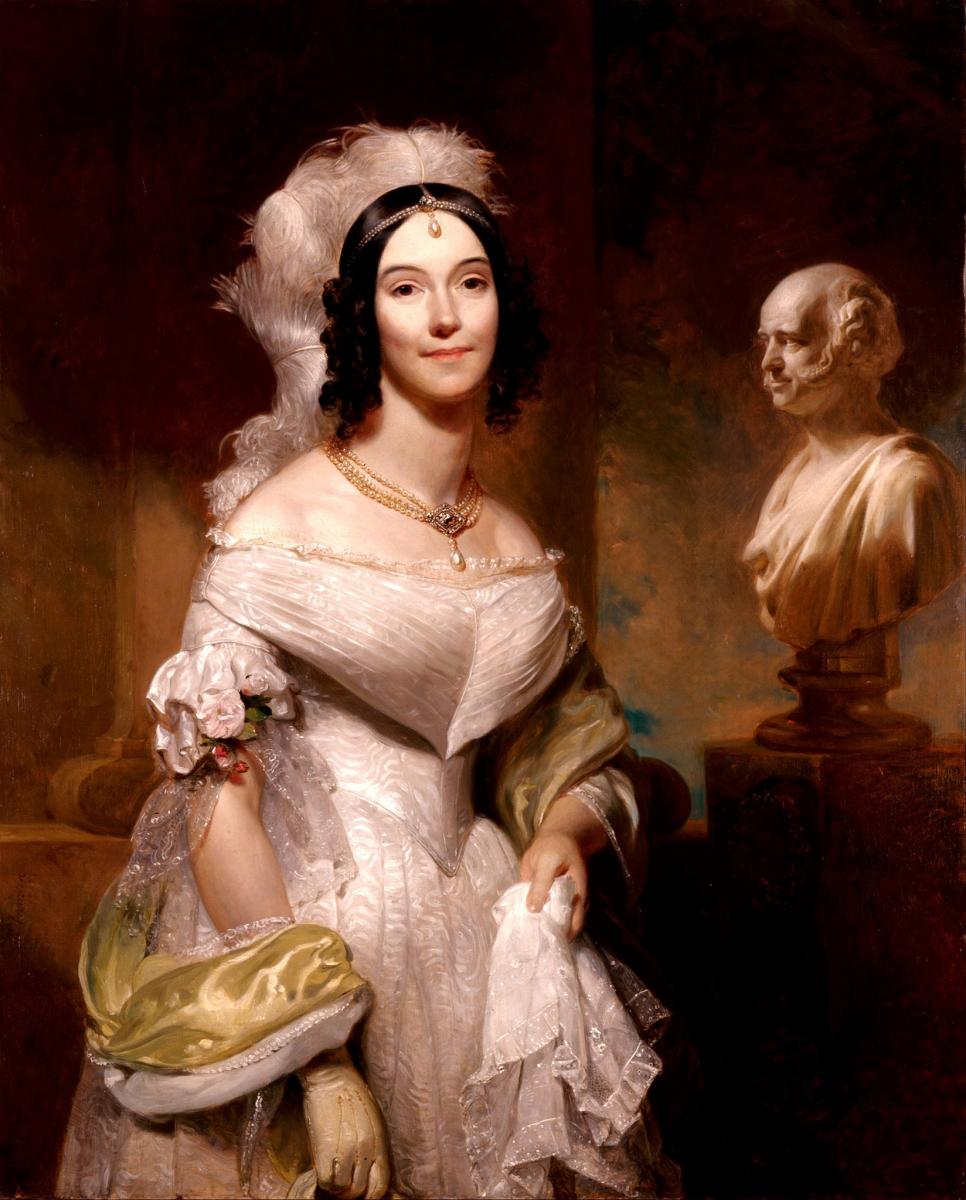 When Martin Van Buren became the 8th president of the United States in March of 1837, he was a widower and had no one to assume the traditional role of First Lady. His four sons were also unmarried. Fortunately, former First Lady Dolley Madison, famous in Washington social circles for entertaining, introduced her young cousin Angelica Singleton to Van Buren's eldest son Abraham. After she married Abraham in November 1838, Angelica Singleton (pictured here in this 1842 portrait by Henry Inman) took on the social role of the First Lady.

But Martin Van Buren’s letters show that he often relied on other women--female friends--to keep him abreast of the latest gossip. In a letter to Harriet Butler, he admitted, “Nothing serves so well to season the perpetual gossip & perpetual dissipations of this Sodom as an occasional letter from a kind hearted & sensible female friend,” and later to Judith Rives, he wrote, “Your letter has been to me a green spot in the midst of a desert of political cares.”

You can read more about Van Buren's penchant for gossip at the NHPRC-supported Papers of Martin Van Buren at http://vanburenpapers.org/.../martin-van-buren-and-quest...

Housed at Cumberland University, The Papers of Martin Van Buren is a joint digital/print project that will make accessible approximately 13,000 documents belonging to the eighth president. 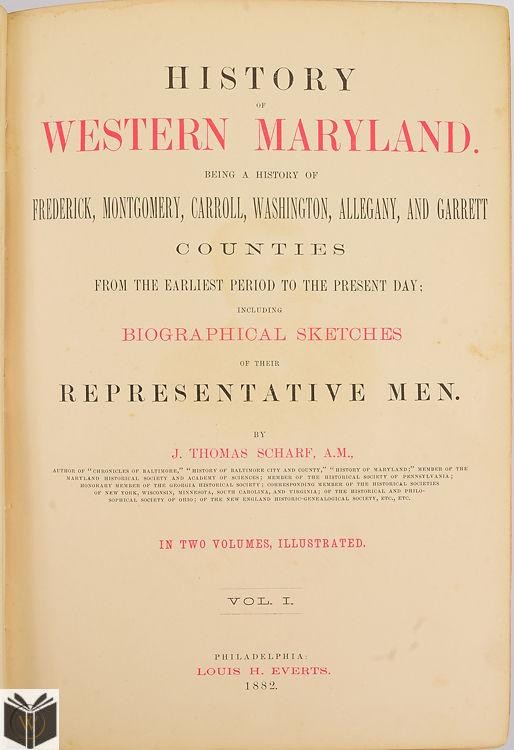 An NHPRC grant to the Maryland State Archives will help to digitize 18,000+ documents, dating from the mid-17th century to the mid-19th century, that make up the alienated government records found in the Maryland State Papers collected by John Thomas Scharf (1843 -1898). As a member of the Maryland Historical Society, Scharf sought out  historical records from around the state, often rescuing them from certain loss and destruction. In addition to his work as an historian and author, he was also a politician and lawyer and served in the Confederate navy.

In 1891, Scharf donated his collection to Johns Hopkins University in order to encourage the study of Southern history, and the University placed the Scharf materials on deposit at the Maryland Historical Society in 1948. The portion of the collection made up of government records (approximately 80%) was transferred to the Maryland State Archives in 1975 and can now be found in the Maryland State Papers (Scharf Collection) at https://msa.maryland.gov/.../s1000/s1005/html/ssi1005.html

The collection totals 40 cubic feet and documents a wide range of Maryland history and a cross-section of U.S. history from the mid-17th century into the mid-19th century. The bulk of the collection relates to colonial Maryland, the Revolutionary War, the early republic, and the War of 1812. Its broad spectrum cuts across time and place and is testimony to the lives and actions of Maryland’s people and government.

The results of this project will be freely accessible online through the Maryland State Archives Guide to Government Records (http://guide.msa.maryland.gov/pages/index.aspx).

The Ithaca Kitty is a plush toy designed by two women, Celia Mattison Smith and Charity Smith, from Ithaca, New York in 1892. The Ithaca Kitty was modeled after Celia's pet cat Caesar Grimalkin, a gray polydactyl cat with seven toes on each of his front paws. Celia designed the easy sew-your-own stuffed animal with only three panels. 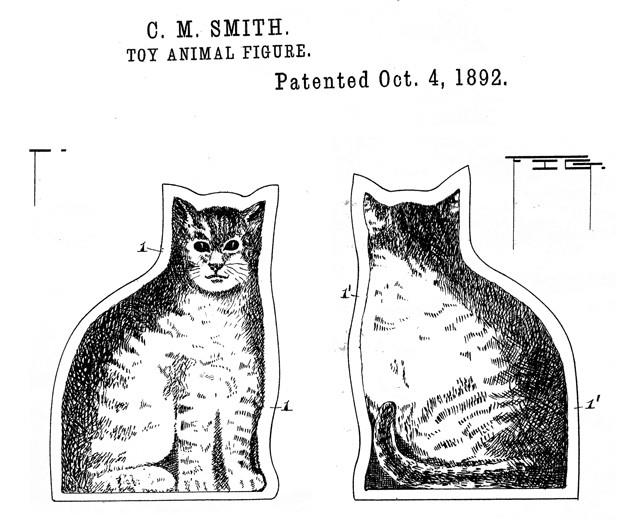 "Tabby Cat" was officially patented on July 5th and October 4th 1892. Arnold Print Works in Massachusetts bought the pattern and sold the Tabby Cat print to toy shops and department stores across the United States, and even in Europe and South America.

The Tabby Cat was such a popular toy it was displayed at the World's Fair in Chicago in 1893 along with four toy Tabby Kittens that Celia and Charity designed and patented in the fall of 1892. In addition to selling millions of copies worldwide, the Tabby Cat is the inspiration for the classic children's story, "The Gingham Dog and the Calico Cat '' by Eugene Field.

The NHPRC supported the work of the History Center in Tompkins County. HistoryForge is an innovative digital history project combining maps, archival records, and census data that allows any community to explore its local history through the individuals who lived there as well as their buildings and neighborhoods. While you won't find Caesar Grimalkin in the records, you can find out about his people, the Smiths.

To learn more about the History Forge and the Ithaca Kitty, go to their History at Home page at https://thehistorycenter.net/.../IthacaKitty....

Purrfect for a rainy summer day when the kids are stuck inside. 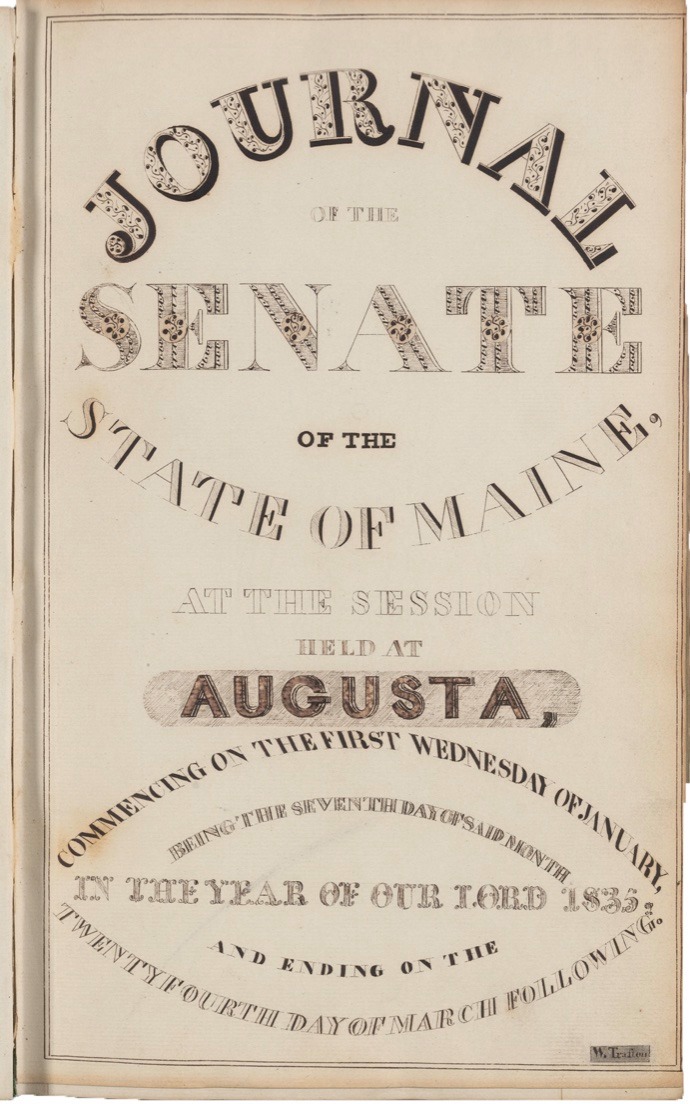 The Digital Maine Transcription Project invites you to make significant Maine documents accessible online through the use of crowdsourcing.

You can help transcribe those early legal records.

The Digital Maine Transcription Project started in 2016 as a collaborative project of the Maine State Archives and Maine State Library. The decision was made to open up access to as many digital images of original documents as possible, but staff lacked time to transcribe them.

Building upon other national projects such as those at the Smithsonian and University of Iowa, staff developed this partner project to encourage members of the public to participate. Individuals can now assist by transcribing individual documents and sharing their work with the world.

Birth of the Acid Western 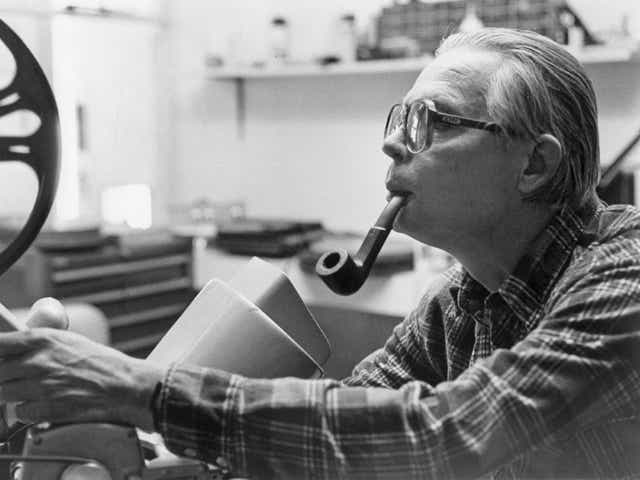 "The Devil's Mistress" is an independent film made in 1965 by Orville "Buddy" Wanzer in Las Cruces, New Mexico. Wanzer wanted to make a “modern western, without the cavalry and without the Indians.” The movie tells the story of four robbers on the lam, escaping toward the Organ Mountains when they happen upon the devil and his mistress, and meet their doom.

Inspired by Wanzer's film, a new documentary "Birth of the Acid Western" explores the history of the western genre, filmmaking in New Mexico, and the fraught relationship between artists and their art. Director Julia Smith is working with Creative Media Institute for Film and Digital Arts at New Mexico State University students and community members to produce the film, and is building an archive around the life and work of Orville Wanzer in collaboration with the Rio Grande Historical Collections at NMSU and the Institute of Historical Survey in Mesilla Park.

The NHPRC awarded funds to the New Mexico Historical Records Advisory Board (NMHRAB) re-grant program, which in turn funded a project at the Institute for Historical Survey to digitize 500 of Wanzer’s photographic slides. John Freyermuth, former library specialist at NMSU, provided subject descriptions for each photographic slide prior to digitization, including common and scientific names of plant life and locations of New Mexico scenery. A curated selection of these images is now available for open-access viewing through the New Mexico Digital Collections online digital archive at nmdc.unm.edu.

You can also learn more about Wanzer at https://www.youtube.com/watch?v=O8xM3pqMzDM and the Birth of the Acid Western at http://birthoftheacidwestern.com/index.html