How Do I Identify Motion Picture Film Formats? 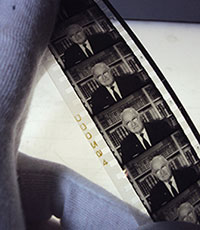 Most people and institutions do not have the equipment necessary to view motion picture films. If you have access to a projector, be sure to evaluate both the projector and the condition of the film before you consider using it. Film may be easily damaged by a projector if it hasn’t been maintained regularly or if the film has condition issues. If you wish to preserve and protect the content of the film, we recommend seeking out a service provider with experience working with archival motion picture film. The service provider will be able to help stabilize your film and create a digital copy for viewing or preservation.

Once you have confirmed that you have a film (refer to our Film Characteristics page) you can identify other properties that will help you talk to a service provider about it. You can do this even if you do not have film handling or viewing equipment. You should gather the following information about the film and then may use our Determining Condition webpage to perform a quick condition assessment in order to assist the service provider in planning a course of action.

Note the relative difference in size between strips of 8mm, 16mm, and 35mm motion picture film. The 8mm film in this image is regular 8mm.

Prior to modern color film processes, film was sometimes hand-painted, tinted or toned in order to add color. There are also many early processes that required extra equipment to present the image in color. More modern color processes embed dyes or pigments in discrete layers within the emulsion to create successive layers of cyan, magenta and yellow that combine to create full color.

Sometimes you will see a piece of film that only contains the soundtrack and no picture. These may also be optical or magnetic.

In other cases, sound was recorded on disc or some other media meant to sync with the film during playback.