Vietnam and the Presidency Conference

A two-day conference sponsored by all of the Presidential Libraries and the National Archives.

On March 10 and 11, 2006, the Kennedy Library hosted "Vietnam and the Presidency," a two-day conference sponsored by all of the Presidential Libraries and the National Archives and Records Administration.

Deborah Leff, director of the Kennedy Library, opened the conference with welcoming remarks and then turned the program over to the Archivist Allen Weinstein, who requested a moment of silence for the people who died on all sides of the Vietnam conflict.

Enlarge
Historians Marilyn Young, George Herring, and Robert D. Schulzinger listen to Archivist Allen Weinstein during the first panel of the Â“Vietnam and the PresidencyÂ” conference held at the Kennedy Library.

The Archivist moderated the first panel, "How We Got In: The United States, Asia, and Vietnam," with historians George Herring, University of Kentucky; Robert D. Schulzinger, University of Colorado, Boulder; and Marilyn Young, New York University.

Assistant Archivist for Presidential Libraries Sharon Fawcett moderated the second session, "Vietnam and Presidential Tapes." David Kaiser, professor of strategy and policy at the Naval War College; Timothy Naftali, director of the Presidential Recordings Program at the University of Virginia's Miller Center for Public Affairs; and Jeffrey Kimball, professor of history at Miami University, played selected excerpts from the Kennedy, Johnson, and Nixon White House tapes, providing a unique and intimate view into the thoughts of these presidents about the war and the difficult decisions they faced.

The Keynote address was given by acclaimed author David Halberstam, who won the Pulitzer Prize for his reporting for the New York Times during the Vietnam War. 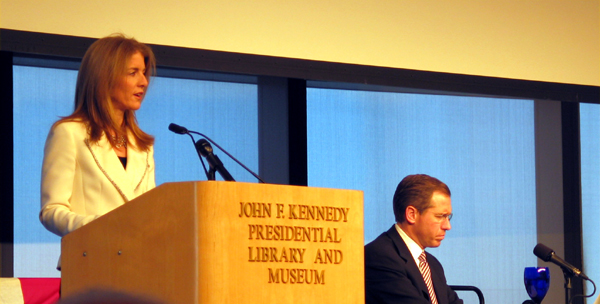 Enlarge
Caroline Kennedy welcomes conference attendees to the second day of programming. Brian Williams, who moderated the dayÂ’s sessions, sits to the right.

In the opening remarks on the second day, Caroline Kennedy expressed her support of the conference and Presidential Libraries, stating:

"This conference brings together participants and observers of our country's conflict and plays a critical role in helping people understand Vietnam. "

Brian Williams moderated the second day of the conference, including the question and answer sessions after each panel's presentation. The audience took advantage of these opportunities, asking pointed and engaging questions. The parallels between the Vietnam War and the current war in Iraq were evident throughout the conference, both in the audience's questions and the panelists' comments.

A humorous moment of the conference occurred when Caroline Kennedy read a letter Brian Williams wrote to President Johnson in 1966, when the aspiring journalist was seven and a half years old. "...I have not ben [sic] in the White house befor [sic]. but I will some time." 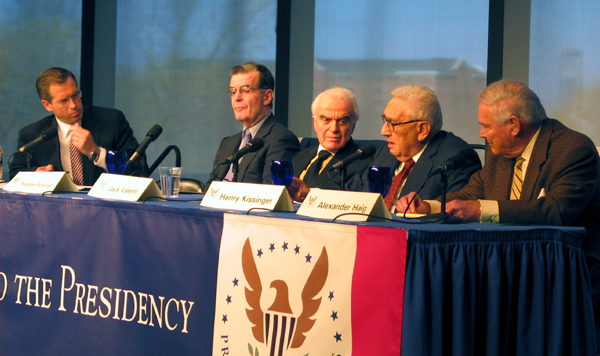 Former President Jimmy Carter, in a videotaped interview for the event, discussed the legacy of the war, his efforts to normalize relations with Vietnam, and the impact the war had on the handling of the Iran hostage crisis.

In a rare appearance, General Alexander Haig, Secretary of State Kissinger, Special Counsel to President Kennedy Theodore Sorensen, and Special Assistant to President Johnson Jack Valenti discussed their thoughts about the Vietnam War and the current situation in Iraq. The distinguished panelists gave an inside perspective on the presidents' thoughts about Vietnam, as well as the care taken and the anguish felt as they made decisions about the conflict.

After lunch, former war correspondents Steve Bell and Dan Rather along with Frances Fitzgerald, Pulitzer Prize and the National Book Award-winning author for Fire in the Lake: The Vietnamese and the Americans in Vietnam, discussed the media and the role of public opinion in war. 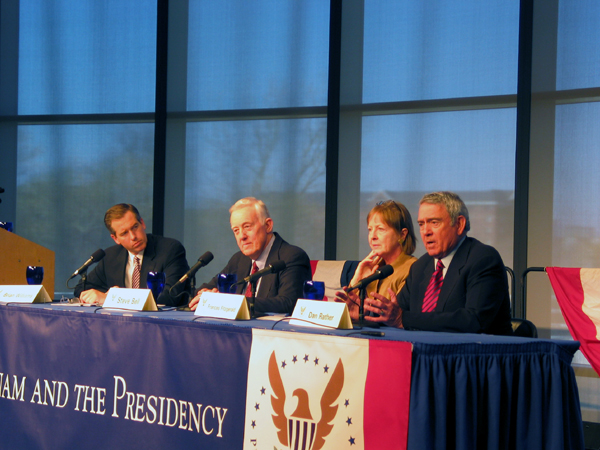 Enlarge
Dan Rather, CBS News War correspondent, answers a question from the audience. From left to right: Brian Williams, Steve Bell, Frances Fitzgerald, and Dan Rather.

The topics of conversation ranged from descriptions of how reporting occurred from the war front to emotional accounts of interviews with Vietnam soldiers. Upon impromptu audience encouragement, Pulitzer Prize-winning journalist John Burns of the New York Times, who had recently returned from Baghdad, also spoke for a few minutes about his experiences in Iraq.

The final panel consisted of four veterans: retired general and former NATO Supreme Allied Commander Wesley Clark; Senator Hagel, New York Times columnist Bob Herbert, who served in Korea in the 1960s; and Pete Peterson, who spent over six years as a POW and later became the first American Ambassador to postwar Vietnam. The men drew repeated rounds of applause as they recounted their experiences in war and what can be learned from Vietnam. Peterson, in particular, gave a particularly moving account of his daily struggle to survive as a prisoner of war. He said, "When you are in a situation like that, the first thing you have to do is decide that you are going to live."

Unprecendented Conferences Draws to a Close

A combined attendance, over the two days, reached nearly 1,250 people. The entire event, in addition, was broadcast live at the University of Massachusetts. As Archivist Allen Weinstein stated about the variety of participants, "one unifying factor is our common interest in history." 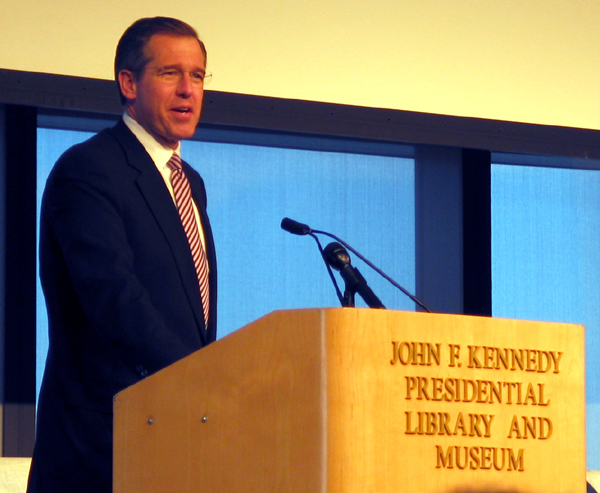 "Vietnam and the Presidency" is the first national conference sponsored by all of the Presidential Libraries from Hoover to Clinton — including the Richard M. Nixon Library and Birthplace. Individual Library foundations, library trust funds, and the Foundation for the National Archives provided the funding for the conference.

(All photographs taken by Ben Irwin, Office of Presidential Libraries.)