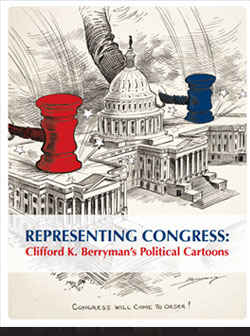 Clifford and Jim Berryman were among Washington's best-known and most-admired graphic political commentators from 1898 to 1965. Clifford K. Berryman drew for the Washington Post from 1890 until 1907, and then for the Evening Star from 1907 until his death in 1949. His son, Jim, joined the Evening Star in 1935 and drew for the paper until his retirement in 1965, winning a Pulitzer Prize in 1950. Berryman cartoons touched on a variety of subjects including politics, Presidential and congressional elections, both World Wars, and even Washington weather.