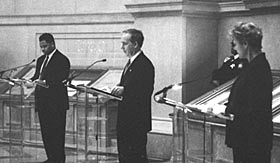 Flanked by Jesse Jackson, Jr., and Cokie Roberts, and with the Charters of Freedom as a backdrop, Archivist John W. Carlin announces the results of The People's Vote. (Photo by Earl McDonald)

From September 17, 2003 (Constitution Day), through December 1, 2003, nearly 40,000 Americans all across the country cast more than 300,000 votes for the documents they believed had most influenced American history.

Some of these records are well known, like the Declaration of Independence, Constitution, or Bill of Rights, but some played a lesser known role in history. For example, the Morrill Act, enabled new western states to establish colleges for its citizens, opening educational opportunities to thousands of people, and the Keating-Owens Child Labor Act, limited the working hours of children and forbade interstate sale of goods produced by child labor.

In a Rotunda ceremony on December 15 (Bill of Rights Day), John W. Carlin, Archivist of the United States, announced the results of The People's Vote.

In announcing the winners, Carlin had assistance from two special guests: journalist and Foundation for the National Archives board member Cokie Roberts and Representative Jesse Jackson, Jr., of Illinois. Roberts and Jackson took turns reading passages from the winning documents.

A total of 315,052 votes were cast by 39,075 people. This was truly a diverse national initiative, as people from all geographic regions and age groups participated. More votes came from the Midwest than any other region, followed by the Northeast. Almost twice as many males voted as females.

About fifteen thousand of the voters were over fifty years old, and the next largest age group of participants were people between eighteen and thirty-four years old. There were about eight thousand voters in this group.

Almost twenty-seven thousand votes were cast online, while approximately twelve thousand people voted by paper ballot. The paper ballots allowed voters to write in documents that were not on the list of one hundred milestone documents. Most of the write-in choices were records from after 1965, the cut-off date for the list of milestone documents. Among some of the recurring write-in votes were President Ronald Reagan's speech that implored "Mr. Gorbachev, tear down this wall"; the Medicare Act; the Supreme Court decision on Roe v. Wade; and President George W. Bush's speech in the wake of the September 11, 2001, attacks. 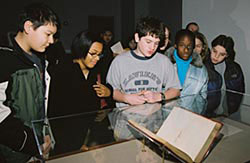 Students from the Lab School in Washington, D.C., shown viewing the Social Security Act, made The People's Vote part of their classroom activities.

In ascending order, the top ten documents as voted on by the people of the United States are

10) The Social Security Act
"An Act to provide for the general welfare by establishing a system of Federal old-age benefits, and by enabling the several States to make more adequate provision for aged persons, blind persons, dependent and crippled children, maternal and child welfare, public health, and the administration of their unemployment compensation laws; to establish a Social Security Board; to raise revenue; and for other purposes."

On August 14, 1935, the Social Security Act established a system of old-age benefits for workers, benefits for victims of industrial accidents, unemployment insurance, and aid for dependent mothers and children, the blind, and the physically handicapped.

9) Civil Rights Act
"An act to enforce the constitutional right to vote, to confer jurisdiction upon the district courts of the United States to provide injunctive relief against discrimination in public accommodations, to authorize the Attorney General to institute suits to protect constitutional rights in public facilities and public education, to extend the Commission on Civil Rights, to prevent discrimination in federally assisted programs, to establish a Commission on Equal Employment Opportunity, and for other purposes."

Signed into law by President Lyndon Johnson on July 2, 1964, the Civil Rights Act prohibited discrimination in public places, provided for the integration of schools and other public facilities, and made employment discrimination illegal. This document was the most sweeping civil rights legislation since Reconstruction.

8) Gettysburg Address
"Four score and seven years ago our fathers brought forth, upon this continent, a new nation, conceived in liberty, and dedicated to the proposition that 'all men are created equal.'"

Speaking of a "new birth of freedom," President Abraham Lincoln delivered one of the most memorable speeches in U.S. history at the dedication of the cemetery for the Union war dead in Gettysburg, following the most famous battle of the Civil War in July 1863.

7) The Thirteenth Amendment to the Constitution
"Neither slavery nor involuntary servitude, except as a punishment for crime whereof the party shall have been duly convicted, shall exist within the United States, or any place subject to their jurisdiction."

Passed by Congress on January 31, 1865, and ratified on December 6, 1865, the Thirteenth Amendment abolished slavery in the United States.

Passed by Congress on June 4, 1919, and ratified on August 18, 1920, the Nineteenth Amendment granted women the right to vote.

5) Emancipation Proclamation
"And by virtue of the power, and for the purpose aforesaid, I do order and declare that all persons held as slaves within said designated States, and parts of States, are, and henceforward shall be free; and that the Executive government of the United States, including the military and naval authorities thereof, will recognize and maintain the freedom of said persons."

President Abraham Lincoln issued the Emancipation Proclamation on January 1, 1863, thereby including the abolition of slavery as a war aim of the Union.

In this transaction with France, signed on April 30, 1803, the United States purchased 828,000 square miles of land west of the Mississippi River for fifteen million dollars. For roughly four cents an acre, the United States doubled its size, expanding the nation westward.

3) Bill of Rights
"Article the third . . . Congress shall make no law respecting an establishment of religion, or prohibiting the free exercise thereof; or abridging the freedom of speech, or of the press; or the right of the people peaceably to assemble, and to petition the Government for a redress of grievances."

Although twelve amendments were originally proposed, the ten that were ratified became the Bill of Rights in 1791. They defined citizens' rights in relation to the newly established government under the Constitution.

This four-page document, which established the government of the United States, was drafted in secret by delegates to the Constitutional Convention during the summer of 1787 and signed on September 17, 1787.

1) Declaration of Independence
"We hold these truths to be self-evident, that all men are created equal, that they are endowed by their Creator with certain unalienable Rights, that among these are Life, Liberty, and the pursuit of Happiness."

The Continental Congress adopted the Declaration of Independence on July 4, 1776. It was engrossed on parchment, and on August 2, 1776, delegates began signing it. More than three-quarters of the voters named this document as one of the most influential in American History.

After announcing the results of The People's Vote, Carlin said, "What is very apparent here is that we Americans hold our rights and freedoms—and the documents that proclaim and protect them—in very high regard, for the majority of these documents deal with individual liberties and the right to vote."

No other project has invited Americans from all walks of life, all across the country, to voice their opinions on the documents that have shaped our history, culture, and society today. Not only did The People's Vote challenge voters to really think and learn about the one hundred milestone documents, but it encouraged enthusiastic debate in homes, classrooms, workplaces, and online.

The goal of The People's Vote was not only to make Americans more aware of some of the important records that have influenced our history and defined our people, but also to increase their interest in all the records held by the National Archives.

For in America—in a democracy—records matter.

For more information on all of the one hundred milestone documents, go to www.ourdocuments.gov.

The ten most influential documents in American history, as chosen by The People's Vote. The percentage of voters that chose each document in also included.