The Alaskan Frontier in Panorama
Some of the first panoramic photos of the Alaskan wilderness are held in the National Archives. Richard E. Schneider tells the story of how these century-old photos were preserved.

A Place in the Archives
Love, dinosaur tracks, and your own letters are all part of the National Archives. Miriam Kleiman shows us the personal side of our nation's holdings.

A Tower in Nebraska
What do Maryland's National Naval Medical Center and Nebraska's state capitol have in common? A lot more than you'd think. Raymond P. Schmidt recounts how Franklin Delano Roosevelt's design for the medical center was inspired by a stopover in middle America.

Ike and His Spies in the Sky
David Haight

Genealogy Notes: "How an eagle feels when his wings are clipped and caged"
Rebecca K. Sharp

Authors on the Record: An Island Fort as Presidential Hideaway
Free on Scribd

Foundation for the National Archives

Pieces of History: A Hero Pigeon of World War I
Free on Scribd 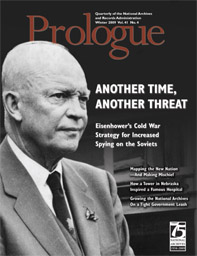 "How an eagle feels when his wings are clipped and caged"