Angela Yvonne Davis is a prominent political activist, scholar, and author. She emerged as the leader of Communist Party USA in the 1960s and had close ties to the Black Panther Party. She has advocated for the abolishment of prisons and the prison-industrial complex. She is currently Distinguished Professor Emerita at the University of California, Santa Cruz, where she taught in the History of Consciousness Department and is the former director of the Feminist Studies Department.

Angela Davis is well known for a notable arrest and trial in 1970. In January 1970 George Jackson, an inmate at Soledad Prison in California, and two other prisoners were charged with killing a prison guard. During the trial, Jackson’s 17-year old brother Jonathan Jackson took over a Marin County courtroom where he armed the black defendants and took the judge, prosecutor, and three female jurors hostage. By the end of the whole ordeal, the judge, Jonathan Jackson, and the armed defendants were killed while the prosecutor and one of the jurors were injured. Davis was accused of purchasing the guns used in commission of the crimes so she was charged with “aggravated kidnapping and first degree murder." Learn more about Angela Davis 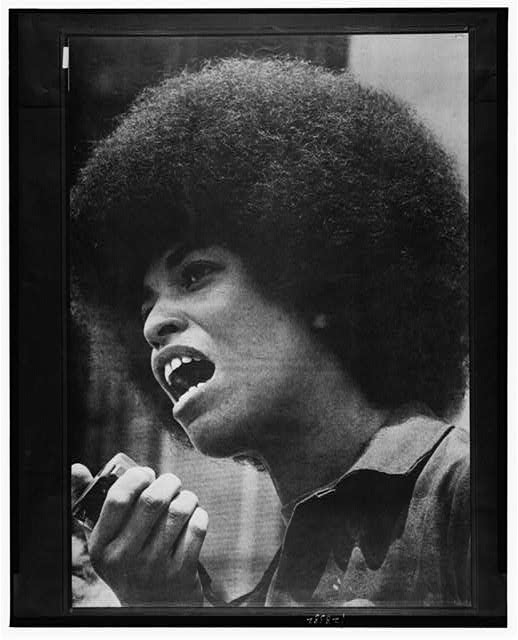 Search the Catalog for Records Relating to Angela Davis

Davis fled prosecution. Four days after the initial warrant was issued, J. Edgar Hoover listed Angela Davis on the FBI’s Ten Most Wanted Fugitive List. She was on the run for two months before being apprehended in New York City. Thousands of activists around the world organized in her defense and demanded her release. After being incarcerated for sixteen months, Davis was tried and on June 4, 1972 she was found not guilty by an all-white jury.

After her trial, Davis visited various Communist nations, including Cuba, the USSR, and East Germany. Upon returning to the United States, she resumed her teaching career, holding positions at several universities and colleges in California, including the Claremont Colleges, San Francisco State University, and the University of California-Santa Cruz, where she taught from 1991 to 2008. In addition to her teaching career, she has written a dozen books and has continued to lead the fight against racism, patriarchal oppression, war, incarceration, and the death penalty. Davis left the Communist Party in 1991 and established the Committees for Correspondence of Democracy and Socialism. In the early 1980s she was married to photographer Hilton Braithwaite. In 1998 she talked about her lesbian identity in an article in OUT magazine.

Most of the records at the National Archives relating to Angela Davis are textual, but there are also sound recordings (three at the National Archives facility in College Park, MD and one in the Ronald Reagan Library in Simi Valley, CA). Many of the textual records are from Record Group 65: Records of the Federal Bureau of Investigation, 1896-2008, Series: Classification 157 (Civil Unrest) Case Files, 1957-1978.