What military records does NARA have?

The National Archives does not hold state militia records. For these records, you will need to contact the appropriate State Archives.

How can Military Records help in my genealogy research?

Military records can often provide valuable information on the veteran, as well as on all members of the family. For example:

How do I begin?

There is no simple explanation for how to begin research in military records. Your research path will depend on aspects such as: what branch of service your ancestor was in, which conflict, what dates, whether Regular Army or a volunteer unit, whether your ancestor was an officer or enlisted personnel, and whether there was a pension application.

The approach to researching records of enlisted men and women, officers, and for the different branches of the military is described in this article: An Overview of Records at the National Archives Relating to Military Service.

Compiled Military Service Records for Volunteers:
When researching volunteers who served in the military for a particular war, start with the compiled military service records. Begin by searching the appropriate name indexes on NARA microfilm. If the compiled military service records have not been reproduced on microfilm, researchers may request to see the original records at the National Archives Building in Washington, D.C.

Regular Army:
Since the War Department did not compile military service records for those who served in the Regular Army, start your research with:

Read more about beginning research in military records in the Prologue article, An Overview of Records at the National Archives Relating to Military Service.

How can I search the military records?

Also check the Microfilm Catalog, or contact the Regional Archives in your area, as the Regions may also have the military service records that you are looking for on microfilm.

Links to other military resources online

What are people asking on History Hub?

Find answers to your military research questions at History Hub 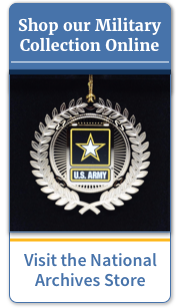 View a recent newscast on some of the treasures in NARA's National Personnel Records Center in St. Louis.
Read the transcript

New to Research in Military Records?
An Overview of Records at the National Archives Relating to Military Service

The story behind Modern Military Service Records
What's inside an OMPF and what goes on at the National Personnel Records Center.