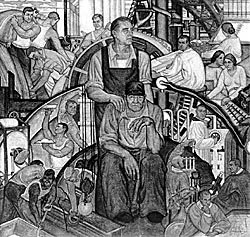 Interactive Periodic Table of the New Deal
The Franklin D. Roosevelt Presidential Library has devised this interactive chart based on the periodic table of elements. "The table presents major programs, players and events surrounding the New Deal and includes brief definitions or descriptions."

The New Deal in Action
The Franklin D. Roosevelt Presidential Library provides this list of projects built by New Deal agencies. The list, which is not comprehensive, can be searched or browsed. "The purpose of this list is to demonstrate how the New Deal helped to shape this country by providing specific examples of infrastructure and cultural projects created by the Alphabet Agencies in communities across the nation." The public is invited to submit projects to the list.

"The WPA Census Soundexing Projects"
In this Prologue article, Claire Prechtel-Kluskens describes the WPA's projects to create indexes to census schedules, which became a tremendous help to genealogists.

The 1930s
This collection from the PBS series American Experience includes several films that can be viewed online, articles, photographs, and a teacher’s guide.

Address on Agricultural Adjustment Act, 1935
PBS presents a transcript of President Roosevelt's address to the nation describing the ways in which conditions had improved for farmers.

The American Guide Series
The U.S. Senate provides an annotated listing of the 48 travel guides produced by the Federal Writers Project.

American Life Histories: Manuscripts from the Federal Writers’ Project
The Library of Congress offers a collection of manuscripts representing the work of over 300 writers. Interviews with people in 24 states are presented in various formats such as narrative, dialogue, and case history. The project resulted in about 2900 documents describing life in America during the Depression.

CCC: A New Deal to Rebuild a Nation
A five part lesson plan from the National Park Service.

Civilian Conservation Corps Legacy
Provides information about the history of the CCC as well as aids for researchers, including a bibliography of materials related to the CCC and a list of CCC camps. This organization represents CCC alumni.

The Civilian Conservation Corps, What It Is and What It Does
Digitized version of the 1940 booklet from the Broward County Library's Digital Collections.

Farm Security Administration/Office of War Information Black-and-White Negatives
"The photographs in the Farm Security Administration - Office of War Information Photograph Collection form an extensive pictorial record of American life between 1935 and 1944." This collection from the Library of Congress contains images from such photographers as Dorothea Lange, Walker Evans, Ben Shahn, and more.

Federal Theatre Project
George Mason University Libraries present this collection of "nearly one thousand different 35mm slides taken from original posters." In addition to the gallery of digitized images, the site includes a map, a timeline, and an alphabetical list of posters.

National New Deal Preservation Association
A non-profit organization whose goal is to raise awareness about the legacy of New Deal programs and encourage the preservation of materials related to these projects. The association maintains a web site with information about the organization, its activities, and various New Deal topics, as well as links to other web resources.

The New Deal
This chapter from Federal Rural Development Policy in the Twentieth Century describes the effects of New Deal policies and programs on agriculture.

New Deal Artwork: GSA's Inventory Project
A description of the General Services Administration effort to catalog "movable New Deal artworks housed in non-federal repositories. In collaboration with repositories, GSA aims to provide a centralized resource of information about New Deal artwork that is readily available to museum professionals, the academic community, art conservators and the public at large."

New Deal Collections
Materials available on this website from the Archives of American Art include finding aids and oral histories of New Deal artists.

New Deal Era and Its Origins
This web site, sponsored by H-Net Humanities and Social Sciences OnLine, provides a forum for research and teaching the history of the United States from 1918 to 1945.

President Franklin Delano Roosevelt and the New Deal, 1933-1945
Teacher resources from the Library of Congress.

WPA Murals
This website provides listings by state of murals created by artists of the Works Progress Administration. Information for each mural includes the location, the artist, title, date, and medium. Some listings include an image of the mural.

WPA Posters
A Library of Congress collection consisting of 907 original posters produced from 1936-1943 by various agencies of the WPA.

WPA/TVA Archaeological Photographs
The University of Tennessee Frank H. McClung Museum and the Libraries provide this database of "information describing photographs taken by Works Progress Administration (WPA) workers of archaeological projects conducted in preparation for Tennessee Valley Authority (TVA) dam construction in the 1930s." The database can be either searched or browsed.