The 1810 population census was the Third Decennial Census of the United States. Taken every 10 years since 1790, census records provide a snapshot of the nation's population.

Frequently Asked Questions About the 1810 Census

The census began on Monday, August 6, 1810, and was finished within 9 months, under the rules and directions established in an Act of Congress approved March 26, 1810 ( “An Act providing for the third census or enumeration of the inhabitants of the United States,” 2 Statutes at Large 564 ).

The law required "That every person whose usual place of abode shall be in any family on [August 6, 1810], shall be returned, as of such family; and the name of every person who shall be an inhabitant of any district or territory without a settled place of residence, shall be inserted in the column of the schedule, which is allotted for the heads of families, in that division where he or she shall be on [August 6, 1810]; and every person occasionally absent at the time of the enumeration, as belonging to that place in which he usually resides in the United States."

The Federal Government did not provide blank printed forms to the U.S. Marshals.   Uniform printed forms were used only if supplied by the U.S. Marshal at his own expense to his assistants.  Otherwise, the assistant marshals used whatever paper was available, and recorded the information by hand in the format required by Congress shown below.  There may be annotations on and attachments to these schedules, such as certificates of oaths taken and population totals.  Later annotations include handwritten and mechanically-stamped page numbers. 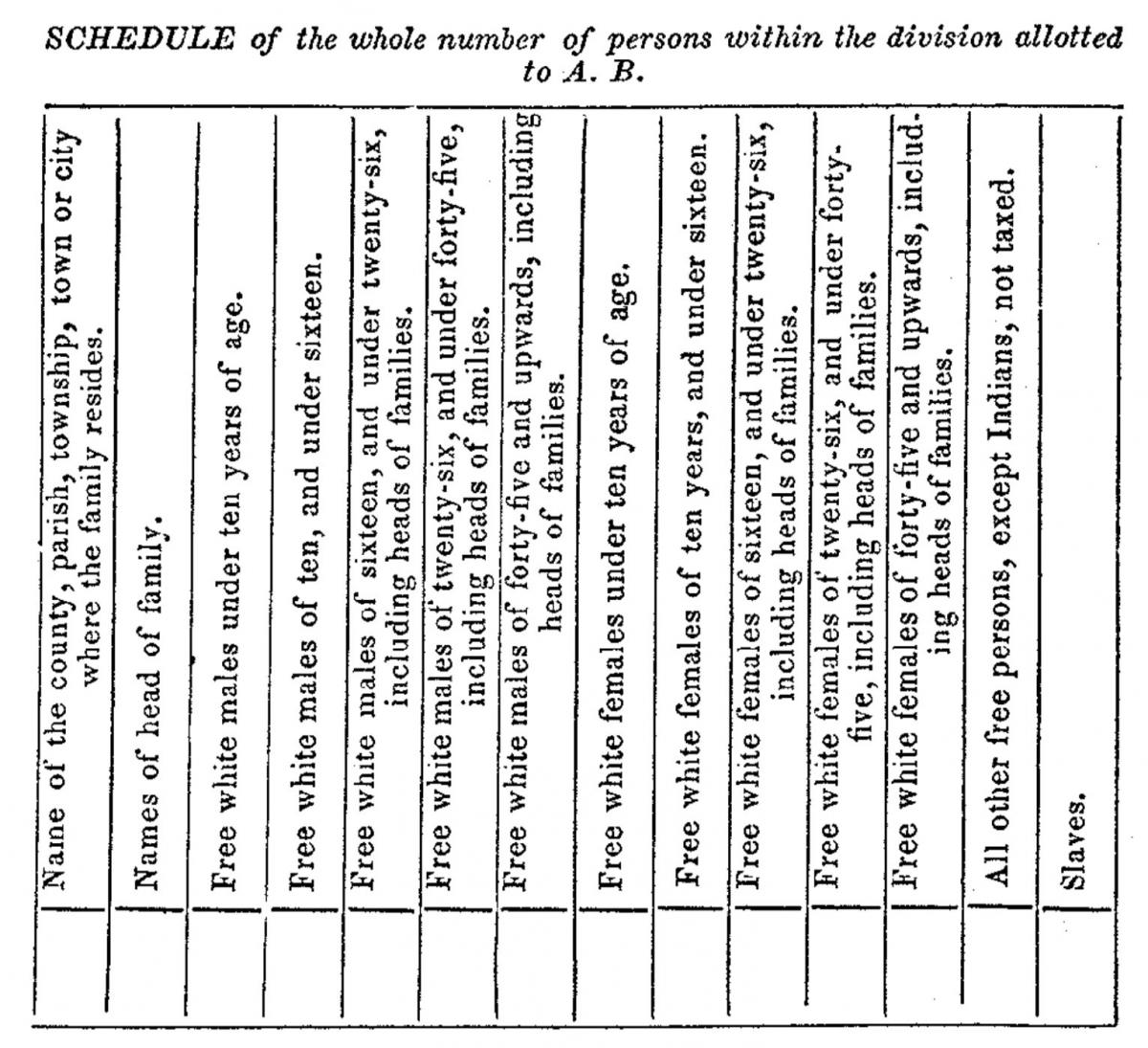 Are some 1810 census records missing?

Yes.  There are no schedules for the District of Columbia, Georgia, Illinois Territory, Indiana Territory, Michigan Territory, Mississippi, New Jersey, Ohio, and most of Tennessee.  Under the provisions of the 1810 census act, only numerical population totals were forwarded by the U.S. Marshals and Secretaries of the territories to the Secretary of State.  From 1790 to 1820, the original population schedules were to be deposited with the clerks of district courts (or superior courts in the territories), "who were to receive and carefully preserve the same."  On May 28, 1830, a Congressional resolution (4 Statutes at Large 430), directed the clerks of the district courts to forward the population schedules for the first four censuses to the Secretary of State.  It is known that the 1790 schedules for Rhode Island were forwarded to Washington on June 22, 1830, as a result of the May 28 resolution.  Presumably other extant population schedules, 1790-1820, were forwarded at about the same time, but no documentation of such action has been found.  It is possible that individual census pages for other locations were lost between 1830 and when they were bound in volumes in the early 1900s.

Where can I see the original 1810 census schedules?