Pictures of the Revolutionary War 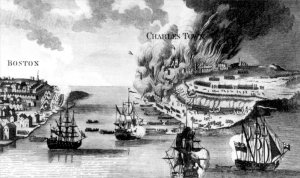 The selected pictures listed below are among the audiovisual holdings of the National Archives that relate to the American Revolution. They are photographic copies of works of art. The dates and mediums of the originals and the names of the artists are given wherever it has been possible to determine them.

At the end of this leaflet, there are instructions for ordering complete sets of slides for all photographs listed in the Select Audiovisual Records leaflets. To order individual prints, negatives. or slides, write to the Still Picture Branch (NNSP) for current price lists. Many pictures related to the American Revolution are not listed in this leaflet. Separate inquiries about them should be as specific as possible listing names, dates, places, events, and other details.

Charlotte A. Palmer researched, selected, and arranged the material for this publication.

A Declaration of Determination, 1776

23. Reading the Declaration of Independence from the east balcony of the State House in Boston. 1776. Illustration. 148-GW-ll4I. (revolutionary_war_023.jpg)

26. An east prospect of the city of Philadelphia, taken by George Heap from the Jersey shore, under thedirection of Nicholas Scull, surveyor general of the province of Pennsylvania. Engraved and published according to an act of Parliament by T. Jeffreys. near Charing Cross, 1768. 208-LU-25F-14. (revolutionary_war_026.jpg)

33. Surrender of the Hessian troops to General Washington after the Battle of Trenton. Lithograph by Henry Hoff, 1850. 148-GW-332. (revolutionary_war_033.jpg)

39. Encounter between Capt. Allan McLane and a British dragoon at Frankfort, near Philadelphia. Painting by James Peale. 111-SC-91311. (revolutionary_war_039.jpg)

45. Molly Pitcher at the Battle of Monmouth. Engraving by J.C. Armytage from painting by Alonzo Chappel. 148-GW-923. (revolutionary_war_045.jpg)

47. Clark's march against Vincennes, across the Wabash River. through wilderness and flood. Painting by Ezra Winter. 66-G-5-1O6. (revolutionary_war_047.jpg)

53. Col. William Augustine Washington at the Battle of Cowpens. Drawn and engraved for Graham's Magazine by S.H. Gimber. 148-GW-390. (revolutionary_war_053.jpg)

60. The Bostonians paying the exciseman, or tarring and feathering. Cartoon in mezzotint, published by Sayer and Bennett, London, 1774. 148-GW-436. (revolutionary_war_060.jpg)

64. The left bank of the Hudson River 3 miles above Still Water, upon which the army under the command of Lieutenant General Burgoyne took post on Sept. 20, 1777. (Showing General Frazer's funeral.) Engraving by Barlow; published by William Lane, London, 1789. 148-GW-442. (revolutionary_war_064.jpg)

69. Washington's farewell to his officers. Engraving by Phillibrown from painting by Alonzo Chappel. 148-GW-179. (revolutionary_war_069.jpg)

Portraits of British Leaders and Allies

Portraits of Colonial Traitors and Tories

There are no Use Restrictions for this photo. It is in the public domain.

If you want to use an image from NARA's holdings in your publication or product, please see our Publication of Photographs page.