The U.S. Court of Claims ruled in favor of the Eastern Cherokee Tribe's claim against the U.S. on May 18, 1905. This resulted in the appropriation of $1 million to the Tribe’s eligible individuals and families. Interior Department employee Guion Miller created a list using several rolls and applications to verify tribal enrollment for the distribution of funds.

To be approved for funds the individual must:

Order a photocopy of the original documents.

Census Rolls related to the Eastern Band of Cherokee Indians are are available on Microfilm M1773, Eastern Cherokee Census Rolls, 1835-1884.

Check the National Archives microfilm catalog to identify the nearest facility with this publication.

More information about resources for researching the Eastern Band of Cherokee

Important facts about this roll: 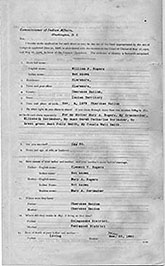