The following item relating to Lyndon B. Johnson is missing from the National Archives

This ring was given to President Johnson by the Coast Guard Academy Class of 1964. It is a 14k gold ring with a yellow sapphire setting. It has a bas-relief ship on one side and crest on the other with the engraving "LBJ" inside the ring. 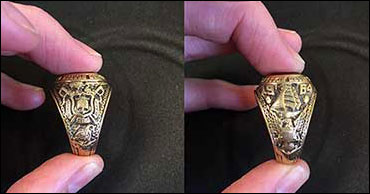 Photographs of ring were provided by the Coast Guard Alumni Association and shows what a typical Coast Guard ring of the class of 1964 would look like.