Message of President Abraham Lincoln Nominating Ulysses S. Grant to Be Lieutenant General of the Army

The secession of eleven Southern states in 1861 plunged the nation into Civil War pitting the Confederate states against the Union. Nearly three years later the war raged on with no end in sight. President Abraham Lincoln and Congress, frustrated by the failures of their military leaders, needed to find a commander who could lead the Union to victory. 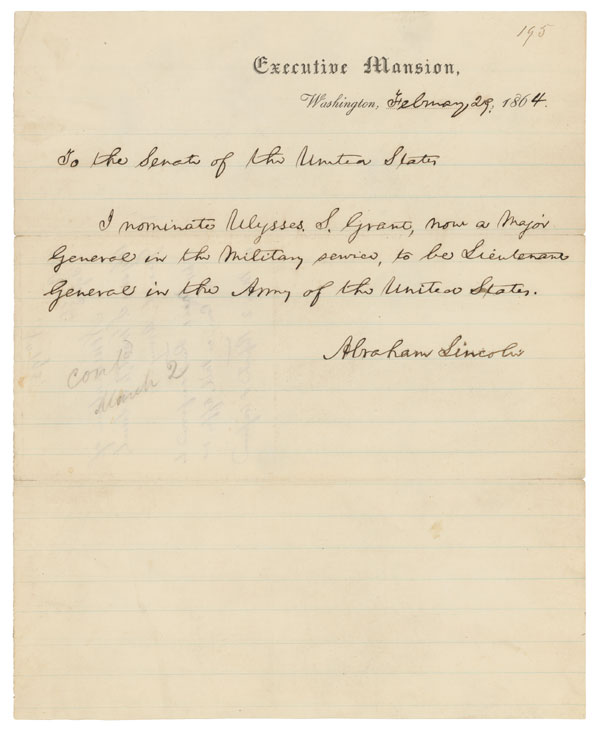 Message of President Abraham Lincoln Nominating Ulysses S. Grant to Be Lieutenant General of the Army, February 29, 1864; Records of the U.S. Senate, RG 46.

Major General Ulysses S. Grant had recently gained national attention with a series of victories at Vicksburg in May 1863 and Chattanooga in November 1863. On December 14, 1863, Representative Elihu B. Washburne of Illinois introduced H.R. 26, a bill which revived the rank of Lieutenant General—the highest rank in the Army of the United States. The bill authorized the President "to appoint, by and with the advice and consent of the senate, a lieutenant-general, to be selected among those officers in the military service of the United States, not below the grade of major general, most distinguished for courage, skill, and ability...."

The bill passed both houses of Congress in February 1864 and Lincoln signed it into law on February 29, 1864. That same day he sent the Senate his nomination of Grant to be Lieutenant General of the Army. Grant's nomination was confirmed by the Senate on March 2, 1864. Only two men, George Washington and Winfield Scott, had held the rank of Lieutenant General before Grant, and Scott's was a brevet (honorary) appointment.