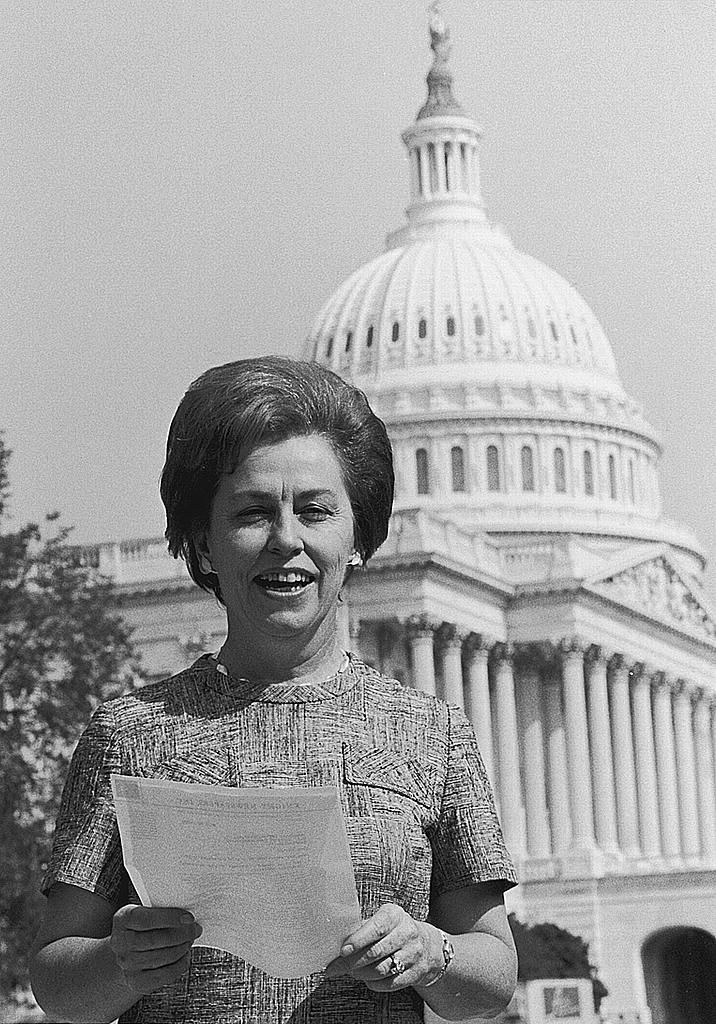 Martha Griffiths (D-MI) was a member of the United States House of Representatives from 1955-1974. She was the first woman to serve on the powerful House Committee on Ways and Means and was instrumental in getting the prohibition of sex discrimination added to the landmark Civil Rights Act of 1964. Griffiths is also known for resurrecting the Equal Rights Amendment (ERA).

The ERA was a proposed amendment to the U.S. Constitution that guaranteed equal rights under the law for Americans regardless of their sex. The ERA was first drafted in 1923 by suffragist Alice Paul. Following the enactment of the Nineteenth Amendment granting women the right to vote, Paul believed the ERA to be the next step in guaranteeing equal justice to all citizens.

From 1923 to 1970, some form of the ERA was introduced in every session of Congress. But, nearly every time that the ERA was introduced, it was held up in committee. In 1970, Griffiths filed a discharge petition to demand that the ERA be heard by the full House. A discharge petition, which requires the signatures of a majority of House members, forces proposed legislation out of committee so that it may be considered by the whole House of Representatives. Following the success of Griffiths's discharge petition, the ERA was passed by the House. However, the Senate attempted to add provisions exempting women from the draft, which effectively killed the chances of the ERA passing that session.

After some changes to the wording of the amendment, Griffiths re-introduced the ERA in the 92nd Congress as HJ Res. 208. After months of debate, hearings and House Judiciary Committee proposed changes, the ERA, as introduced by Griffiths, was approved by the House on October 12, 1971. The Senate approved an identical version on March 22, 1972, sending the ERA to the states with a seven-year deadline for ratification. In 1978, with the seven-year deadline fast approaching, and the ERA lacking the required number of state ratifications, Congress extended the time limit to June 30, 1982. However, by the time the extended deadline arrived, the ERA had only been ratified by 35 states - three states short of the three-fourths required for ratification of constitutional amendments.

Controversy surrounding the Equal Rights Amendment persists today. Despite failing to garner support from enough states by the deadline, three additional states have ratified the ERA in recent years, putting the status of the amendment in question. In January 2020, the Department of Justice issued its opinion, concluding “that Congress had the constitutional authority to impose a deadline on the ratification of the ERA and, because that deadline has expired, the ERA Resolution is no longer pending before the States.” Nearly a century after it was first introduced in Congress, the Equal Rights Amendment remains unratified. 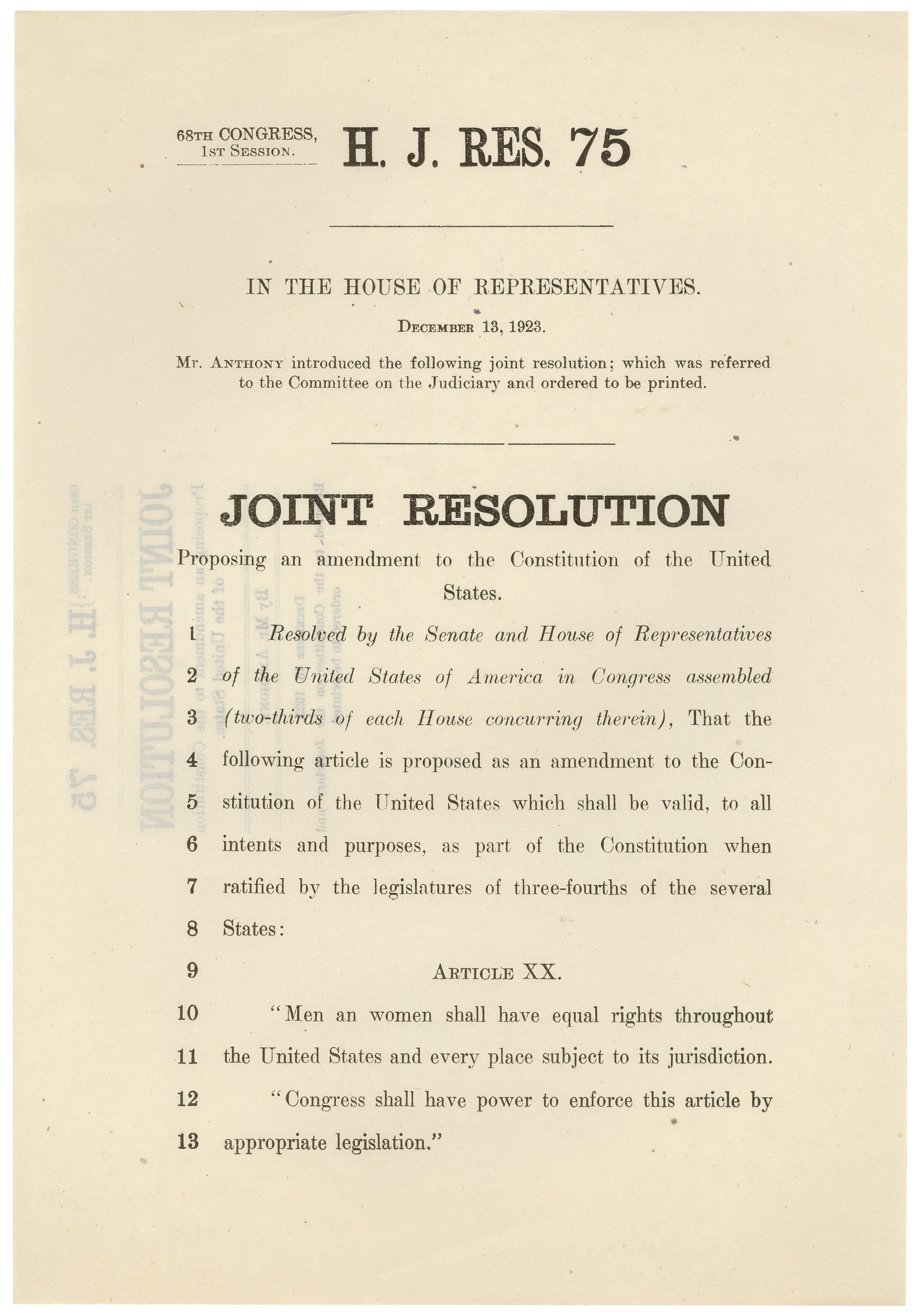 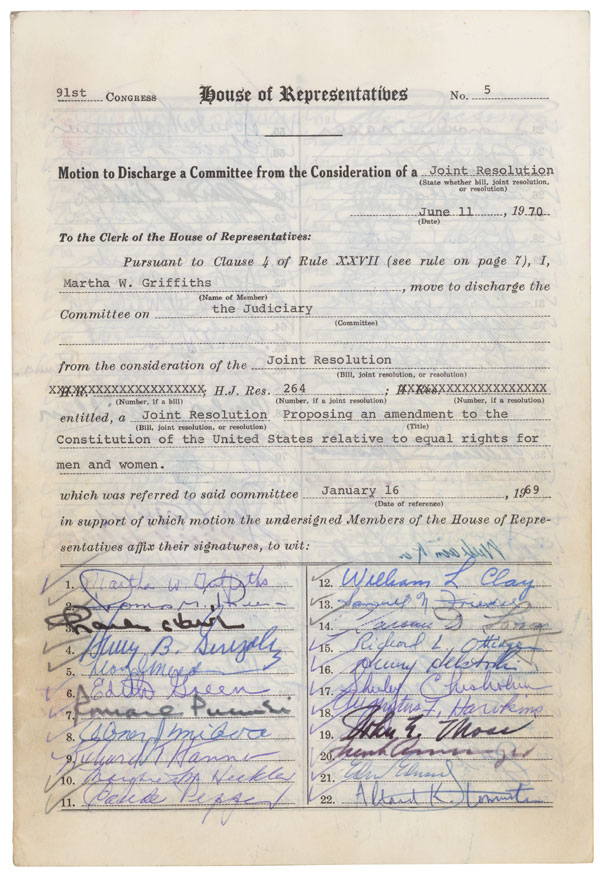 On January 26, 1971, H.J. Res 208 was referred to the House Committee on the Judiciary. The Committee added two amendments, but when the House considered the ERA on October 12, 1971, it rejected the Committee's changes. See the failed changes to the amendment in the:
House Judiciary Committee's report, July 14, 1971.(7.28 MB)