President Ronald Reagan's Nomination of Sandra Day O'Connor to be Associate Justice of the Supreme Court of the United States, August 19, 1981 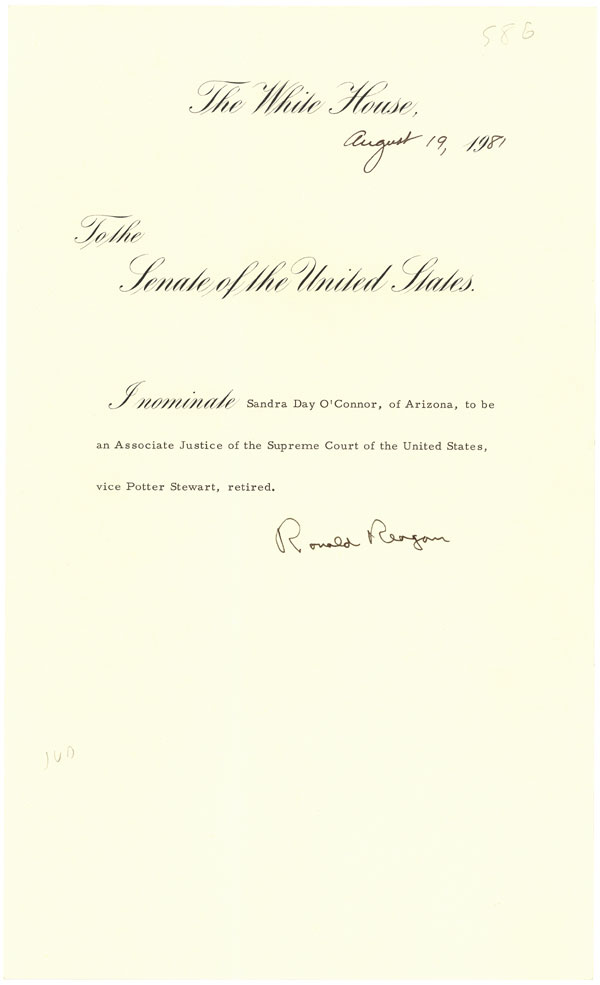 Sandra Day O'Connor was nominated to the Supreme Court by President Reagan on August 19, 1981, thus fulfilling his 1980 campaign promise to appoint the first woman to the highest court in the United States. At the time of her nomination, the fifty-one year old O'Connor was a judge in the Arizona Court of Appeals and had a distinguished career to her credit. She had served as Arizona's Assistant Attorney General in the Arizona Senate, where she was the first female state Senate majority leader in the country, and as a judge of the Maricopa County Superior Court.

O'Connor's nomination illustrates how the Executive, Legislative and Judicial branches function together. As the document shows, President Reagan nominated her to replace retiring Justice Potter Stewart. The nomination then went to the Senate Judiciary Committee, which conducted hearings to evaluate her qualifications. While the Judiciary Committee was impressed with her knowledge and intelligence, O'Connor's nomination was also supported by prominent Senator Barry Goldwater of Arizona, and Supreme Court Justice William Rehnquist. After the hearings were completed, the full Senate voted to confirm O'Connor on September 21, 1981 by a vote of 99-0.

O'Connor went on to serve on the Supreme Court for a quarter century, where she had a major influence on the court's decisions. As a moderate, she often provided the deciding vote on many of the court's cases. She also helped inspire a generation of women to pursue careers in law—when O'Connor was appointed, thirty-six percent of law school students were women; by the time she retired from the court in 2006 that percentage had risen to forty-eight percent.