Following the U.S. Civil War, the end of slavery raised more questions than it answered regarding the future of freed women and men - questions that invited constitutional clarification. Proposals for a Fourteenth Amendment to define and protect the rights of black men quickly followed the ratification of the Thirteenth Amendment in late 1865. In December, Robert Dale Owen, woman suffrage ally and former Democratic congressman from Indiana, sent a copy of the proposed wording of the amendment to suffragists Elizabeth Cady Stanton and Susan B. Anthony in New York. The second section of the resolution, which penalized states that did not enfranchise black "males," stood in sharp contrast to the first section, which defined the rights of national citizenship without qualifications.

Stanton and Anthony, recognizing that the opportunity to amend the Constitution can elude whole generations, were determined to include women in any constitutional changes being considered in Congress. The two organized a small group of women's rights advocates and former abolitionists to launch a campaign for "universal suffrage" - unrestricted voting rights for all male and female citizens. This campaign marks the first national petition drive that featured woman suffrage among its demands.

On January 29, 1866, Congressman Thaddeus Stevens, leader of the Radical Republicans in the House, presented one of the first of several hundred petitions for universal suffrage on the floor of the House of Representatives. Signers of this petition included Stanton, Anthony, and members of the former Women's Loyal National League, Ernestine Rose, Lucy Stone, and Antoinette Brown Blackwell. This exceptional combination of signatures represents some of the period's foremost advocates for suffrage and abolition. 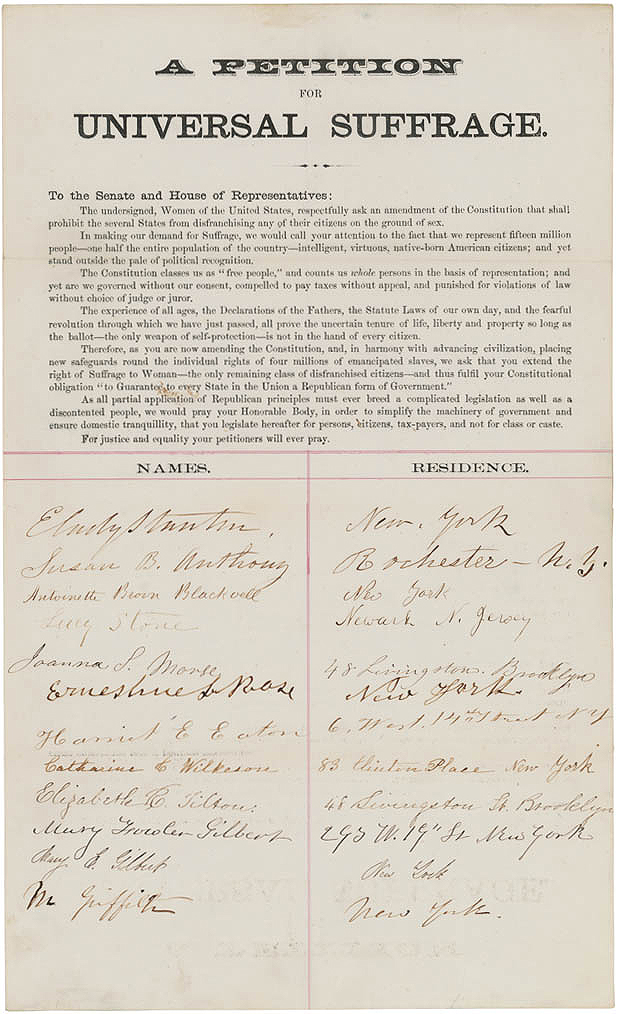 Enlarge
Petition for Universal Suffrage Signed by Elizabeth Cady Stanton, Susan B. Anthony and others. Records of the U.S. House of Representatives