Archivist of the United States David S. Ferriero Reflects on His Tenure Upon Retirement

WASHINGTON, April 29, 2022 — After leading the National Archives and Records Administration (NARA) for 12 years, Archivist of the United States David S. Ferriero will retire this week.

The head of the agency reflected on his time at the agency in a recent interview with National Archives News.

The interview from April 22, 2022, has been edited here for length and clarity.

Archivist of the United States David S. Ferriero during an interview in the Archivist's Reception Room at the National Archives Building.

Confirmed in late 2009 during President Barack Obama’s first term, Ferriero joined the National Archives after a decades-long career leading the libraries of the Massachusetts Institute of Technology and Duke University. He left his position as head of the New York Public Library system to accept the appointment at NARA.

Ferriero has said he initially wasn’t sure about becoming the nation’s top archivist, but the Obama administration’s conviction that the National Archives had an important role to play in the Open Government Initiative tipped the scale in terms of what he felt he could bring to the organization.

That launched Ferriero on a journey as head of NARA through three Presidential elections, multiple major news events, and a protracted pandemic that required an overhaul in how the agency’s 44 facilities manage the records of the federal government while keeping employees safe.

Ferriero’s last day leading the National Archives will be April 30. The White House has not named its selection for the next Archivist of the United States.

Deputy Archivist of the United States Debra Steidel Wall will serve as acting head of the agency until a new Archivist is confirmed by the U.S. Senate.

The National Archives has accomplished a lot over the last 12 years. What are you most proud of during your tenure?

The attention that electronic records have gotten from the White House on the Hill. The President's executive order on Managing Government Records is the first time that the White House has gotten involved in record keeping since the Truman administration. We were fortunate that President Obama, in his Open Government Initiative, recognized the importance of good record keeping for open government and transparency. And in fact, he used a quote from us in his executive order that the backbone of open government is good records management. We were just dancing in the streets when we got that attention. But that has set the tone for the shift from paper to electronic recordkeeping, which is underway now.

I would [also] point to the work that we've been doing around the Citizen Archivist [project]. On his first day in office, President Obama challenged his senior administration, with comments about how the government doesn't have all the answers, and we need to figure out ways that we can involve the American public in helping us do our work. I took that very seriously and started thinking about how we can engage the American public in helping us.

That resulted in the Citizen Archivist program, where we're having people transcribe records. We've got people all over the world who are helping us transcribe records, tagging records. We've got 43 million photographs, not all of them really described well. People are identifying people and places. So those kinds of activities—involving the public in our work—is another thing I would point to in terms of accomplishments. . . . [And] it's become a model for other institutions; the Library of Congress, the Smithsonian, lots of libraries around the country are providing those kinds of tagging opportunities to involve the public in their work.

Looking back at the trajectory of your tenure here, how have you seen the agency transform?

We've focused a lot on culture. The Employee Viewpoint Surveys every year give us some indication of how people feel about working here. In our transformation work, we put a stake in the ground about making this the best agency in the government—the best place to work—and have worked very hard to ensure that we're listening to our staff and figuring out why people are unhappy. What can we do to improve the quality of the work environment? I'm very pleased to say as I'm leaving, our scores are higher than the government average. We're turned a corner, I hope, on how people feel about doing their work.

You've spoken a bit about what your advice would be for your successor. Do you plan on leaving your successor a letter, or any advice you would like to impart on them?

I would urge the new Archivist to take some time and get to know the organization. Get to know the staff. Don't bring a posse. Understand the strengths and weaknesses of the staff. Get some sense of our history before making any dramatic, heroic changes in the first six months. This is a wonderful staff with lots of talent, and the new Archivist needs to appreciate that.

You have devoted a lot of time to building the cultural programs here at National Archives, and especially working with the National Archives Foundation. What exhibits and public programs during your time stand out in particular? 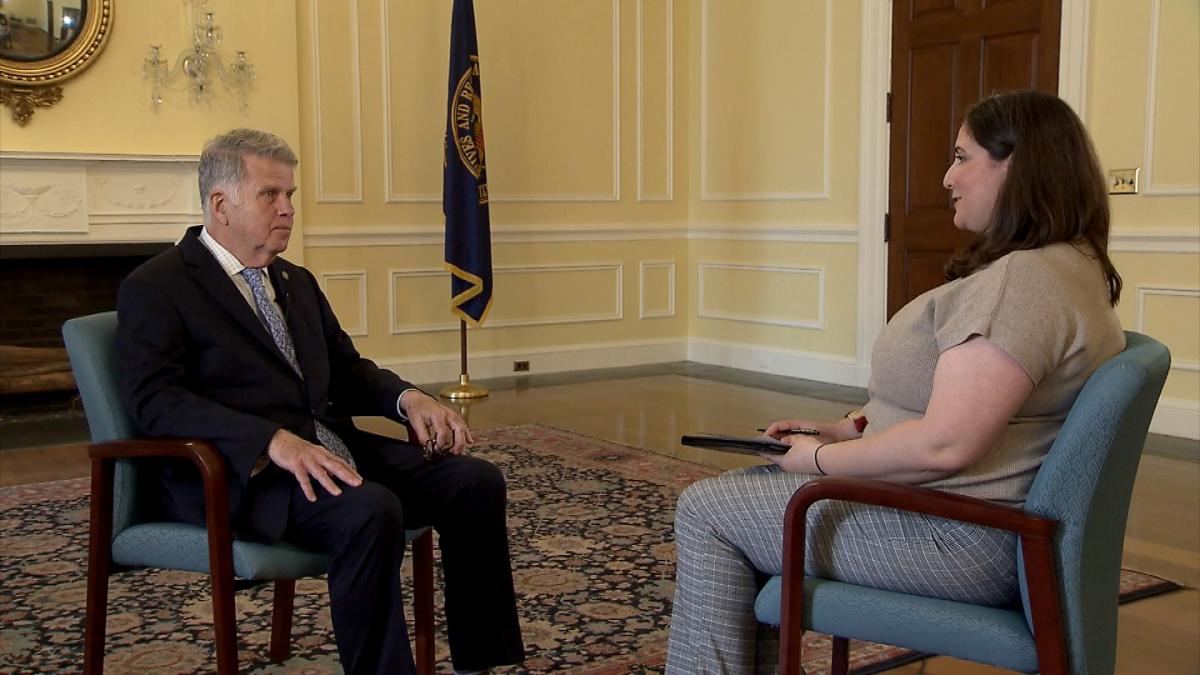 In terms of the exhibits, I think we've been strategic in balancing education versus entertainment. . . .  The ideas for these exhibits come from the staff who are most familiar with records and have ideas about interesting and entertaining ideas for exhibits. The idea to do a food exhibit resonated with me. We have great Department of Agriculture records. Actually, food is represented in multiple agencies in our records. So What's Cooking, Uncle Sam?, the government's role in food, was one of our successful exhibits. And it was made even more successful by our guest curator José Andrés, who fell in love with the National Archives and the idea of an exhibit about how the government has influenced the use of food. And he was so excited that he created a pop-up restaurant across the street to coincide with the exhibit—America Eats, where he was recreating early American recipes. . . .

The natural follow-on to that was Spirited Republic. . . . And that was another one where we were able to mine the records on Prohibition and our fascination with alcohol in another great exhibit.

Then if I had to point to one exhibit that I'm proudest of, I would say it was the Vietnam exhibit that we did (Remembering Vietnam: Twelve Critical Episodes in the Vietnam War). There was a lot of concern on the part of the staff about dealing with a controversial—still controversial after so many years—topic.

We had a curator who understood that tension, understood that the exhibit had to be created from voices on both sides of the war. I think she did a great job involving those voices in video recordings throughout the exhibit. It was very successful. I think we made lots of new friends, educated a lot of people using data that hadn't been used before.

I'm being celebrated at a Vietnam veterans’ association conference in August. I'm getting the Lifetime Achievement Award for not only our service to veterans, but [for] the exhibit. I'm really proud of that.

And you’ve mentioned before about when NARA completed the [Vietnam conflict era] Blue Water deck logs—that was a highlight.

It sure was. Agent Orange. The ability for anyone who was in that area to get the medical treatment that they deserve, based on exposure to Agent Orange, depends on documentation that proves they were exposed. And it was relatively easy for (. . .) the Army and Marines on the ground in Vietnam to prove that. But for those on ships, Coast Guard and Navy, [it is] not so easy to prove that. Our work in digitizing, along with the support of the [Department of Veterans Affairs], the deck logs made it possible to prove that these ships were within Agent Orange range during the war.

Shifting gears a little bit toward the more fun aspects of your time here. You have mentioned that the Rotunda sleepovers and the naturalization ceremonies were highlights at NARA. What made them stand out to you?

The sleepovers were the first [ones], and it was based on my disappointment that at the New York Public Library, the lawyers wouldn't let me do sleepovers. So when I got here and took a look at that Rotunda, I said, “this is a natural. We're going to do sleepovers on the floor of this Rotunda . . .” I think it's safe to say the staff was nervous about being successful in this. We were wildly successful—oversubscribed—on most of them from the very beginning. And they were self-selecting! These kids who are history nerds, who bring with them a history nerd parent or grandparent, and they're just tingling when they're here. . . .

For me, the naturalization ceremonies are another highlight in terms of just pulling together everything that we stand for, everything that we are responsible for, in a ceremony that welcomes anywhere from 75 to 150 new citizens to the country, swearing their oath of allegiance in front of the Charters [the Founding Documents]. It's just a moving experience. And I'm always so impressed with the fact that these folks know more about their rights and responsibilities than if I were to go out on the street and ask the regular American citizen some of those questions about their rights and responsibilities—they wouldn't have the same level of knowledge. So that always reminds me of how much work we have to do to compensate for that. 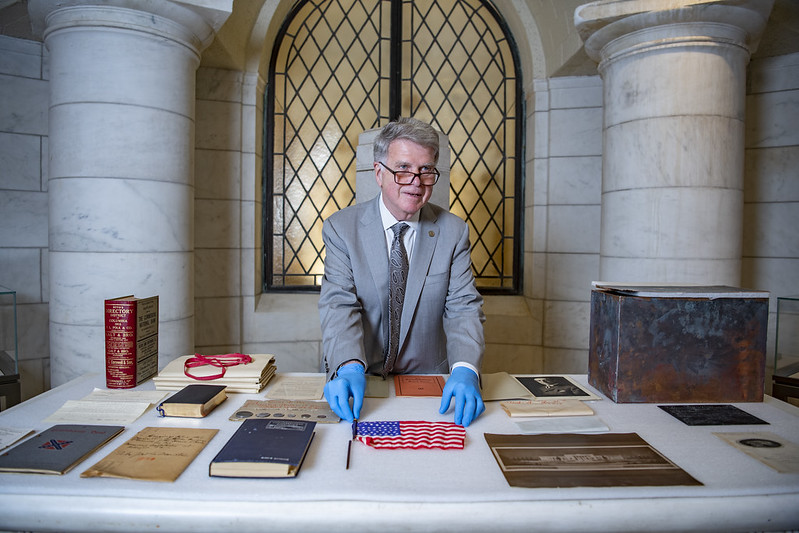 A few years ago, you attended a time capsule opening at Arlington National Cemetery. If you had to leave a time capsule yourself upon leaving the National Archives, what would you put in it?

That's a good question. Since the Charters of Freedom [Founding Documents] have been from the very beginning the center of attention here, I would want copies of them, in the latest electronic form. So that in 100 years, someone could try and figure out how on earth are we going to read this? I would want some history of the organization: the growth, creation of and development of the National Archives. And I would expect that history to go way back to the beginning, when people started talking about the importance of “we have to do something about the public records.” Thomas Jefferson, for instance, saying that.

It would be interesting to engage the staff on deciding what should be in a memory box. When I was invited to come over to Arlington to open that box, I got a sense of the controversy of what was in the box because there were so many groups who thought they were responsible for it. And I think it would be a great activity for the staff who's really devoted to the mission or the agency to contribute to that process. It was similar to the way I think the Bicentennial Memory Box was created; it was open to the public, the public made recommendations. And my favorite item in that was a package of Twinkies. A conservation nightmare, of course, Twinkies.

Is there anything on your desk that you would be willing to leave in there?

I grew up outside of Boston, and every time we went into Boston, my favorite spot to visit was the USS Constitution, Old Ironsides. And I had the opportunity to go out on a turnaround on the ship. As the Archivist, they presented me with a piece of the deck—they had to replace some wood on the eye. If I had to contribute something, I would contribute that piece of history.

I know that you've been hesitant to say what plans you have. Still no plans?

No plans. No commitments. It's one day at a time. I'm not going off to some other job.