WASHINGTON, November 21, 2018 —  The National Archives and Records Administration has begun an effort to conserve and digitize 377 native treaties for inclusion in the agency’s online catalog. The project will add the treaties and supplemental records to the digital catalog, providing worldwide public access to them for the first time. It is made possible thanks to funding from an anonymous donor and support from the National Archives Foundation.

Pamela Wright, Chief Innovation Officer for the National Archives, shared that the agency continues to lead the way in modernizing Federal records management by making more of the nation’s records available virtually. 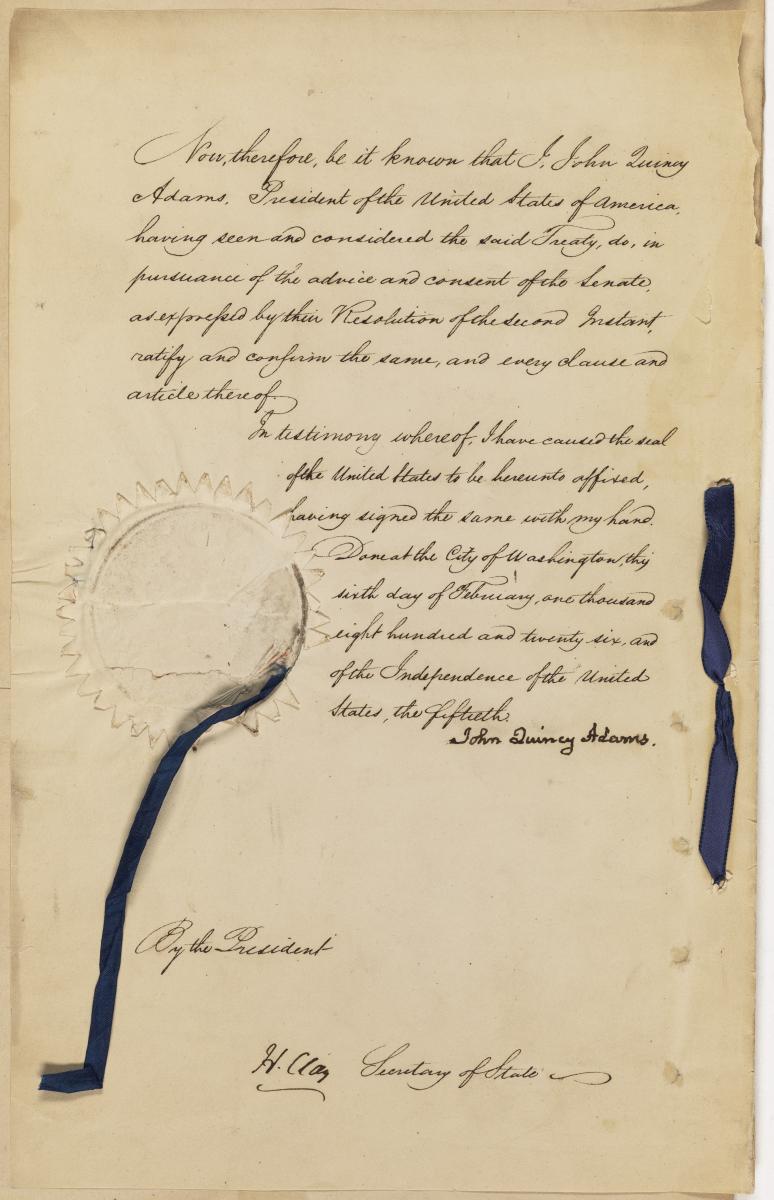 Ratified Indian Treaty 133: Arikara (Ricara) - Arikara Village, July 18, 1825, is one of 377 native treaties being added to the National Archives online catalog as part of a digitization project sponsored by an anonymous donor. View in National Archives Catalog

“The project boldly addresses three of our agency’s strategic goals: making access happen, connecting with customers, and maximizing our value to the nation,” Wright said. “We currently have over 65 million digital records available in the catalog. With over 12 billion textual records in our holdings, our big hairy audacious goal is to have them all available online one day.”

“Our efforts in digitization are an important piece in achieving our strategic goal to Make Access Happen,” Wright added. “Through generous gifts, like this one from an anonymous donor, we are able to expand our digitization and online access efforts to make these public domain records more accessible for everyone to use, from teachers and community groups to museums and filmmakers. Having this content available publicly further complements the National Archives’ existing education efforts around the treaties and other Native American records.”

“Having the digital copies available in the Catalog also supports our work with Citizen Archivists,” Wright continued. “Citizens are encouraged to work with us on transcribing, tagging, or commenting on our digital records. In turn, these enhancements are added back into our search engine so that the public can more easily find records in the Catalog. I encourage you to give it a try: see the Citizen Archivist Dashboard.”

Project Manager Aaron Woo said the anonymous donor was looking for the agency to digitize contents from within the National Archives Building treasure vault in Washington, DC. While the set of Ratified Indian Treaties (377 in all) were not specified per se, Woo said that a team of National Archives executives, archivists, and conservationists chose this project because of the historical importance these documents hold.

“Some National Archives holdings are so historically significant and valuable that they are separated from our normal holdings and stored in vaults to increase security and limit physical access,” Woo said. “Vault materials at our Washington, DC, location are among the most sensitive records in our agency’s collection: these records are not served to the public. Many of these records have not been digitized and are therefore effectively closed to the public. This project allows those records to be shared with the public.”

Ratified Indian Treaty 360: Sioux (Sisseton [Sissiton], Wahpeton [Warpeton]) - Washington, DC, 1867, is one of 377 native treaties being added to the National Archives online catalog as part of a digitization project sponsored by an anonymous donor. View in National Archives Catalog

“Although the focus of this project is the digitization and shared access to the 377 treaties,” Woo added, “we are also scanning other supplemental records as they relate to those treaties in an effort to add contextual information for the public.”

The scanning project also includes accompanying papers to the treaties, the Presidential Proclamations, and the Resolutions of Ratification by Senate.  Supplemental records include Executive Order files with maps and correspondence, as well as Unratified Treaty files that include journals, reports, and related correspondence.

Woo noted that as of the beginning of November 2018, more than 130 documents have already been scanned. To date, more than 300 documents have been assessed and treated through the preservation and conservation process and are waiting in the queue to be scanned. Woo noted the project is on track to meet the completion goal by the end of FY 2020.

The project began with the National Archives conservation team assessing each of the 377 treaties and creating a plan for any treatments required before they can be scanned. Treatments would include ironing out creases, fixing tears, and fixing ribbons on the documents. After conservation, the records are put into a queue of items to be scanned by the Innovation team. Another part of that team then adds in the metadata and other contextual information, and then eventually uploads everything into the National Archives online catalog

“The other major component of the overall project, however, is to engage the public and share this project with as many people as possible,” Woo said. “Our goal is to allow anyone access to the content, not only through the online catalog, but through exhibits where they can experience the documents in person.”

Woo is referring to the recent National Archives–New York City exhibit, “Be It Remembered: Treaties with Native Nations,” as well as the documents on loan to the Smithsonian’s Museum of the Native American Indian (MNAI) “Nation to Nation: Treaties Between the United States and American Indian Nations” exhibit.

“Our understanding was that the donor really wanted us to impact the tribal community and to encourage public awareness of these materials,” Woo said. “We are honoring that request through both of these exhibit opportunities as well as making everything accessible through the online catalog. We hope to share them with as many folks as possible through as many venues as possible. We have additional engagement activities with the tribal communities planned for the next two years.”