WASHINGTON, May 10, 2019 — The National Archives launched its newest exhibit, Rightfully Hers: American Women and the Vote, today at its museum in Washington, DC, as visitors and tourists eagerly awaited the opportunity to see it for the first time. 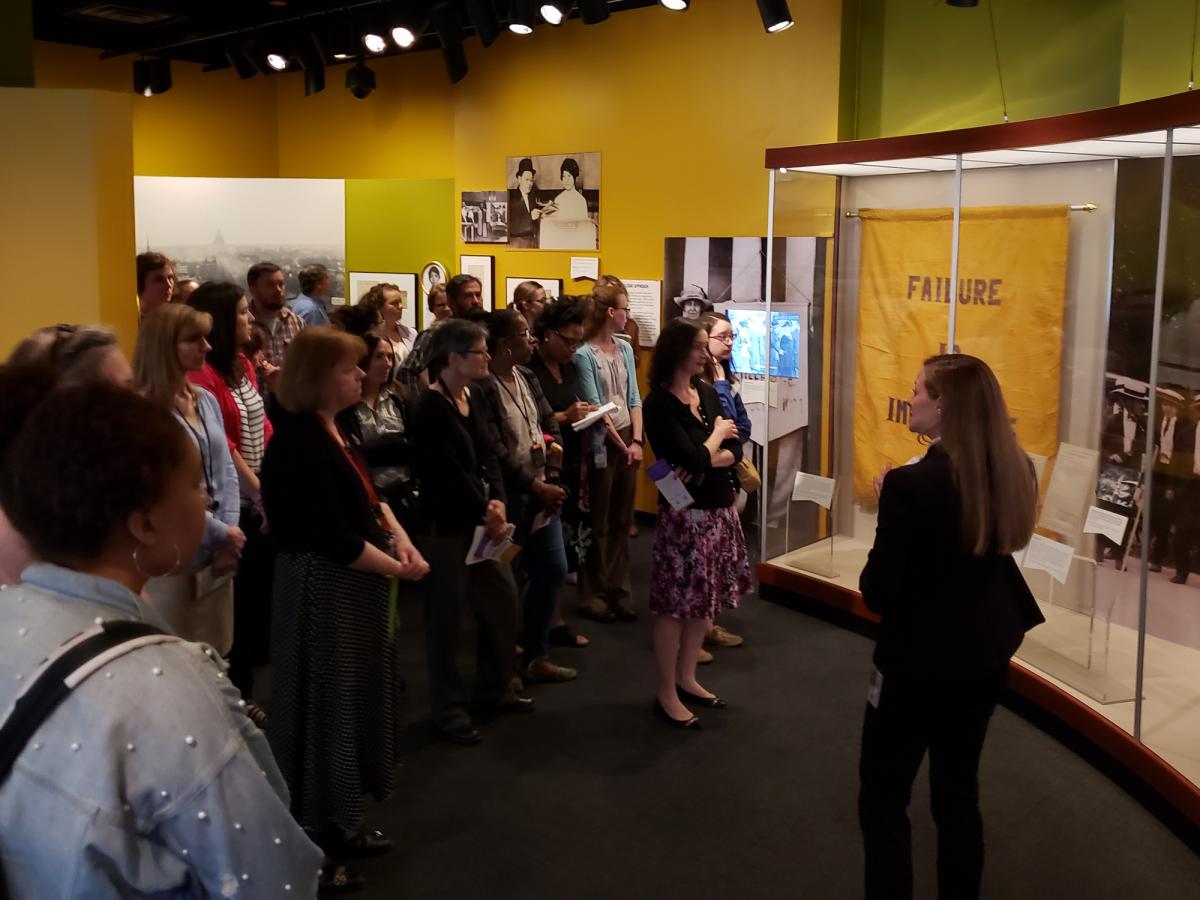 Rightfully Hers tells the story of the 19th Amendment and the American woman’s struggle for voting rights as a critical step towards equal citizenship. The National Archives maintains the original copy of the 19th Amendment among its holdings, and has several public and educational programs planned to commemorate the document’s 100th anniversary later this year. The Rightfully Hers exhibit will be the cornerstone of this celebration.

Archivist of the United States David S. Ferriero explained that while most Americans consider the ability to vote fundamental to the enjoyment of full citizenship, American women were long denied that basic right.

“This exhibit highlights hard-won victories that stemmed from the woman suffrage movement,” Ferriero said. “But it also reminds modern-day citizens of their responsibilities and encourages all to be ‘election ready’ and exercise the right to vote. As home to some of the most important records from the woman suffrage story, the National Archives is uniquely positioned to create a powerful educational experience that relates the fuller story of the struggle to make the vote a reality for all women.”

Deputy Archivist of the United States Debra Steidel Wall, who is also a member of the Women’s Suffrage Centennial Commission, was on hand to welcome staff members for a sneak peek at the exhibit early this morning before it opened to the public.

“Rightfully Hers looks beyond suffrage parades and protests to the often-overlooked story behind the landmark moment in American history,” Wall said.

“This fuller retelling of the struggle for women’s voting rights uses the agency’s records to illustrate the dynamic involvement of American women across the spectrum of race, ethnicity, and class to reveal what it really took to win the vote for one half of the people,” she added. 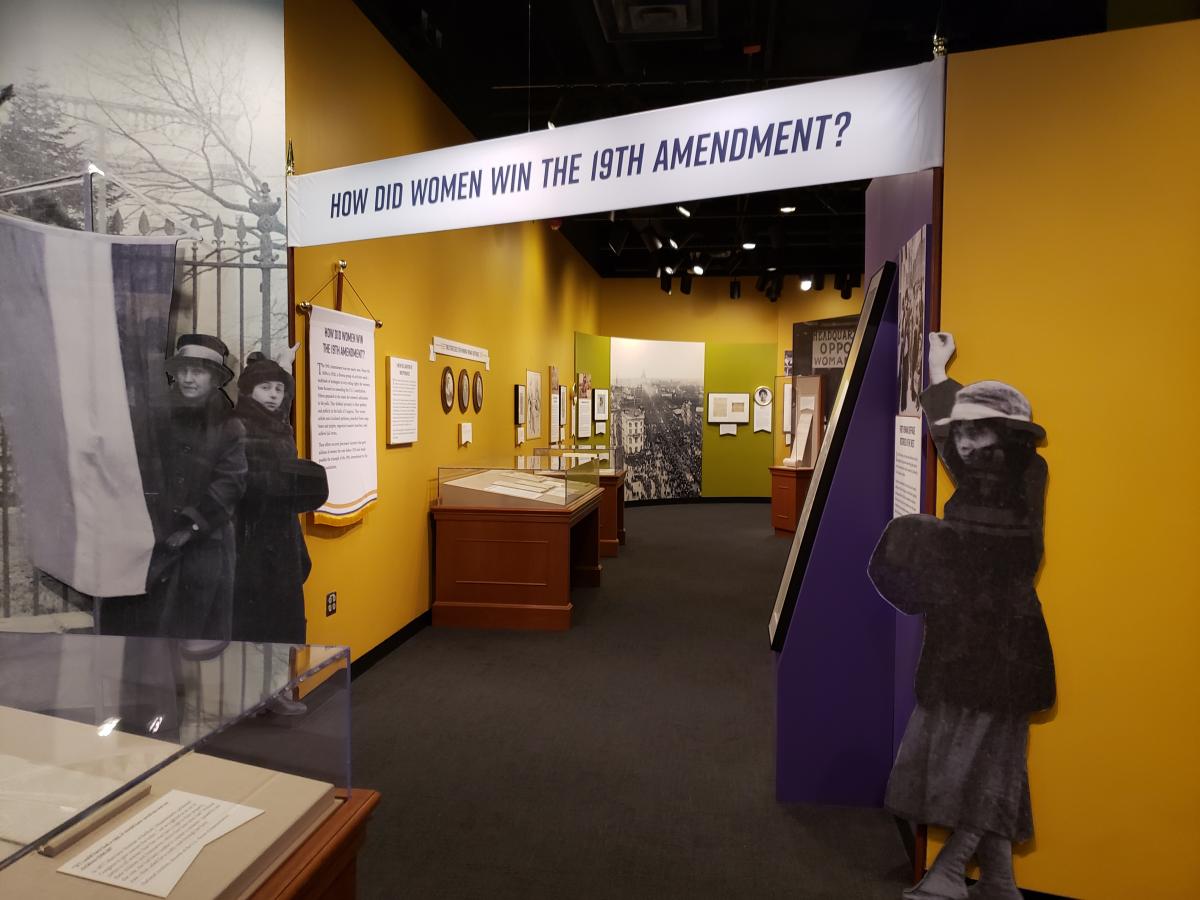 The exhibit, Rightfully Hers: American Women and the Vote, launched at the National Archives in Washington, DC, today. The exhibit tells the story of the 19th Amendment and the American woman’s struggle for voting rights as a critical step towards equal citizenship. (National Archives photo by Kerri Lawrence)

“I am so proud of this exhibit, the work we do, and how the records we hold here at the National Archives reflect America’s ongoing journey to equality for all,” Wall said.

Several years in the planning stages, Rightfully Hers includes more than 90 original records including documents, photographs, artifacts, and audio and video recordings that connect to important historic milestones in the women’s struggle to gain the vote.

Exhibit curator Corrine Porter dedicated the past two years to creating an exhibit that includes the artifacts and documents the agency believed would best tell this story.

”The exhibit includes many stories of influential men and women across generations whose persistence made the triumph of the 19th Amendment possible,” Porter said. Emily Barber, Mabel Lee, Ida B. Wells-Barnett, and Adelia Otero-Warren are among the eminent people featured in the exhibit.

“I absolutely love the way our holdings tell the personal stories of this journey,” Porter said. “I hope this will allow our visitors to better connect with the real-life events, stories, and often relentless struggles so many faced in this fight for equality and the right to vote.”

The exhibit will be open daily from 10 a.m. to 5:30 p.m. in the Lawrence F. O’Brien Gallery at the National Archives Museum in Washington, DC, through January 3, 2021. Admission is free.

In addition, the Rightfully Hers exhibit will be complemented by a traveling exhibit called One Half of the People: Advancing Equality for Women; pop-up exhibits for schools and other venues; an active social media campaign; and robust digital engagement activities on our websites and other platforms.

The National Archives will also host a range of public and education programs, including lectures, panel discussions, and other special events centered on the 19th Amendment and powerful women and their roles in our nation and its history. For a full list of future scheduled events, see the National Archives Calendar of Events.