The North American Journals of Prince Maximilian of Wied, 1832-1834 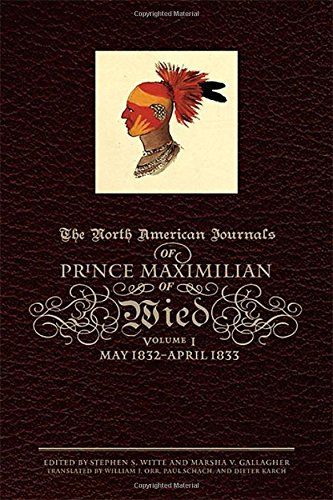 The North American Journals of Prince Maximilian of Wied.

Prince Alexander Philipp Maximilian zu Wied-Neuwied (1782 –1867) was a German explorer, ethnologist and naturalist. He led a pioneering expedition to southeast Brazil between 1815–1817. In 1832 he embarked on another expedition, this time to North America, together with the Swiss painter Karl Bodmer. The North American expedition of German naturalist Prince Maximilian of Wied in 1832–34 was the first scientific exploration of the Missouri River’s upper reaches since the epic journey of Lewis and Clark almost thirty years earlier. This edition draws on the Maximilian-Bodmer Collection at Joslyn Art Museum in Omaha, Nebraska.

The North American Journals offer an incomparable view of the upper Missouri and its Native peoples at a pivotal moment in the history of the American West. This meticulous account, newly translated with extensive modern annotation, faithfully reproduces Maximilian’s 110 drawings and watercolors as well as his own notes, asides, and appendices. Volume I, which covers May 1832 to April 1833, documents Maximilian’s voyage to North America and his first encounters with Indians upon reaching the West. This is an essential resource for nineteenth-century western American history and a work of lasting value.