What Are Some Important Characteristics of Video Formats?

Table of Contents for Video:

Magnetic videotape consists of a base layer, a binding layer, and sometimes a back coat layer.

The base layer functions as a substrate to support the recording as it travels through the playback equipment. A polyester base is by far the most likely, though acetate and PVC may exist in earlier video tape stocks. Polyester may also be referred to as Mylar, PE, or PET, and is durable and chemically stable.

The binding layer supports the magnetic particles used for recording. Manufacturers experimented with various formulations of these binding elements and sometimes consider detailed information about the exact components to be trade secrets. Often it is the binder which first breaks down or changes over time and causes a tape to degrade or become sticky and difficult to play. Additional information.

The back coat layer, if present, is primarily carbon based and is meant to reduce friction and static electricity.

Another interesting technical characteristic of video is track layout. Below is a diagram of U-matic tape and how the different pieces of information (audio, video and timing data) are stored on the tape. 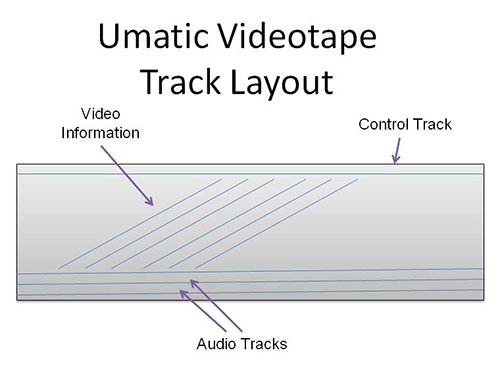 Video information is stored in diagonal lines on the tape; most of the analog video formats (with the exception of 2-inch tape) use this type of recording. While this does not have an effect on how to setup or playback a videotape, this type of track layout better enables features such as shuttle and pause. Audio tracks and timing information are stored along the edges of the tape.

The technical characteristics of an optical disc depend on whether it is pressed or burned. Pressed discs make use of pits and lands in order to store data so that the thin metal recording layer is physically altered by pressing in a manufacturing process. Burned (recordable CD-R, DVD-R, BD-R) discs make use of an organic dye layer in order to record data and are typically less reliable because this dye is more susceptible to degradation over time. Recordable CDs, Blu-Rays, and DVDs have proven to be fairly unstable over time, and are deemed a bad choice for long-term preservation. 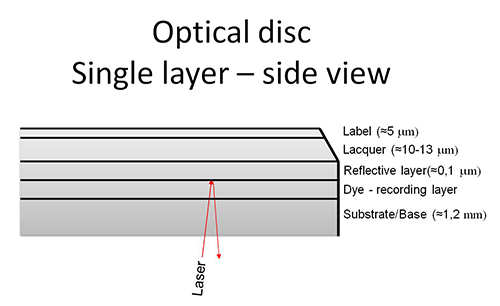 There is a second distinction regarding optical discs and the technical characteristics of the data they contain: if the disc is used simply as a Data DVD, Blu-Ray or CD (without special disc authoring structures) then you may find any type of video file is present. A small Windows Media file to a larger MPEG-2 or AVI file may be stored on the disc. The only restriction is that the file(s) must be smaller than 4.7 gigabytes which is the storage limit for a typical DVD. If the disc has been burned as an authored DVD then a specific folder and file structure will be present. Authored DVDs contain files that store video content (.VOB) as well as menu and backup information (.IFO and .BUP); these are the only file types that will appear on an authored DVD.