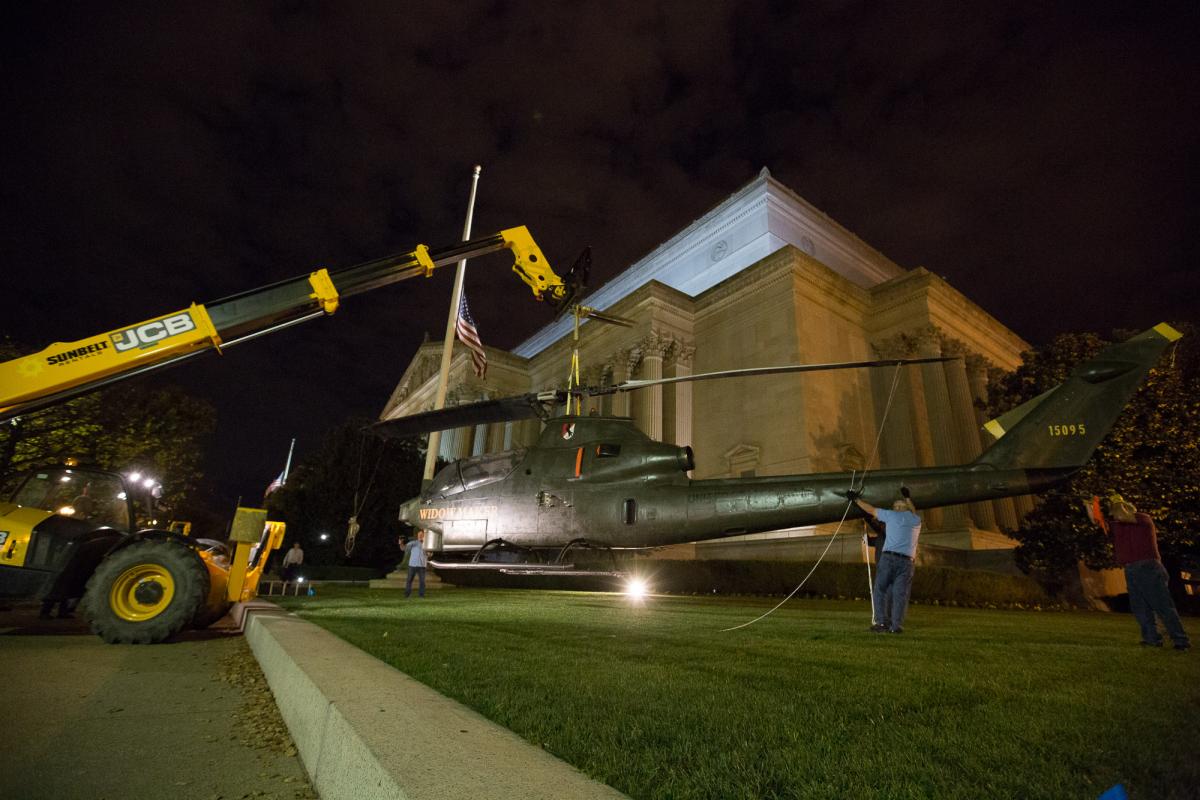 Helicopters are moved off of transport trucks onto the lawn of the National Archives in preparation for the opening weekend of the new exhibit Remembering Vietnam. (National Archives Photo By Jeff Reed)

Vietnam-era helicopters arrived and were installed on the grounds of the National Archives in time for Friday's opening of the new Remembering Vietnam exhibit.

The helicopters, provided by the North Carolina Vietnam Helicopter Pilots Association, arrived after dark November 6, and were offloaded with cranes and moved onto the lawn, where they will remain through opening weekend. The public is invited to tour the aircraft and speak to members of the association who were all pilots of these types of aircraft during the war.

In addition to the helicopter display, the National Archives will host many special programs this fall to mark its first-ever Vietnam War exhibit. Remembering Vietnam officially opens November 10. The exhibit and the events listed below are free and open to the public. Attendees should use the Special Events entrance on Constitution Avenue at 7th Street, NW.  The building is Metro accessible on the Yellow and Green lines, Archives/Navy Memorial/Penn Quarter station. Many of the events will stream live on YouTube.

Special display of helicopters outside the National Archives building!
On-display through Nov. 12
Presented in part by the National Archives Foundation through the generous support of Bell Helicopter.
In partnership with the North Carolina Vietnam Helicopter Pilots Association (who are the custodians of the aircraft), see and learn about three original Vietnam War-era aircrafts:

Six Years in the Hanoi Hilton: An Extraordinary Story of Courage and Survival in Vietnam
Friday, November 10, at noon

In 1967, U.S. Air Force fighter pilot James Shively was shot down over North Vietnam. After ejecting from his aircraft, he was captured by the North Vietnamese Army and spent the next six years enduring brutal treatment at the hands of the enemy in Hanoi prison camps. Written by Shively’s stepdaughter Amy Hawk, this book is a riveting portrayal of life as an American prisoner of war trapped on the other side of the world. A book signing will follow the program, which will stream live on YouTube.

Vietnam veteran SGM Donna Lowery will discuss the participation of American military women (non-nurses) during the Vietnam War. This little-known group of an estimated 1,000 women from the Army, Marine Corps, Navy, and Air Force left its mark in Vietnam from 1962 to 1973. They served in a myriad of duties from intelligence analysts, flight controllers, clerk-typists, translators, physical therapists, dietitians and communications specialists among many others. A book signing will follow the program, which will stream live on YouTube.

In conjunction with this weekend’s display of Vietnam War-era helicopters on the National Archives grounds, we present a discussion program with members of the North Carolina Vietnam Helicopter Pilots Association. The program will stream live on YouTube.

See Vietnam Through the Eyes of a Child and Her Author
Saturday, November 11, 11 a.m.

Bring the family and join award winning author Frances O’Roark Dowell to explore her book Shooting the Moon, the story of 12 year old Jamie, whose brother enlists in the army and is sent to Vietnam.  Learn how the author researched what life was like in an American military family during this time and how she brought this story to life.  A book signing will follow the program, which will stream live on YouTube.

Based on the book We Were Soldiers Once… And Young by Lieutenant General (Ret.) Hal Moore and reporter Joseph L. Galloway, this 2002 film depicts the true story of the first major battle between the United States and North Vietnamese forces.  Stars Mel Gibson and Madeleine Stowe.  Directed by Randall Wallace.  The screening will be introduced by Joseph Galloway.  (139 minutes, rated R for violence and language)

Enduring Vietnam: An American Generation and Its War
Tuesday, November 14, at noon

The Vietnam War is largely recalled as a mistake, and the veterans of that war remain largely anonymous figures. Through Enduring Vietnam, professor James Wright recounts the experiences of the young Americans who fought in Vietnam and of the families who grieved those who did not return. The book depicts the cruelty of this war, and its quiet acts of courage. A book signing will follow the program. The program will stream live on YouTube.

What lessons have we learned -- and must we learn -- from the Vietnam War? How does the war continue to reverberate in our politics today? A panel comprised of a bipartisan group of Former Members of Congress as well as experts on the Vietnam War will examine the tumultuous Vietnam era that divided our nation and set the stage for the political conflicts in the decades since. Many of the issues that shaped our nation in the 1960s and 1970s to this day play a leading role in our national dialogue: race relations, culture wars, how we treat veterans, and the erosion of trust in government. Moderating the panel will be CBS Radio News Political Analyst and American University Professor Leonard Steinhorn.  Presented in partnership with the U. S Association of Former Members of Congress  The program will stream live on YouTube.

This page was last reviewed on November 8, 2017.
Contact us with questions or comments.