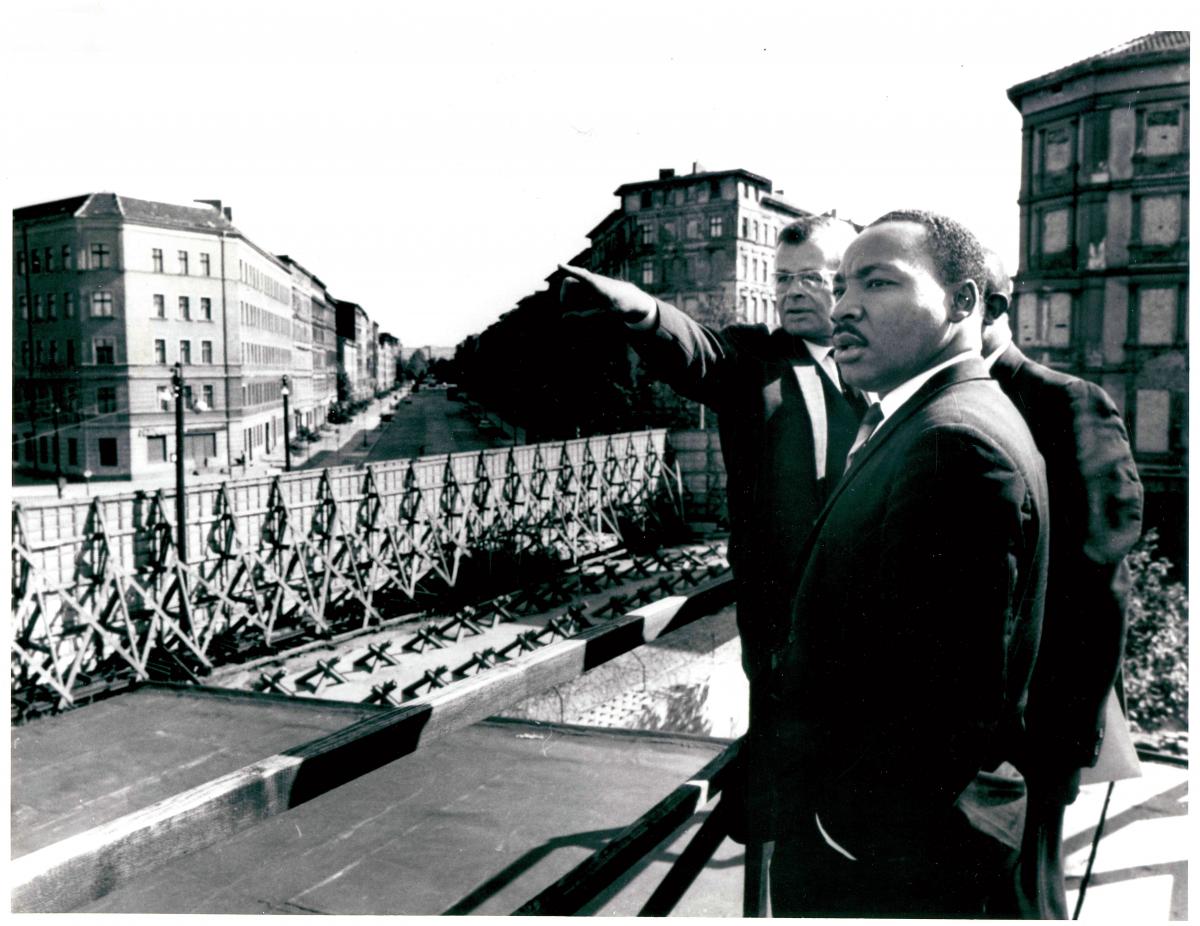 Martin Luther King, Jr. at the Soviet Border of the Berlin Wall, 1964.

Dr. Martin Luther King, Jr. was born in Atlanta, GA on January 15th, 1929. He was one of the most important and influential Civil Rights leaders in the 1950s and 1960s. The cornerstones of his activism were based on non-violence and civil disobedience, both of which were inspired by his Christian faith and the teachings of Mahatma Gandhi.

He rose to prominence as a leader in 1955 during the Montgomery bus boycott when he was selected to take charge to desegregate the bus services. Afterwards he was elected the president of the Southern Christian Leadership Conference (SCLC). From this position, he helped organize many Civil Rights movement actions. The most famous being the 1963 March on Washington for Jobs and Freedom. It was then, on the stairs of the Lincoln Memorial, that Dr. King delivered his famous “I Have a Dream” speech. He also won the Nobel Peace Prize in 1964, and in 1965 helped organize the Selma to Montgomery marches to advocate for Black voting rights.

His influence and importance came with a heavy price. The Federal Bureau of Investigation’s Counter Intelligence Program (COINTELPRO) began surveillance of Dr. King as FBI Director J. Edgar Hoover believed him to be a threat to the nation. Part of the investigation was trying to tie Dr. King to communism. The FBI even went so far as to write him a threatening letter, anonymous at the time. Dr. King believed the letter had implied for him to commit suicide.

In the later 1960s, Martin Luther King Jr. turned his attention to poverty, capitalism, and the war in Vietnam. Dr. King wanted to occupy Washington, D.C. for his Poor People’s Campaign but he unfortunately never got the chance. On April 4th, 1968, at the age of 38, Dr. Martin Luther King Jr. was assassinated in Memphis, Tennessee.

He was posthumously awarded the Presidential Medal of Freedom and the Congressional Gold Medal. In 1986 President Ronald Reagan signed legislation enacting Martin Luther King, Jr. Day, which created a national holiday on the third Monday in January to remember Dr. King on his birthday. His legacy for nonviolent action and civil disobedience still lives on.

Additional Resources from the National Archives

Special Topics: 1968 - A Year of Turmoil and Change