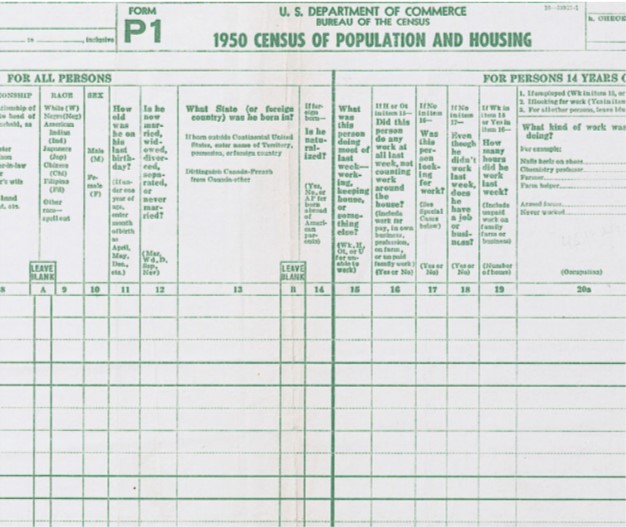 The 1950 Census had 20 questions for all persons, so it was shorter than the 1940 Census, but otherwise, changes were minimal. Additional questions at the bottom of the schedule (Nos. 21-33c) were asked of six persons whose name fell on a highlighted line labeled “Sample.” (There were five versions of the form to vary the sample lines.) The person on the last sample line was also asked additional questions, starting from 34.

In 1940, every person age 14 or over was asked questions about their income in 1939; in 1950, only persons on sample lines who were age 14 or over were asked income questions. In both 1940 and 1950, the respondent could answer income questions by either providing the information to the enumerator or completing a form and mailing it to the Census Bureau in Washington.

The Bureau of the Census made special efforts to ensure that the 1950 census was as complete and accurate as possible. The Bureau improved enumerator training and provided them with detailed enumeration district maps, conducted radio and newspaper advertising campaigns, and set aside specific nights to conduct enumerations of persons in hotels, campgrounds, YMCAs, and other places frequented by travelers and transients. Extra efforts were made to ensure all infants born from January to March 1950 were counted.

Lodging houses, hotels, and similar places usually contained multiple dwelling units and multiple households. The enumerator was instructed that “Each group occupying separate living quarters that meet the definition of a dwelling unit should be assigned a separate serial number” while “roomers who rent sleeping quarters only should be listed with the members of the household’s family.” A dwelling unit was defined as “a group of rooms or a single room, occupied or intended for occupancy as separate living quarters, by a family or other group of persons living together or by a person living alone.” In general, quarters that did “not have separate cooking equipment” or a separate entrance from the landlord’s quarters were to be enumerated as part of the landlord’s household.

A supplemental schedule, Form P8, Indian Reservation Schedule, was used to obtain additional information on Native Americans who resided on reservations. In addition to entering each person’s name as it appeared on the regular schedule, Form P1, 1950 Census of Population and Housing, the enumerator recorded other name(s) by which that person was known, along with his or her tribe, clan, degree of Indian blood, ability to read, write, or speak English or any other language, and participation in any native Indian ceremonies in 1949.

Questions Asked on Form P1, 1950 Census of Population and Housing 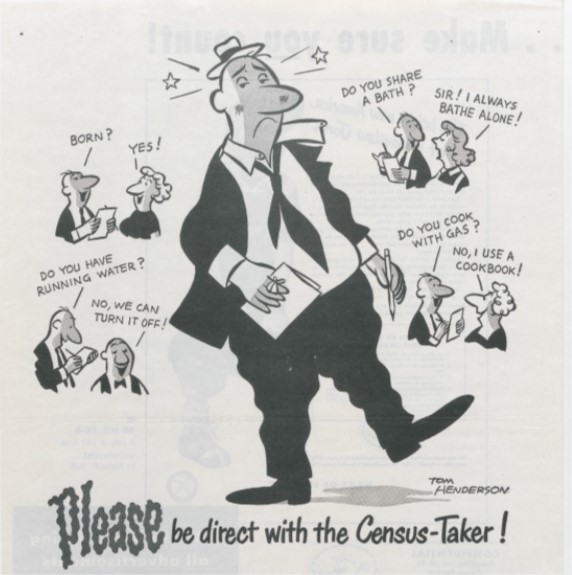 From the Advertising Campaign for the 1950 Census, page 14

Questions for all persons

Questions for persons fourteen years of age and over

Questions for persons on sample lines (six per sheet)

The 1950 census was the last time enumerators personally visited most households with large multi-family census sheets. During the 1960 and later censuses, households received enumeration forms in the mail and mailed them back to the Census Bureau.

In 1950, the Bureau of the Census experimented with self-enumeration and household forms in certain Enumeration Districts (EDs) in Michigan and Ohio. The household forms (P12A, P12B, P12C) asked the same questions as the regular Form P1, 1950 Census of Population and Housing.

Household forms were completed by a household member in Ingham and Livingston Counties, Michigan, and Franklin County, Ohio.