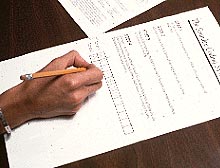 To use the census soundex to locate information about a person, you must know his or her full name and the state or territory in which he or she lived at the time of the census. It is also helpful to know the full name of the head of the household in which the person lived because census takers recorded information under that name.

The soundex is a coded surname (last name) index based on the way a surname sounds rather than the way it is spelled. Surnames that sound the same, but are spelled differently, like SMITH and SMYTH, have the same code and are filed together. The soundex coding system was developed so that you can find a surname even though it may have been recorded under various spellings.

To search for a particular surname, you must first work out its code.

Every soundex code consists of a letter and three numbers, such as W-252. The letter is always the first letter of the surname. The numbers are assigned to the remaining letters of the surname according to the soundex guide shown below. Zeroes are added at the end if necessary to produce a four-character code. Additional letters are disregarded. Examples: