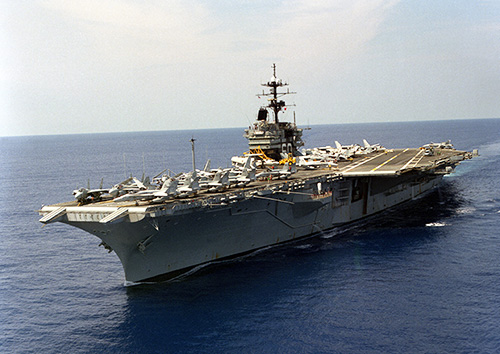 For the period 1960-1964, many logs were produced in a revised format, with slightly truncated columnar data immediately preceding the remarks instead of on a separate page. Columnar data during this period includes wind direction and speed, barometric pressure, air and water temperature, general state of clouds, weather and waves, latitude and longitude, number of miles steamed, and fuel consumption.

Deck log remarks pages changed format again in 1965, with spaces for filling out the ship's longitude and latitude at three different times during the day appearing at the top of each day's remarks page, often these were completed in part or not completed at all. The columnar pages were also discontinued as part of the updates to format and data capture.

During the course of the 1960s and early 1970s, the frequency of individual personnel being identified in deck logs for any reason (whether reporting aboard, transferring to another command, sustaining wounds, or being subject to disciplinary action) steadily declined. References to individuals in logs during this period continued to be included, however, the frequency and amount of data recorded was generally less.

The format slowly changed again in the early 1970s, at first with amphibious assault ships and aircraft carriers, then other ships. The top section of each log remarks page contains spaces for filling in the ship's name, type and hull number; the date and time zone of entries; the ship's location; and the security classification of the data entered on the page. Most logs usually contain spaces below these for filling out the ship's longitude and latitude at three different times during the day, but these often were not completed.

Data in this version of the deck logs was entered in six different columns. The five columns on the left-hand side of the page recorded the time of the entry; the abbreviations of any orders issued requiring an entry; and changes in course, speed or depth resulting from that order. (Only submarines recorded information in the depth column.) Remarks were entered into the sixth column, but unlike earlier logs, which had their information entered in four-hour blocks, in these logs each entry was written on a new line with a blank line between entries (although a single entry may take up several consecutive lines). A log of one day's events could often spread over several pages while the ship was underway. As a result, individual deck logs became much more voluminous, sometimes 200 pages or more per month. By 1974, all ships had adopted this format.

What are people asking about Navy Deck Logs on History Hub?