Below is an organizational chart of the Office of Strategic Services. Click on an office name for more information on that individual branch. 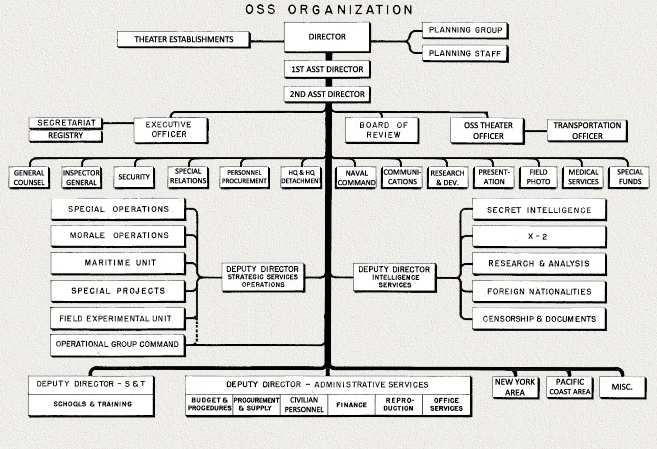 I: Office of the Director

The Office of the Director of the OSS had command responsibilities for the agency as a whole; including assistant directors, special assistants and representatives, and all offices and branches

This unit was the channel for submitting programs, plans, and projects to the Director and served as his reports and editorial staff. It was responsible for activities of the Registry, which maintained secret control records and files on intelligence and operations.

IB: Office of Research and Development

This office, established on October 17, 1942, had staff responsibility within the OSS for the development of special weapons and equipment required for OSS operations. It was designated as the sole OSS unit for liaison with the Office of Scientific Research and Development (OSRD) and with other government agencies conducting equipment research and development.

This command was established in May 1943 to serve as a liaison office between the OSS and Navy agencies and to handle administrative matters affecting Navy, Marine Corps, and Coast Guard personnel assigned to the OSS.

This branch collected secret intelligence in all parts of the world except the Western Hemisphere. The branch evaluated such intelligence, disseminated it to authorized agencies, and established and maintained direct liaison with Government and Allied intelligence agencies.

The X-2 Branch handled counterintelligence activities in all areas other than the Western Hemisphere. In particular it collected and evaluated counterintelligence information and disseminated it to authorized agencies; directed liaison with appropriate military, naval, and civilian agencies of the United States and Allied governments; and prepared lists of enemies or subversive persons.

This branch was responsible for the accumulation, evaluation, and analysis of political, psychological, sociological, economic, topographic, and military information required for operations or requested by the Joint Chiefs of Staff (JCS), the armed forces, and other authorized government agencies. The branch also prepared studies, maps, charts, and illustrations relating to this material

This Branch maintained contact with various nationality groups in the United States, and analyzed, indexed, and processed information gathered from them for dissemination to planning and operating branches of the OSS, State Department, and other Government agencies.

This Branch supervised radio-intelligence activities; and maintained liaison with the British Radio Security Service, the Federal Communications Commission (FCC), the JCS, the War Communications Board, and the Office of Censorship. The Branch also distributed intelligence obtained from censorship sources to other branches of the OSS.

This Branch was responsible for carrying out sabotage operations in enemy and enemy-occupied countries, for organizing and supporting underground resistance movements, for conducting such operations as were not assigned to other Government agencies and not under the direct control of a theater or area commander of the Army or Navy, and for equipping and training individuals and organizations required for operations.

This Branch tried to incite and foster resistance within enemy or enemy-occupied countries. Its operations were designed to create confusion and division in enemy areas and to undermine enemy morale. The MO Branch disseminated leaflets and documents, instigated and supported fifth column activities, and provided trained personnel and supplies in support of these activities.

The Command aided and directed open resistance groups in carrying out guerilla warfare and in attacking selected targets. Unlike the SO Branch, the Command activated guerillas as military units that operated in uniform, and were not primarily concerned with individual acts of sabotage.

The unit provided maritime training and maritime transportation to the OSS in all areas. The MU also assisted the Office of Research and Development of the OSS in developing special equipment and supplies necessary to carry out maritime operations.

This office was responsible for carrying out special operational assignments and missions approved by the Director.

IV Office of the Deputy Director, Schools and Training

Training functions performed by the Secret Intelligence and Special Operations Branches and by other units of the OSS were centralized on January 3, 1943, in the Schools and Training Branch. The branch was responsible for instruction and training of OSS personnel in the United States and abroad.