Petition from the University of Oklahoma Against the So-Called Hetch Hetchy Bill (H.R. 7207)

In 1913, over a dozen professors from the University of Oklahoma signed this petition, which urged Congress to vote against the Raker Bill, a bill to grant San Francisco the right to dam the Hetch Hetchy Valley. These educators encouraged Congress to consider the interest of the whole country before unnecessarily invading the Valley. The University President, Stratton D. Brooks, was the first to sign the petition, followed by various professors and deans.  Hundreds of university administrators and professors, from such schools as Harvard and Columbia, signed identical petitions that urged Congress to defeat the Raker Bill. 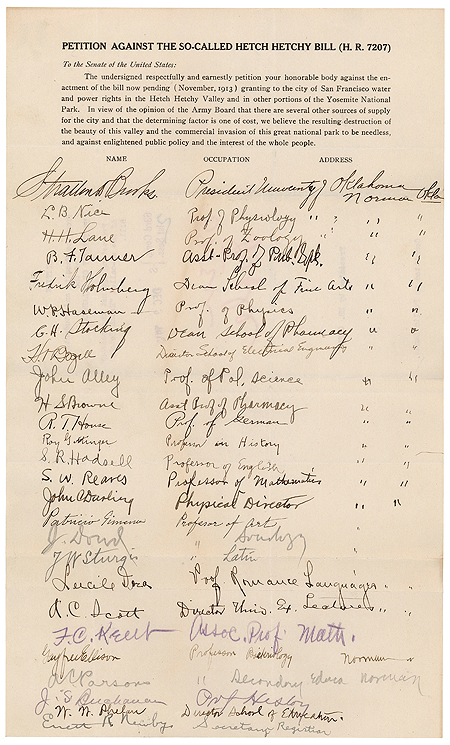 Petition from the University of Oklahoma Against the So-Called Hetch Hetchy Bill (H.R. 7207), December 1913; Petitions and Related Documents That Were Presented, Read, or Tabled (SEN 63A-K8); Records of the U.S. Senate, Record Group 46; NAID 7268075