Records of the Committee on Appropriations

Committee records discussed in this chapter:

3.1 The Constitution of the United States specifies that "All bills for raising revenue shall originate in the House of Representatives, but the Senate may propose or concur with amendments as on other bills." Over the years the prerogative of the House to originate appropriation bills (as well as other types of revenue-raising bills) has been the subject of numerous controversies, but, "while there has been dispute as to the theory, there has been no deviation from the practice that the general appropriation bills (as distinguished from special bills appropriating for single, specific purposes) originate in the House of Representatives."1 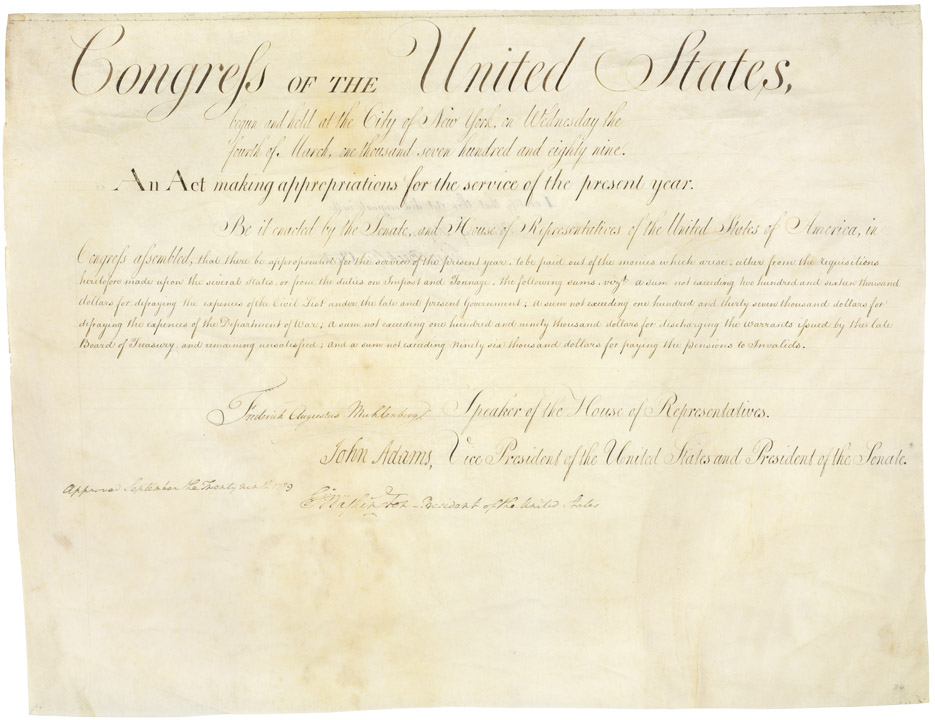 An Act Making Appropriations for the Service of the Present Year [1789], RG 11, Records of the United States Government, National Archives.

3.5 The jurisdiction of the Appropriations Committee since 1865 has been defined as including "appropriation of the revenue for the support of the government" except for the period between 1885 and 1920 when House rules specified the particular appropriation bills for which the committee was responsible.6

3.6 The records of this committee are incomplete and archival (unpublished) documentation is missing entirely for a large part of its history. There are no minute books and docket books in the custody of the National Archives. Minute books from 1865 to the present do exist, but they are in the Appropriations Committee offices in the Capitol Building.

3.7 The petitions and memorials referred to the Appropriations Committee included the types of requests that had been referred to the Ways and Means Committee prior to 1865. The subjects they cover are numerous and varied. Although they reflect the changing interests of constituents, some kinds of requests remained fairly constant. Appeals for special appropriations for the relief of victims of disasters appear regularly among the petitions and memorials as do proposals to increase funding for specific Government programs and prayers for the appropriation of funds to finance special commemorative ceremonies and expositions, to build or improve certain Government buildings, and to provide salary increases for Government employees.

3.8 The petitions received during the early decades of the committee's existence also reflect the wide range of unique activities that the government was asked to support. Among the first petitions received by the new committee was a proposal to appropriate funds for a reward for the apprehension of the assassin John Wilkes Booth (39A-H2.2). Other early petitions include an appeal for appropriations for the removal of the wreck of the steam ship Scotland at Sandy Hook, NJ (39A-H2.2).

3.9 Some petitions received between 1865 and 1881 appeal for relief for destitute colored women and children (46A-H3.5); others demand financial aid for building projects such as the construction of a bridge across the Mississippi River at Rock Island, IL (40A-H1.2) and a signal station on Block Island, RI (44A-H1.8). Petitions for pay increases for Government employees and for the construction of buildings to house post offices and other Government functions appear repeatedly in the records of this period.

3.10 During this period also, demands for Government support for scientific research are evidenced by petitions and memorials requesting funding for such purposes as an Arctic exploring expedition to be led by Captain C. F. Hall (41A-H1.4), the free distribution of agricultural seeds by the government (44A-H1.3), the establishment of a national medical library in Washington, D.C. (44A-H1.5), the development of a scientific method of testing iron and steel (44A-H1.6, 45A-H3.2), the appointment of a committee of entomologists to study the boll weevil (46A-H3.1), and surveys of the Black Hills in Dakota Territory (46A-H3.9).

3.11 The petitions and memorials from the 1880-1900 period generally cover the same types of subjects. Numerous citizens submitted proposals in support of the development of scientific, cultural, and educational enterprises, requesting appropriations for a telegraphic cable between Martha's Vineyard and Nantucket, MA (47A-H3.13); for the Government Hydrographic Office (47A-H3.6, 49A-H3.3, 50A-H2.7) and the National Board of Health; for the control of contagious diseases (47A-H3.7); for education in Alaska (48A-H3.1) and education of the Indians (48A- H3.2); for the purchase of the Rand and Ordway collection of photographic negatives of the Civil War (48A-H3.10); for the organization of a steam transportation section in the National Museum (49A-H3.8); and, for the preservation and publication of the records of the Continental Congress (54A-G3.2).

3.12 During the last two decades of the century petitioners sought funding for the relief of victims of storms, floods, and droughts (48A-H3.12, 49A-H3.11, 50A-H3.5, 52A-H3.6); for payments for damages caused by improvements to the Fox and Wisconsin Rivers in Wisconsin (49A-H3.10); for the payment of a bounty to sugar producers in 1894 (53A-H3.4); for aid to various social service activities (49A-H3.2); the establishment of marine hospitals (48A-H3.4) and construction of a new building for the Government Printing Office (52A-H3.1, 53A-H3.1). Other citizens suggested that the Government support international meetings and exhibitions held in the United States by helping to defray the expenses of such events as the 1887 International Medical Congress (49A-H3.1) and the 1893 Pan American Medical Congress (52A-H3.5), both held in Washington, DC, and by appropriating funds for a Government exhibit at the 1895 Cotton States and International Exposition at Atlanta, GA (53A-H3.2). Some petitioners called for the enforcement of certain laws such as one regulating the sale of oleomargarine (50A-H2.2) and others protested the appropriation of funds for sectarian purposes (54A- H3.3, 55A-H1.2) and the passage of legislation endangering the preservation of forest reserves (55A-H1.1).

3.13 Between 1900 and 1921 citizens looked to the Government to finance scientific investigations to determine the working conditions of women employed in the industries of the United States (59A-H1.2), the extent of pollution of the Great Lakes (62A-H1.5), and the causes of influenza (66A-H2.5). They advocated tuberculosis research (63A-H2.10) and the establishment of a psychophysical laboratory in the Interior Department (57A-H1.2); and demanded protection for the weak in society through enforcement of such legislation as the White Slave Traffic Act (62A-H1.8, 63A-H2.11) and adequate funding for such agencies as the Children's Bureau (63A-H2.1), the U.S. Interdepartmental Social Hygiene Board (66A-H2.1), and the U.S. Employment Service (66A-H2.7). Other petitioners championed the causes of persons who suffered from disasters such as the heirs of the passengers who perished when the steamer General Slocum burned in New York harbor in 1904 (60A-H3.6).

3.14 Petitioners also supported the preservation of battle monuments (56A-H1.1) and Abraham Lincoln's birthplace (61A-H2.4) and protested the abolishment of pension offices in the States and the consolidation of pension activities in the Washington, DC office (59A-H1.1, 60A-H3.2, 61A-H2.1) and the proposed fortification of the Panama Canal (63A-H2.8). Some petitioners sought funding for a veteran's encampment at Vicksburg, MS, intended to commemorate the Civil War semicentennial (63A-H2.4) and for road construction and improvement (60A-H3.7). Others favored enforcement of anti-trust laws against labor unions (63A-H2.6) and the adoption of a new national budget system (66A-H2.6).

3.15 The petition and memorial files for this committee are missing for the 67th through 79th Congresses (1921- 46) except for three Congresses: the 73d, 75th, and 76th. These three Congresses cover most of the Great Depression years, and the petitions and memorials reflect the economic conditions in the nation. Petitioners were concerned about the funding of relief agencies such as the Works Progress Administration (WPA) and some of its programs: The Federal Art, Theatre, and Music projects (75A-H2.6, 76A-H2.16, 76A-H2.4, 76A-2.6, and 76A-H2.7). They demanded additional aid for public works (73A-H2.1), emergency aid for public schools (73A-H2.4, 75A-H2.1), and the restoration of benefits to war-disabled veterans (73A-H2.12). They also requested funding for public health activities and research (73A-H2.9), the control of venereal diseases (76A-H2.15), flood control and flood relief (75A-H2.3), and a study of Dutch elm disease (76A-H2.3). Not all petitioners wanted to expend Federal funds, however; some advocated the reduction of federal expenditures (75A-H2.5). 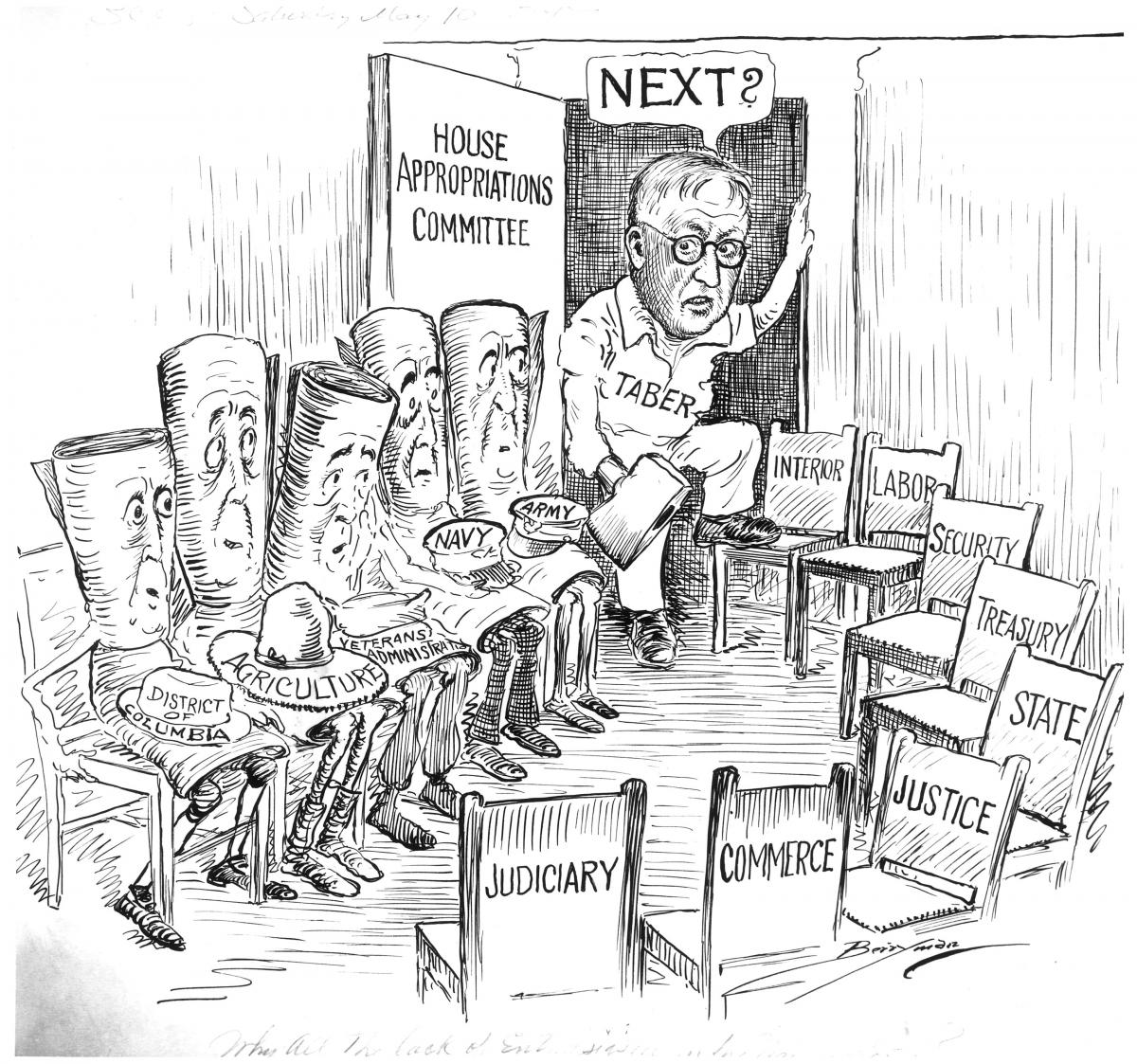 Untitled Berryman Cartoon dated May 10, 1947 from the Berryman Political Cartoon Collection. Rep. John Taber was the head of the House Appropriations Committee in 1947. In May 1947, the committee was attempting to determine the budget for the next fiscal year. This time marked a point of economic recession for the United States, and thus the funds appropriated to the different departments was being dramatically reduced. RG 46, Records of the U.S. Senate, National Archives.

3.17 The committee papers from the first 22 years of the committee's existence (1865-87) are arranged by executive department or agency and consist primarily of documents demonstrating the work of each organization, and its need for funding. In addition to the Agency files, certain records are filed by subject such as the records relating to the 1882 yellow fever epidemic in Florida and Texas (47A-F3.20). The records are substantially an extension of those of the Ways and Means Committee prior to 1865, reflecting that committee's filing practices and the influence of Chairman Stevens.

3.18 The committee papers for most Congresses during this period include records for the executive Departments—Navy, Post Office, Treasury, State, War, Agriculture, Interior, and Justice. These Department records are sometimes further broken down and filed by bureaus or programs within the departments; the records of the Interior Department, for instance, are variously filed under the following subcategories: Indians, General Land Office, Pensions, Patent Office, personnel, public buildings, commissions, public lands, and a general category. The records consist of correspondence describing the personnel, conditions, resources, needs, programs, and other data relative to the appropriations of the Agency or Department.

3.19 In addition to records for the executive departments, files relating to claims, the District of Columbia, the Smithsonian Institution, federal courts including the Court of Claims, the House of Representatives, the Office of the Public Printer, and the Library of Congress are found regularly among the records between 1865 and 1887. During this period, committee correspondence is documented in two letterpress copy books which contain copies of the outgoing correspondence of the committee between the 40th and 51st Congresses, 1867-91 (40A-G2.21, 46A- F3.23).

3.21 Beginning in the 66th Congress (1919-21) the committee papers consist largely of bound volumes of incoming letters received. The letters are arranged chronologically and are numbered and indexed. The index cards are preserved along with the correspondence in most cases. These correspondence files may be quite voluminous; for instance, the correspondence file for 1921-23 (67A-F2.2) includes 801 letters (18 in.) and a card file indexing the letters (9 in.).

3.24 The Appropriations Committee Subcommittee To Investigate Subversive Activities was appointed to investigate the charges made on the floor of the House by Martin Dies on February 1, 1943 against 39 named employees of the Federal Government. The records of the subcommittee (78A-F3.2, 5 ft.) include administrative records (4 in.); transcripts of executive session hearings (3 in.); and investigative records relating to certain government employees including staff memoranda, investigative reports from the Federal Bureau of Investigation, transcripts of testimony taken by the House Un-American Activities Committee and other documents (4 ft., 6 in.).

6. See for example Journal of the House of Representatives of the United States, 52d Cong., 1st sess., Appendix p. ii. [Back to text]