Records of the Veterans' Affairs Committee and Its Predecessors

Committee records described in this chapter:

20.2 Before 1924, the Committees on Pensions and on Invalid Pensions had dealt with the pension problems of individual veterans, and the Ways and Means Committee had been responsible for writing the majority of the legislation relating to veterans. All three of the committees continued to exist after the World War Veterans' Legislation Committee was created. In 1947 the World War Veterans Legislation Committee was renamed Veterans' Affairs, and its jurisdiction expanded to include the subjects that had been referred to the committees on Pensions and Invalid Pensions which were abolished under the reorganization of that year.

20.3 This committee was established on January 18, 1924, with jurisdiction over matters relating to the following subjects:

20.4 On January 24, 1944, the jurisdiction of the committee was enlarged so as to include the veterans of World War II. Two years later the Legislative Reorganization Act of 1946 abolished the committee and incorporated its jurisdiction into that of the new Committee on Veterans' Affairs.

20.5 The minutes document only the executive session meetings in April and May of 1944 on S. 1767, the veterans "GI Bill of Rights." There are no minute or docket books that document the activities of the full committee. 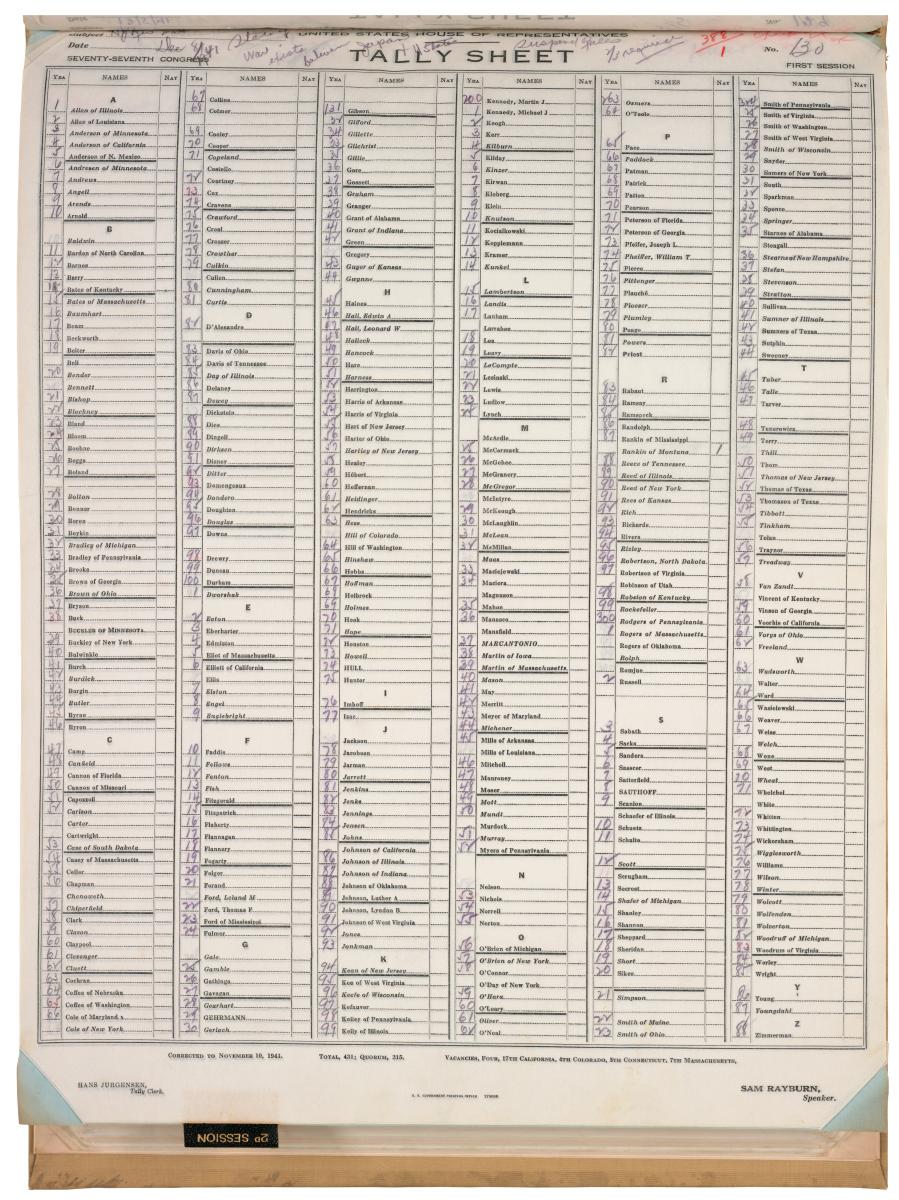 Tally sheet for Declaration of War against Japan, dated December 8, 1941. RG 233, Records of the U.S. House of Representatives, National Archives.

20.6 Few petitions and memorials were referred to the committee. One petition drive accounts for over 95 percent of the petitions received by the committee during its 22-year history. During the 78th Congress (1943-44) a massive petition drive urged Congress to pass H.R. 3917, a bill to establish a GI bill of rights to provide Federal aid for the readjustment of World War II veterans to civilian life and S. 1617, its Senate counterpart (78A-H21.5, 42 ft.). Demands for amendments to the resulting legislation account for a far less voluminous but still substantial number of petitions among the records of the 79th Congress (79A-H22.2, 4 in.).

20.7 Petitions for the construction of hospitals and domiciliary facilities for veterans appear in the records of every Congress. The citizens and legislatures of various States appealed to Congress to build these institutions in their States. Typical of these petitions are a concurrent resolution from the State legislature of Indiana requesting appropriations for a hospital in that State (69A-H19.1) and a resolution passed by the State Senate of Michigan asking that a hospital be constructed in Wayne County (68A-H22.1). Some 10 years later, organizations in Michigan were still petitioning for a hospital to be built near Detroit, in Wayne County, to enable Michigan veterans to be hospitalized in their home State (74A-H21.1).

20.8 Depression era legislation intended to balance the budget through various economies including reductions in the pensions and other benefits due veterans, was the concern of numerous petitioners. During the 72d Congress (1931-33) the committee files contain petitions begging that veterans' benefits not be reduced and that legislation pertaining to veterans of the Spanish American War not be repealed, and others protesting the National Economy League's proposals to reduce veterans' hospitalization and other benefits (72A-H17.1). After passage of the Economy Act of March 20, 1933, the files of the 73d Congress (1933-34) contain petitions demanding restoration of the veterans' benefits that had been reduced under the legislation (73A-H22.3, 73A-H22.4).

20.9 Other subjects of petitions and memorials included passage of a bill to provide for the retirement of disabled emergency officers in the Army during World War I (68A-H22.1), amendments to the war risk insurance legislation (71A-H19.1, 74A-H21.3), payment of adjusted compensation (73A-H22.2), Federal provision of artificial limbs to veterans (75A-H20.3), Government protection and compensation for the widows and children of deceased veterans (76A-H27.3), rehabilitation of veterans (78A-21.4), automobiles for amputees (79A-H22.1), and criticism of the operation of the Veterans Administration (79A-H22.5).

20.13 Among the 77th and 78th Congress records are also documents from the American Legion including its annual reports and financial statements, and from the American Veterans' Association (77A-F39.1, 77A-F39.2, 78A-F39.3).

20.14 The records that are filed under the heading "bill files" consist primarily of copies of printed bills or resolutions and the related reports and hearings.

20.15 This committee was established under the Legislative Reorganization Act of 1946; its jurisdiction included the subjects that had been referred to the committees on World War Veterans' Legislation, Pensions, and Invalid Pensions before they were abolished by the Act.

20.16 The creation of the Veterans' Affairs Committee brought all veterans' legislation into the consideration of one committee. Prior to the consolidation of committees under the 1946 reorganization the dispersal of responsibility for veterans' affairs among the several committees caused concern as to the fairness and equality of treatment. George Huddleston described the problem as it appeared in 1924 although the solution was not achieved for another 22 years:

20.17 The formal jurisdiction of the Veterans' Affairs Committee includes matters relating to:

20.18 No minute books, docket books, or bill files from this committee are currently held by the National Archives. The activities of the committee and its relationships with constituents, interest groups, and the agencies in its jurisdiction are documented, however, in the petitions and memorials received by the committee and in large correspondence files that have been preserved.

20.19 The petitions and memorials document the concerns of veterans on a variety of subjects which included: pensions for veterans of both World Wars and the Spanish American War (81A-H12.1, 86A-H13.1); the Servicemen's Readjustment Act (81A-H12.2); a peacetime GI bill (86A-H13.1); an increase in the veterans' education allowance (86A-H13.1); the opening of numerous veterans' homes (86A-H13.1); and appropriations for VA hospital, domiciliary, and medical programs (81A-H12.3, 83A-H12.1). By far the largest number of petitions and memorials received pertained to various veterans' hospitals. Large numbers of petitions express the interest of veterans throughout the country in the construction and administration of specific veterans' hospitals such as the Schick Hospital in Clinton, IA (80A-H12.1, 82A-H13.1), the Barnes' Veterans' Hospital in Vancouver, WA (83A-H12.2), and a new VA hospital in South Texas (85A-H14.1). During the 89th Congress (1965-66) the committee received a large number of petitions and memorials protesting the closing of VA hospitals in Lincoln, NE; Miles City, MT; Rutland Heights, MA; and McKinney, TX; a domiciliary in Clinton, IA; regional offices in Juneau, AK; Sioux Falls, SD; Cheyenne, WY; and various other VA facilities (89-VA-5).

20.20 Interest in the construction and utilization of VA hospitals motivated several intense and well organized petition drives. A huge roll petition containing over 160,000 signatures was presented to the committee by the United Veterans Organization of Clinton, IA, on April 23, 1947. The mile-and-a-half long document claimed to be, "a petition coming from every city, town, village, and hamlet of Iowa, Illinois, Wisconsin, and part of Missouri, Indiana, and Ohio," and urged that the Schick Hospital be reopened (80A-H12.1).

20.21 The activities of the committee are well documented by the committee papers files. Several types of files appear regularly. For each Congress there is a full committee reading file, consisting of pink carbons of outgoing communications arranged alphabetically by the name of the correspondent (total 48 ft.). For each Congress there is a subject correspondence file which consists of the letters received and copies of the committee's responses arranged alphabetically by subject (145 ft.). The committee papers from 1947 through 1960 also contain correspondence files of Edith N. Rogers (10 ft.), who was committee chairman during the 80th and 83d Congress and ranking minority member until the 86th Congress.

20.23 The committee papers files include collections (varying in degree of completeness) of the printed bills and resolutions referred to the committee and the printed reports, hearings, and committee prints produced by the committee. The committee produced an unusually large number of committee prints during each Congress, averaging almost 400 per Congress during the period under consideration. These prints provide access to a wide range of information regarding the work of the committee and other veterans organizations. The committee regularly printed the correspondence containing the comments of the Veterans Administration on proposed legislation; a chart of the resolutions adopted by the national conventions of the American Legion, American Veterans of World War II, Disabled American Veterans, Regular Veterans Association, and the Veterans of Foreign Wars; compilations of laws relating to veterans and their families; an index to all hearings held by the committee during each Congress; summaries of recent veterans legislation before Congress and recent changes in the laws affecting veterans; the findings of studies done by the committee staff or other government agencies; and correspondence received from the major veterans organizations. The committee also printed an index to its committee prints for each Congress that is usually included among its printed material collection.

20.25 The National Archives, however, does hold records of several investigations conducted by the committee between 1953 and 1958. These consist of records documenting investigations of the following: the Tuscaloosa Veterans Administration Hospital (83A-F16.1, 2 in.); the Veterans Administration loan guaranty program in 1955-58 (85A-F16.6, 6 ft.); the fund raising activities of organizations acting in the name of veterans (85A-F16.5, 6 ft.); and an investigation of certain housing projects in New Jersey in 1955-57 (85A-F16.7, 4 ft.). The records contain a variety of files and documents. Those of the housing investigation, for example, consist of files on direct loans, entitlement sales, minority housing, foreclosure practices, interest rates, homes for paraplegics, appraisal and inspection reports, and complaint correspondence.