WASHINGTON, June 20, 2019 — When four University of Virginia (UVA) graduate students used National Archives records to compile data for a team project they had no idea just how valuable their research would become to thousands of Vietnam veterans across the nation. 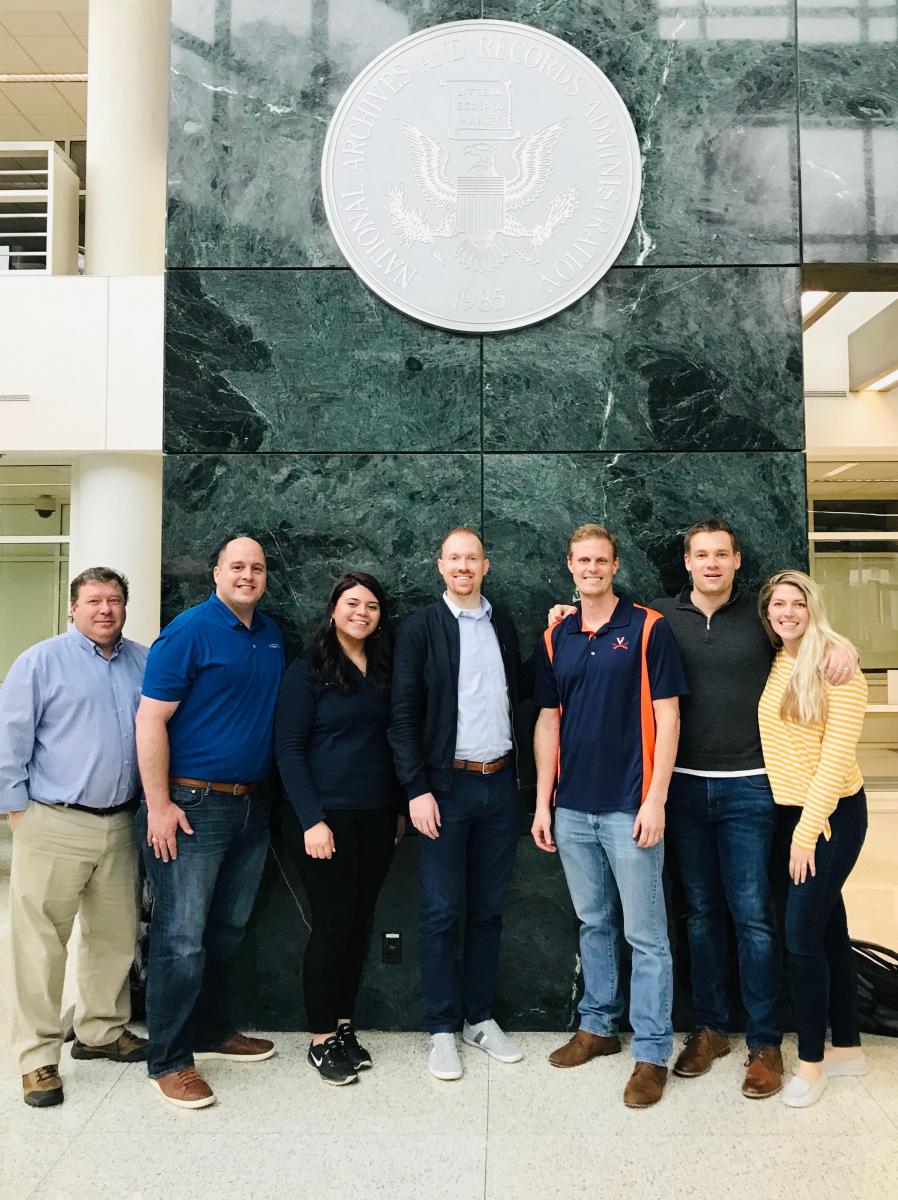 UVA graduate students used U.S. Navy deck logs from the National Archives at College Park holdings to record the coordinates of certain ships during the Vietnam War. They used the data to create a tool pinpointing the exact location of the ships during the conflict and helped veterans show their presence in Agent Orange zones. (From left to right: Mike Brown, Brian Harris, Sabrina Castellanos, Alexi Himarios, Nathan Sable, Jackson Sutherland, and Kayli Westling.)(Photo courtesy of Brian Harris)

The students’ project used U.S. Navy deck logs—held at the National Archives at College Park and available via the online catalog—to pinpoint locations of various ships during the Southeast Asia conflict. The deck logs formed a chronological account of notable events occurring in and around a ship, reminded the officers of the deck of their duties, and checked on the activities of the officers. They also served as evidence in legal proceedings in naval, admiralty, or civil courts when necessary.

More important, the deck logs contained the coordinates of where the ships traveled during their time in service, information that can help prove a veteran’s exact location during the war.

The students—Brian Harris, Alexi Himarios, Jackson Sutherland, and Matthew Jacobs, all enrolled in the Master of Science in Business Analytics program at UVA—used the information collected from the log books to create a database showing which ships were in the Agent Orange exposure zone, which was defined by legislation as within 12 nautical miles of a boundary off the coast of Vietnam.

Agent Orange was a powerful herbicide used by U.S. military forces during the Vietnam War to eliminate forest cover and crops for North Vietnamese and Viet Cong troops. Agent Orange contained the deadly chemical dioxin, which was later proven to cause serious health issues—including cancer, birth defects, rashes, and severe psychological and neurological problems, such as Parkinson’s disease—for Vietnamese people and also for returning U.S. servicemen.

In the past, veterans exposed to Agent Orange while at sea have been denied benefits. The deck logs could now hold the key for some Vietnam veterans who served aboard those ships during the conflict to receive benefits in the future based on their proximity to the exposure zone.

Harris explained that their tool uses digitized records of ship coordinates to map the ships that passed within the exposure zone.

“We used the coordinates to plot 24 ships’ paths during the Vietnam War,” Harris said. “We then compared these paths to the established ‘Agent Orange Exposure Zone,’ as defined by the Blue Water Navy Vietnam Veterans Act—the exposure zone is bounded by 12 points, and any ship that passed within 12 nautical miles of this zone is eligible.”

Until a Federal court decision in January 2019, many veterans aboard vessels were denied benefits for exposure to Agent Orange unless they were deemed to be in the combat zone, like service members who served on the ground or patrolled inland rivers. That Federal court decided that the Department of Veterans Affairs (VA) must extend benefits to those who served offshore as well. And that’s where the UVA students’ new tool and the deck logs held at the National Archives come in.

The students explained that their tool has a dual purpose. It can be used by VA claim processors to establish whether a veteran who was aboard a certain ship during a certain time period is eligible for Agent Orange benefits. The tool accomplishes this by identifying whether a ship passed through the exposure zone, and if it did, on which dates. In addition, the tool can be used by veterans or their families to help determine if they were on a ship when it passed through the exposure zone.

“We searched the Navy deck logs available in the National Archives Catalog, which pulled from Record Group: Records of the Bureau of Naval Personnel,” Harris said. “We then combed through logbooks of U.S. Navy Ships and Stations by ship and by month and manually entered the GPS coordinates that each ship recorded daily.”

Harris explained that the team accessed the logbooks via the online catalog. “We spent a Saturday transcribing coordinates into an Excel document,” he added. “We had a pretty good system going but even so, it was a slow and tedious task.”

“We made the tool interactive so that the veteran or his family can select their ship and see where it was, what campaigns it was in, who the commander was, and if they are eligible for Agent Orange benefits,” Harris said.

“It’s such an important issue with real-life implications for veterans,” he added. “It was fun, challenging, and rewarding working as a team on something we all cared about. We hope that this tool allows eligible veterans to receive the benefits that they are entitled to more quickly and efficiently.

“Our efforts in digitization are an important piece in achieving three of our agency’s strategic goals: making access happen, connecting with customers, and maximizing our value to the nation,” Wright said. “We currently have over 85 million digital records available in the catalog. We have added more digital copies of our records to our online Catalog each week in 2019 than we  were able to in the first decade of our Catalog project. Our goal is to have 500 million in our Catalog by 2025, and the long-term vision is to have copies of all of our records available online one day.”

The UVA team agreed that having the deck logs digitized was crucial. “It’s so great that these deck logs were digitized—if they weren’t, this project would not have been feasible,” Harris said, adding that they would like to continue to transcribe ship coordinates for the remaining approximately 700 ships that were in the Vietnam area of responsibility. “We are going to experiment with machine learning to see if we can automate this task in the future.”

Although the tool wasn’t specifically used in the most court case mentioned above, Harris explained its implications.

“Now that the courts have ruled that the VA must provide benefits to Blue Water veterans, the VA will need to have a way to process these claims,” Harris said. “This tool will help the VA process claims efficiently.What currently would take an analyst weeks of research can be done in seconds with this tool.”

Himarios added that a couple of veterans have already reached out to them about the Agent Orange tool and have asked whether they can include their ships in it. “Right now those deck logs aren't digitized, so we would have to go to the National Archives and scan those deck logs to get the coordinates. I think it highlights the need for digitization and the importance of the volunteer work to scan these records,” Himarios said.

Moving forward, the team said “We would love it if Muster Rolls were digitized. This would allow us to find out exactly which sailors were on eligible ships at the time that they were in an exposure zone.” Muster roll data provide unique access to information about enlisted seamen, including their names, place of birth, age, and physical description.

The National Archives at College Park maintains Logs for year 1941 and later and Logs of the Military Sea Transportation Service and Military Sealift Command. For information regarding records located at Archives II, please ask your questions on HistoryHub.