The Papers of Charles McCarthy

Charles McCarthy (1873 –1921) was a political scientist, Progressive reformer, and briefly, an American football coach. He is credited with founding the first legislative reference library in the United States. McCarthy authored The Wisconsin Idea, a summary of Progressive philosophy and thinking. Many of the reforms he advocated focused on removing corruption from politics and waste and inefficiency from government, the recall of judicial decisions, easier amendment of the Constitution, and women's suffrage as means to accomplish this. It also called for improvements in social welfare for women and children, workers' compensation, farm relief, mandatory health insurance in industry, and new inheritance and income taxes. McCarthy’s papers primarily cover the years 1896–1967. 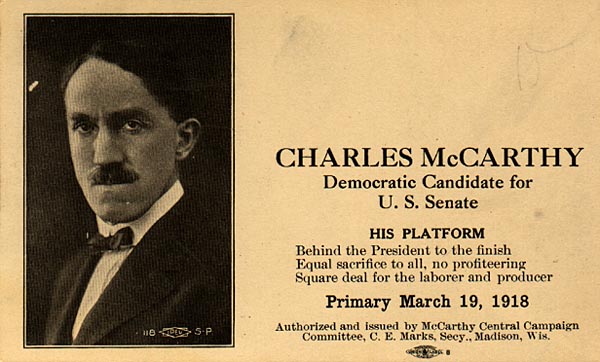