The Moravian Spring Mission Among the Cherokees

In 1801 the Moravians, a Pietist German-speaking group from Central Europe, founded the Springplace Mission at a site in present-day northwestern Georgia. The Moravians remained among the Cherokees for more than thirty years, longer than any other Christian group. John and Anna Rosina Gambold served at the mission from 1805 until Anna’s death in 1821. The principal author of the diaries, Anna, chronicles the intimate details of Cherokee daily life.

This edition of the diary includes the entire text in translation as well as a critical apparatus, contextual introductory material, and extensive notes. Rowena McClinton’s translation from German script, an archaic writing convention, makes these primary eyewitness accounts available in English for the first time. These diaries will be of immense value for understanding Cherokee culture and history during the early nineteenth century and missionary efforts in the South during this time. McClinton gained unlimited access to the diaries and other supporting documents for the completion of this project, published with the consent of the Moravian Church of the Southern Province. 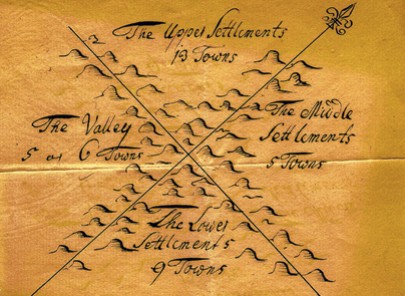 Map showing the settlements of the Cherokee Nation as drawn by Moravian missionary John Daniel Hammerer, 1766