The Black Arts Movement was a Black nationalism movement that focused on music, literature, drama, and the visual arts made up of Black artists and intellectuals. This was the cultural section of the Black Power movement, in that its participants shared many of the ideologies of Black self-determination, political beliefs, and African American culture.

Search the Catalog for Records on the Black Arts Movement

Prominent Figures of the Black Arts Movement at the National Archives

Marguerite “Maya” Johnson was born in St. Louis, Missouri. She was a writer, poet, activist, and actress. Angelou was exposed to the Civil Rights Movement and African culture during the 1960s. In the 1970s, she began her writing career, focusing on stories and anecdotes based on her life, Blackness, and feminism. In 1993, Angelou became the first poet to recite a poem at a presidential inauguration since 1961. Records at the National Archives related to Maya Angelou consist of appearances at Federal events and her time on tour with a production of Porgy & Bess. 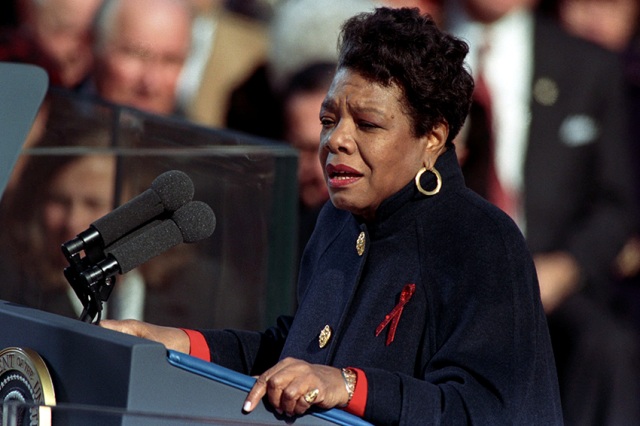 Amiri Baraka was born Everett LeRoi Jones in Newark, New Jersey on October 7, 1934. In 1954 he earned a bachelor’s degree in English at Howard University. Following graduation, Jones joined the military and served three years in the Air Force. After receiving a honorable discharge, he settled in Greenwich Village in New York and began to interact with various musicians and artists. While living in New York, Jones became a well-respected novelist and poet for his writings on Black liberation and white racism. He also met Hettie Cohen, a Jewish writer. Later on, the two married and co-edited the literary magazine Yugen. They also founded Totem Press, which focused on publishing the works of political activists. Jones taught at several colleges and universities before changing his name to Amiri Baraka. Baraka continued to publish literary works for over 50 years until his death in 2014. Records at the National Archives pertaining to Amiri Baraka include a sound recording of Baraka reciting a poem that was considered to be an un-American activity.

James Arthur Baldwin was born August 2, 1924 in Harlem, New York. After graduating from high school in 1942, Baldwin began writing. In 1953, he published his first novel Go Tell It on the Mountain. Prior to releasing his first novel, Baldwin chose to leave America and move to France because of his dissatisfaction with the open racism and homophobia in the United States. In 1962, he visited the United States in order to participate in the the Civil Rights Movement, namely attending the March on Washington (seen in the photo). During the height of the struggle for Black equality, Baldwin was widely known for his militant essays that illustrated the social and economic plight of Black Americans. His writings addressed the issues of race but also mentioned the complexity of homosexuality and sexual orientation among the Black experience in the U.S. After the assassination of Dr. Martin Luther King, Jr. in 1968, Baldwin returned to France and continued writing until his death in 1987. Records at the National Archives pertaining to James Baldwin include moving images from the Peace Corps, the Agency for International Development and an interview with Pulitzer Prize winner Gwendolyn Brooks.

Gwendolyn Brooks was an American poet and teacher and is known as the first African American woman to win a Pulitzer when she was awarded the Pulitzer Prize for Poetry for her work Annie Allen (1950). Brooks was born on June 7, 1917 in Topeka, Kansas. Six weeks after her birth, the Brooks family moved to Chicago. Growing up in Chicago and attending majority white, then Black, and then integrated schools gave Brooks a varied perspective on racial dynamics in America which would later come to influence her future work. In the 1940s Brooks became heavily involved in attending poetry workshops in Chicago, in particular workshops organized by Inez Cunningham Stark. World renowned poet Langston Hughes stopped by one of these workshops and after hearing her recite her poem "The Ballad of Pearl May Lee” he became a fan of her work and acted as her mentor.

She published several works of poetry including A Street in Bronzeville (1945), and In the Mecca (1968) which both earned critical acclaim. One of her better known poems “We Real Cool” was published in her third book of poetry, The Bean Eaters (1960), and is widely studied in literature classes and re-printed in literature textbooks. Brooks taught poetry and writing around the country at several well known colleges and universities such as the University of Chicago, Columbia University, and Elmhurst College and continued on in that respect until her death on December 3, 2000 in her hometown of Chicago.

Nikki Giovanni is an American poet, writer, commentator, activist, and educator. Giovanni was born as Yolande Cornelia "Nikki" Giovanni, Jr. on June 7, 1943 in Knoxville, Tennessee. She attended Fisk University receiving a B.A. in History and later went on to attend graduate school at the University of Pennsylvania and Columbia University. Giovanni’s work covers topics ranging from race and social issues explored through poetry anthologies, poetry recordings, and nonfiction essays. She was a prominent figure in the Black Arts Movement of the late 1960s and her work was heavily influenced by the Civil Rights Movement and the Black Power Movement. Her poetry during this period in Black Feeling, Black Talk and Black Judgement, reflected a strong African American perspective and because of this she was hailed as the "Poet of the Black Revolution." Over the years Giovanni would shift her focus to children’s literature, human relationships, women writers, and hip hop. Currently, Giovanni works as an University Distinguished Professor at Virginia Tech where she teaches courses on writing and poetry.

A native of Chicago, Illinois Lorraine Hansberry is known as one of the most significant and influential playwrights of the 20th century. She wrote the landmark play A Raisin in the Sun, which opened at Ethel Barrymore Theatre in New York City in 1959. A Raisin in the Sun was the first play written by an African American woman to be produced on Broadway. The play depicted the characteristics, emotions, and struggles of an urban Black family and eventually won a New York Drama Critics Circle Award and four Tonys for best play, director, actress and actor. Because of the success of the play, Hansberry was credited for breaking down racial barriers on Broadway and ushering in a new opportunity for African American women playwrights.

In 1961, she wrote the screenplay to A Raisin in the Sun in order to turn the play into a movie. The movie staring Sidney Poitier and Ruby Dee became as successful as the play and allowed the actors to gain considerable recognition for their roles. Hansberry’s second play, and only other production put on in her lifetime, The Sign in Sidney Brustein’s Window ran for 101 performances. The day that the play closed was the same day that Hansberry died at the age of 34 from pancreatic cancer. Hansberry had many other works, including writings for the Student Nonviolent Coordinating Committee (SNCC), and contributions to lesbian rights organizations. Records at the National Archives pertaining to Lorraine Hansberry include moving images among the records of the Agency for International Development and sound recordings of a radio broadcast.