Beginning in the 1880s, Congress passed a series of laws that excluded certain categories of immigrants from entering the United States. The Immigration Act of 1891 (26 Stat. 1084) created a federal immigration office charged with enforcing these exclusions. Specifically, the act required that federal immigration officers be stationed at major ports of entry to inspect immigrants upon arrival. These officers, known as Immigration Inspectors, were empowered to deny immigrants entry to the United States if the immigrants fell into one of the excluded classes. Inspectors’ decisions were final unless appealed directly to the Superintendent of Immigration (later known as the Commissioner-General of Immigration). 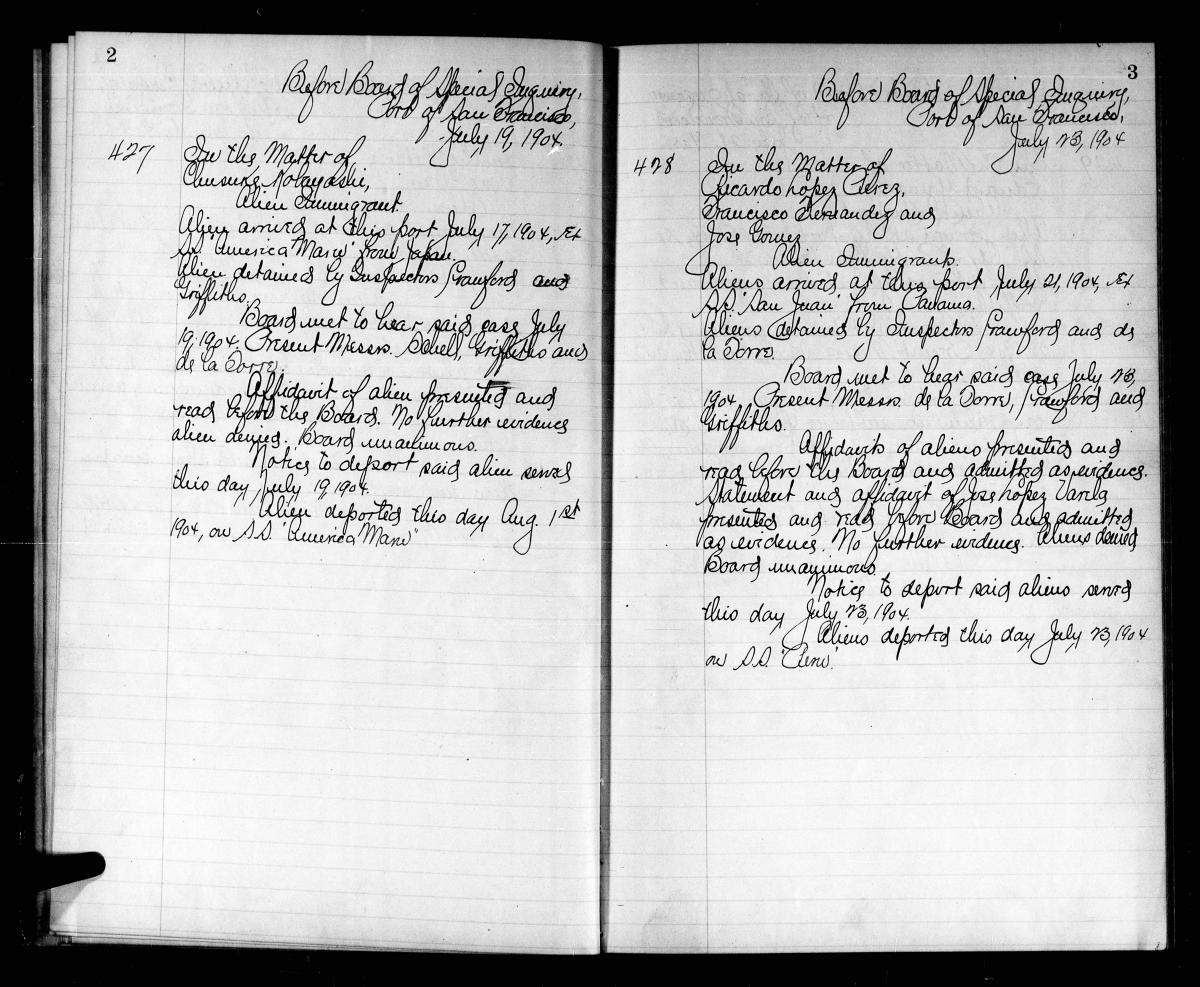 Minutes of the Board of Special Inquiry at the INS San Francisco Office, July 1904

The Immigration Act of 1893 (27 Stat. 569) revised this procedure by establishing Boards of Special Inquiry (BSIs) to review each exclusion case. These boards consisted of three Immigration Inspectors who heard testimony and accepted evidence in excluded immigrants’ cases. During these hearings, immigrants usually had the opportunity to explain their situation and the reasons why they should be admitted. Initially, all three members of the board had to agree to admit an excluded immigrant for that immigrant to be allowed into the United States; later, this provision was amended so that the majority of the board (two of three members) could admit an immigrant. If the BSI upheld the exclusion, the immigrant was deported. Subsequent immigration acts, including the Immigration Act of 1917 (39 Stat. 874, Sec. 17), further codified BSIs’ authority over exclusion and deportation procedures.

Between 1892 and 1924, ten percent or more of arriving immigrants were detained every day for a BSI hearing. Immigration Inspectors stationed at ports of entry often initially excluded immigrants under the “likely to become a public charge” (LPC) category because the immigrants lacked funds or did not have friends or relatives nearby who could support them. BSIs typically overturned these exclusions if an immigrant aid society accepted responsibility for the immigrant. If the BSI affirmed their exclusion under any category, however, immigrants could appeal their case to the Commissioner-General of Immigration in Washington, DC.

The Immigration and Nationality Act of 1952 (66 Stat. 163) eliminated BSIs and instead established special inquiry officers to review and decide deportation cases.

The National Archives and Records Administration (NARA) does not house records of all BSI hearings ever held. In most instances, the federal agency in charge of immigration—the Immigration and Naturalization Service (INS), now known as the U.S. Citizenship and Immigration Services (USCIS)—only preserved records of BSI appeals for eventual transfer to NARA. BSIs excluded and ordered the deportation of relatively few immigrants who had BSI hearings, and of those, even fewer appealed the decisions. Thus, NARA’s records document only a small fraction of all immigrants who had a BSI hearing.

National Archives at Fort Worth